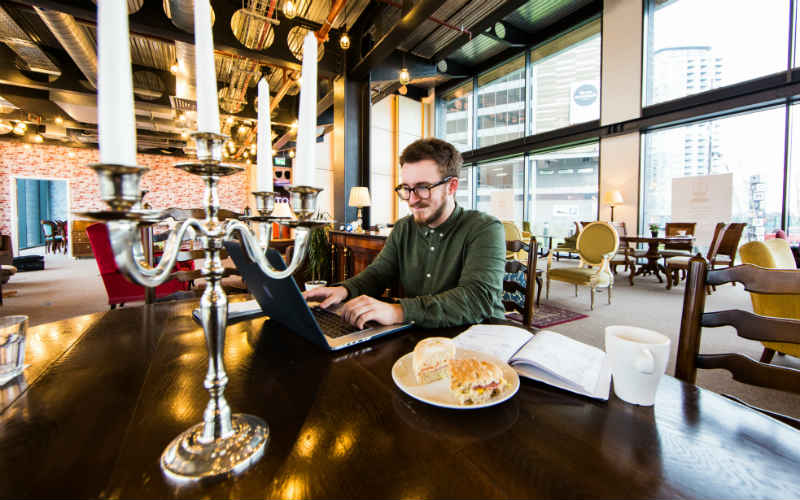 MANCHESTER, UK – Pay-as-you-go cafe Ziferblat has opened a new site at MediaCityUK on Salford Quays, Manchester – complete with sheds you can book out for meetings.

The cafe – which has a branch in Manchester’s Northern Quarter – has taken the ground and mezzanine floors of the Tomorrow building – charging eight pence per minute for unlimited teas, coffees, cakes, biscuits and snacks plus access to Wi-Fi, board games, magazines, and newspapers.

The branch will also be serving its takeaway Ziferblend coffee on an honesty box basis, meaning guests in a hurry can pay what they think the coffee is worth as they leave.

Ziferblat MediaCityUK also has four meeting spaces and two sheds which will be used for community events and private hire. The space can accommodate meetings for two to 100 people as well as larger conferences for up to 250 delegates.

Simon Kaye, Business Development Manager at Ziferblat, said: “The pay-as-you-stay concept is an alternative to a café or co-working space, offering more comfort and flexibility for guests than these conventional venues. In the Northern Quarter, Ziferblat welcomes over 10,000 guests per month.”

Kaye said there would be another Manchester site announced before the end of the year.

The two sites will be linked up, however, via a digital ‘window’ between Ziferblat’s MediaCityUK and Northern Quarter sitting rooms, where live stream screens will give guests a real-time view of the other location.

Ziferblat is hosting a housewarming party on the May 24.