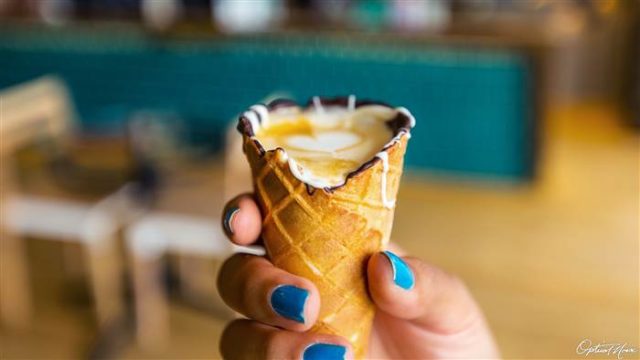 TORONTO, Canada – #CoffeeInACone: It’s part of the new generation of novelty snacks and drinks engineered not just for taste, texture, and mouth-watering appearance, but shareability.

It’s billed as “the most Instagrammable coffee in the world,” but unlike most social-media-ready coffee creations, it comes from a country where coffee is actually grown: South Africa.

The patent-pending confection, which is just what it sounds like — a coffee drink in a purpose-built waffle cone — is the brainchild of 30-year-old South African entrepreneur Dayne Levinrad.

Levinrad, who has spent years as a consultant to coffee shops in Australia, Brazil and Los Angeles, moved home to South Africa and was casting around for a “new and exciting way of a bringing people to the door.”

Recalling the passionate love people have for ice cream cones, and inspired by the perennial success of food mash-ups like the cronut, he hit on the idea to combine coffee and cone. (He’s not the first to ever try this, just arguably the most marketing-savvy).

“I wanted … to play on nostalgia and childhood,” he said. “It becomes quite a decadent experience because the (melting) chocolate mixes into the drink.”

If you think that sounds like a potential melty mess, you’d be right. After a great deal of trial and error, Levinrad landed on a blend of four different chocolates to coat the inside of the cone and prevent leaks.

Any creamy hot drink, such as a latte, cappuccino, matcha or hot chocolate, will work. The one exception is plain hot drip coffee, which tends to melt the chocolate a little too fast.

The beverage has to be slurped up within 10 minutes before structural failure becomes a concern.

And make sure to hold it at a 45-degree angle: Otherwise the drink will pour our over your wrist and onto the floor. Stores carrying the official product are supplied with a how-to poster.

Coffee in a cone was born last year at the Grind, Levinrad’s Johannesburg café. Shortly after its launch, it caught the eye of Aviv Weil at the African chapter of Creative Shop, Facebook’s small-business support program.

With Weil’s help it became a social media sensation. Interest in the drink — 50 million total online impressions, across all platforms, according to Levinrad — has far outpaced its availability.

Just over 4,000 posters have used the hashtag #coffeeinacone on Instagram, most of whom appear to be taking pictures of themselves with the treat in hand. Coffee in a cone is available at select cafes in Hong Kong and the U.K., and will soon be in Australia.

When the treat was featured on the CNN website in May 2016, Levingrad said he was still making the cones in his garage with help from his mother.

He’s since employed 30 local women to hand-turn the waffle cones at a factory in South Africa.

Levinrad loves that the product already has “fans all over the world, “ who may never try it themselves.

“People rally behind a good story,” he said. “(Maybe it will) damage the big retail gods who normally trump people like us.”