BELFORTE DEL CHIENTI, MC, ITALY – Nuova Simonelli, as a leading manufacturer of professional espresso coffee machines, has received the “Company to Watch 2013” prize. Recognition was awarded by Databank for being the best company in its sector and its strong performance in recent years, especially in terms of increased sales and exports.

A plaque was given to the President of Nuova Simonelli, Nando Ottavi, by Marco Crescenzi, manager of Cerved Group – Databank and a certificate issued listing the success factors that led to the award.

Nuova Simonelli over past four years has consistently increased revenue by an annual average of over 15% and has further developed its presence in foreign markets, in particular outside the 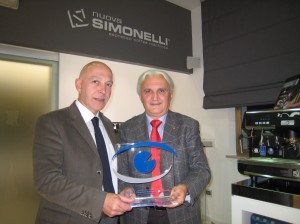 “These are very satisfying results” Nando Ottavi said during the award ceremony meeting with representatives of Databank at the company “which are based equally on the remarkable technological innovation of our products supported by continuous investment in research and development, as well as the extent and expertise of our sales network”.

Nuova Simonelli, with its two brands “Nuova Simonelli” and “Victoria Arduino”, operates in 115 countries around the world. In addition to the subsidiary in the U.S. it has offices in Canada, China, France and Spain, as well as about 800 dealers based in every continent, who can quickly meet the needs of large customers.