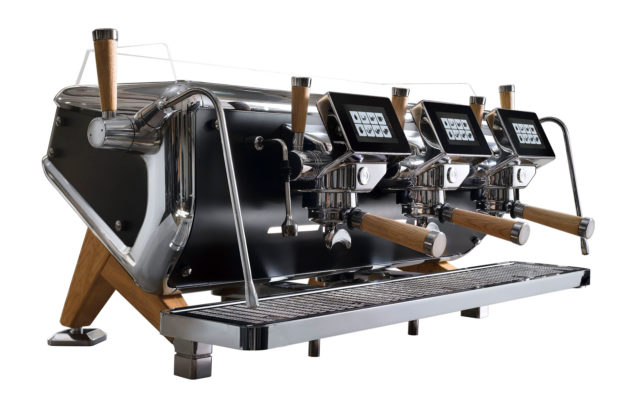 MILAN – The participation of Astoria Coffee Machines at HostMilano 2017 ended amidst great enthusiasm.

Storm, the new machine designed in partnership with internationally renowned baristas such as Caleb Cha (2015 WLAC Champion), Michalis Dimitrakopoulos (2016 WCIGS Champion) and Arnon Thitiprasert (2017 WLAC Champion), has literally conquered professionals, buyers, baristas and coffee enthusiasts from all over the world, thanks to its innovative technical features designed to enhance and facilitate the ritual of coffee preparation.

Amongst Storm’s most appreciated features are: ability to customize brewing by storing brewing curves; innovative “cool touch” Barista Attitude Steam; dry steam that facilitates milk foaming by minimizing initial condensation and preventing the formation of water micro-particles during steam dispensing; and, functional ergonomics, which allow baristas working in a more practical and comfortable way. A real jewel also for its aesthetic value, embellished by noble materials such as wood, stainless steel and aluminum.

“We are very pleased with Storm’s unanimous success; we received so many compliments, everyone wanted to see it and try it”, says Stefano Stecca, Sales Director. “Host proved once again to be a strategic marketplace to collect feedback and opinions about our products, and, upon returning to our company, we got to work in no time in order to follow up on some of the requests we received: I can say, with absolute certainty, that Storm will be further personalized in terms of body color (red, matt black, copper) and other details (chrome, matt black)”.

Not just Storm. Many other machines from the Astoria collection continue to generate interest and consensus. First and foremost, Hybrid, which is increasingly sough-after by hotels, food service chains and fast food parlors to be a perfect link between a traditional espresso and a super-automatic machine: fantastic quality in a cup, combined with extreme ease of use.

Indeed, Hybrid makes easy what, until now, could only be made a barista’s expert hands, and integrates the typical grinding, dosing and compressing steps of super-automatic coffee machines into a highly technological espresso machine.

“The ideal choice for all those who want to offer good espresso coffee without having to rely on the expertise of qualified staff”, says Product Manager Michele Salice. “Even more, HYbrid was showcased at HostMilano 2017 with important improvements: new milk system that allows making two drinks at the same time; more effective cleaning cycle; the innovative Internet of Things telemetry system that directly connects the machine to the Cloud Astoria, thus allowing Wi-Fi-based control of drinks delivered, for statistical purposes; display of machine operating status; and, management of the technical service, with the possibility of modifying settings, recipes and parameters”.

Great success also for the rich program of events, workshops and initiatives proposed by Astoria during the five-day fair.

In addition to Latte Art and Coffee in Good Spirits events held every day by Caleb Cha, Michalis Dimitrakopoulos and ArnonThitiprasert with the new Storm, the stand was animated by important guests such as Matteo Beluffi (2017 Latte Art Italian Champion), the Studio Adriano Design, which designed Storm and has been partnering with Astoria for many years, and Andrej Godina, who presented the book “Un caffè in Veneto”, in which Astoria is mentioned as one of the historical realities of the industry and was the protagonist of a sensory session during which coffee was prepared in different ways, leveraging the many customization possibilities offered by Storm.