Francesco Sanapo will fly to Uganda for a coffee hunting mission

From the 1st to the 10 of March, the coffee lover and creator of Ditta Artigianale will fly to Africa for the first time, along with photographers Flavio & Frank and director Stefano Conca Bonizzoni. The trip is supported by Volcafè and by technical partners Canon and Manfrotto

FIRENZE – This trip will mark Francesco Sanapo’s debut in Africa, he will fly to Uganda, from the 1st to the 10th of March for a coffee hunting mission. The coffee lover, multiawarded italian barista champion and creator of Ditta Artigianale is always in search of new coffee-producing countries, in order to know them better and to spread the quality coffee culture.

“I chose Uganda because it’s a developing country, constantly evolving – declared Sanapo – and that in this very moment is producing great specialty coffees.” The search for new coffee is not the only reason behind the trip, which will become a documentary and, later, a book that will recount coffee and the culture of this land.

Together with Francesco, documentary’s director Stefano Conca Bonizzoni and phorographers Flavio & Frank will be part of the team which will recount the experience. The journey is sponsored by Volcafè and counts Canon and Manfrotto as technical partners, while the artistic direction of the book will be carried out by Burro Studio.

“We will shoot a documentary and later we will create a book which will recount the coffee world to the people, I don’t want to talk only to ‘coffee nerds’, but to everyone – continues Sanapo – my goal, besides finding new coffees, is to raise the consumer’s awareness and to let him or her know the world that lies behind a cup, so that he or she could understand the value of a conscious choice.”

“I feel that it is my duty to give visibility to a land which is discovering its potential, my desire is a real mission now: for me, coffee is culture.” Francesco Sanapo, running around on a ‘boda boda’, the local motorcycle, will travel for hundred of miles, starting from the capital city of Kampala, where he will visit the local coffee shops that offer unique blends, in order to move to ‘Katanga’, the city slum, where he will meet the local kids who will take him for a tour of the neighbourhood. He will play music with local musicians, just before entering the impenetrable forest where mountain gorillas live, the perfect scenario for a coffee with unique properties. He will also visit the local farms, helping the farmers with their crop.

Stefano Conca Bonizzoni, director of the documentary: “The final result will be a tv series, a docu-series which, through the recounting of a country, will highlight less known aspects of coffee. What will emerge from it, is that the consumer has a huge power, and that the coffee system could greatly benefit from a collective raise in terms of awareness.”

Flavio & Frank, project photographers: “Usually we do different things, we deal mostly with fashion and celerities, but when Francesco proposed this project, we took it as a challenge. Through our pics, we will recount Uganda’s strong human factor, and we will try to glorify the authenticity of this country.”

Adriano Bagnasco is Volcafè Italy manager and among the biggest coffee traders worldwide: “we are thrilled to be part of this project, which has the goal of telling the peculiarities of coffee and its many varities, along with the high quality of Uganda-produced coffee for both Arabica and Robusta. A major concern on a global scale is that the markets are becoming more and more standardised in terms of origins, years ago there were many more coffee varieties being traded while in the last 20 years we’ve witnessed a standardization of the quality: the research for diversity is extremely important in order to guarantee the survival of the producers and the commerce of coffee in the world. Francesco’s journey represents a step in the direction of a return to these trends and of consumer’s awareness.”

Burro Studio, project art director: “We’ve been struck by Francesco’s will to give a pop touch to a subject such as coffee. We really liked his approach and the fact that he wants to recount coffee by going directly to its origins in Uganda while remaining true to the reality and authenticity of this country. When we will come back from the trip, we will process the obtained materials as well as our personal experiences to define the book’s concept, byt anyway the idea is to create something which anyone can appreciate, not only coffee nerds, but also simple enthusiasts, designers, food, travel or photography fans. We want to create a ‘glamorous’ and ‘pop’ item which can resonate with the largest possible audience.” 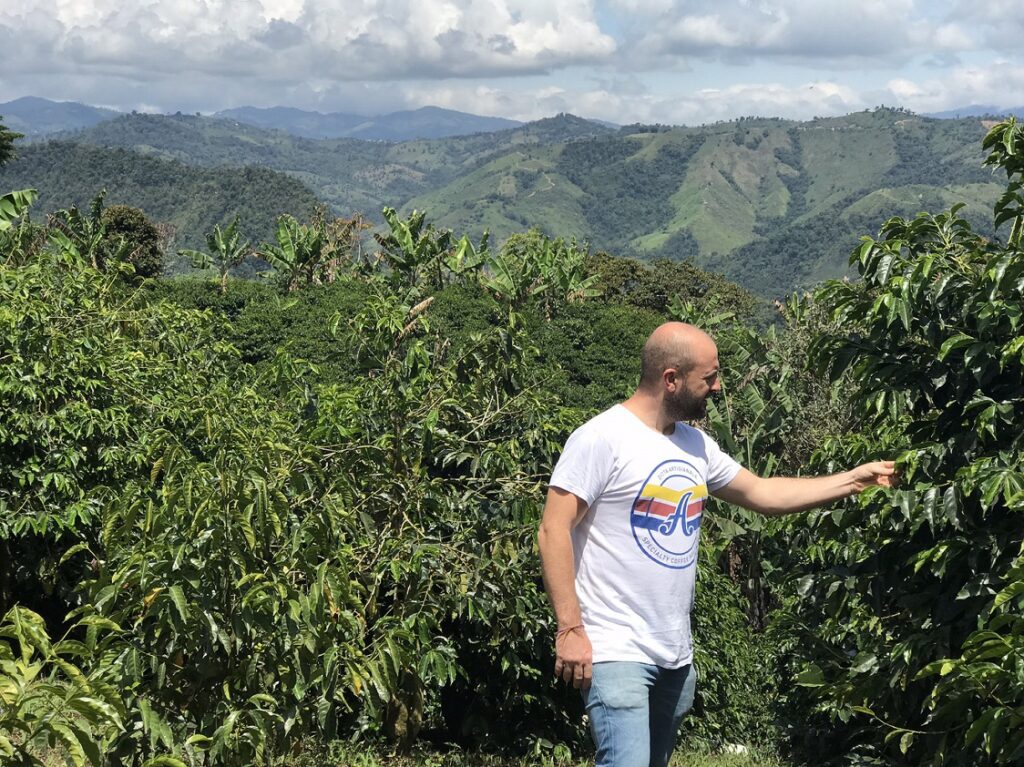 Francesco Sanapo, ‘coffee lover’ as he likes to call himself, was capable of combining his job with an incredible passion for coffee. In his many trips to the coffee origin countries, Sanapo has been on a constant search for the most exclusive and ethical prime materials, creating a direct contact with each and every single producer, based on trust and mutual respect. Sanapo has been three times italian barista champion, he took part in the 2013 WBC World Barista Championship in Melbourne Australia, ranking in sixth place worldwide. For a long time, in collaboration with Masterbar school by Caffè corsini, he is committed to education, training tomorrow’s barista champions and holding classes for professionists of the field as well as simple lovers. Among Sanapo’s many projects is Barista & Farmer, the first international talent show entirely dedicated to the world of quality coffee, whose 4th edition took place last june in Colombia. In 2013 he started his adventure in Ditta Artigianale, which was launched to glorify the quality of the italian craftmanship, applied to the coffee world. Coffee are available for sale in the two shops in Florence (via dei Neri 32/r e and via dello Sprone 5/r) and on www.dittaartigianale.it.