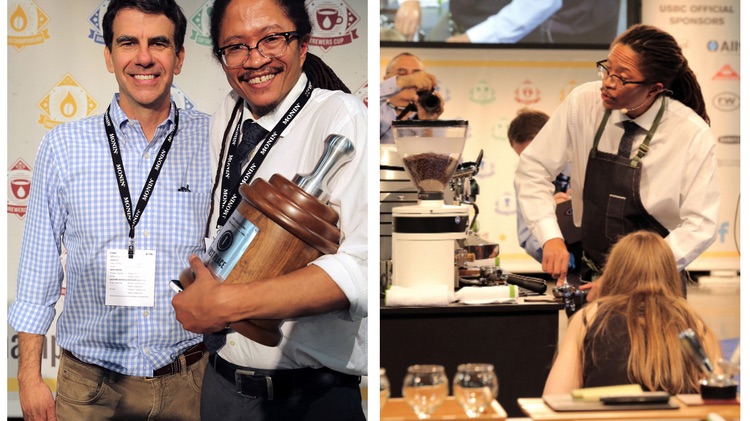 For Counter Culture Coffee’s most decorated barista, coffee isn’t a beverage – it’s an art. Over the weekend Lem Butler (PICTURES), head of wholesale customer support at the Durham coffee roaster, was recognized as the top barista in the nation at the U.S. Barista Championship competition in Atlanta.

Butler, whose next stop is the World Barista Championship in Dublin, Ireland in June, didn’t always take his caffeine so seriously, however.

Twelve years ago, before the coffee fame, he was just a barista, grinding beans at the Daily Grind in Chapel Hill.
Lem Butler is the top barista in the country and hails from Durham’s Counter Culture Coffee.

At the time, it was just a job.
“I didn’t think much of coffee back then,” he recalls. “My co-worker said, ‘hey man, you have to come out and support me in this barista competition.’ I thought he was joking.”

Butler recalls walking into the competition, held back then at Southern Season in Chapel Hill, and being “blown away.”

“It was three stations,” he says. “It was music. There were these baristas brewing coffee and making these crazy drinks. I was big into watching ‘Iron Chef’ back then and I just had to do it.”

So he and his self-described “cocky attitude” pranced into the next barista competition, confident that he’d be brewing up a victory. Instead, he placed 23rd out of 25th.

But something had been sparked.

His next brewing battle? He won a regional competition. And from there, his career really started to heat up. He went from just grinding beans to being in charge of quality control, rewriting the training manual. Eventually, he became general manager.

“But I felt like there was more to the coffee industry than what I saw just working in the shop,” he says. So he joined Counter Culture in 2007, initially as a coffee bagger. And even as a bagger, he was winning competitions.

A barista competition isn’t just brewing coffee, he says. He and nearly 50 competitors over the weekend in Atlanta were racing against the clock, preparing and serving four espressos, four cappuccinos and four signature espresso beverages in 15 minutes.

Lem’s specialty in the title competition was “SouthernPlayalisticCadillacCoffee,” an ode to Outkast and his Southern roots, complete with magnolia flower simple syrup, hibiscus (which brought about notes of chocolate and cranberry, he says) and nitrous oxide (for creaminess).

But you don’t need fancy ingredients to be a great barista, he says. The key is quality consistency.

“It’s hard to teach,” he says.
Counter Culture, which started in a 750-square-foot flex space in a Triangle strip mall in 1994, now has more than 80 employees and is putting the finishing touches on its new Durham headquarters.