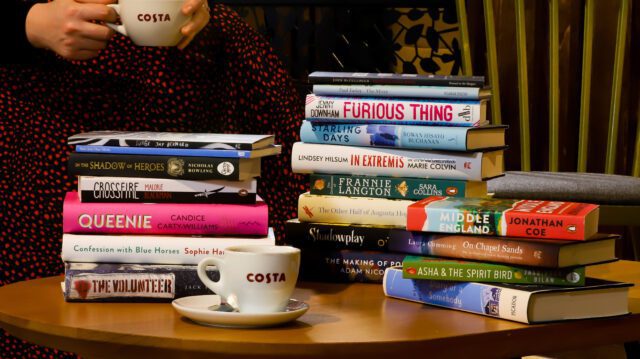 LONDON, UK – Costa Coffee has announced the shortlists for the 2019 Costa Book Awards. The 20 books nominated for this year’s Awards were revealed on BBC Radio 4’s Front Row programme. The Costa Book Awards is the only major UK book prize open solely to authors resident in the UK and Ireland and also, uniquely, recognises some of the most enjoyable books published in the last year across five categories – First Novel, Novel, Biography, Poetry and Children’s Book.

Winners in the five categories, who each receive £5,000, will be announced on Monday 6th January 2020. The overall winner of the 2019 Costa Book of the Year will receive £30,000 and be selected and announced at the Costa Book Awards ceremony in central London on Tuesday 28th January 2020.

Since the introduction of the Book of the Year award in 1985, it has been won twelve times by a novel, five times by a first novel, seven times by a biography, eight times by a collection of poetry and twice by a children’s book. The 2018 Costa Book of the Year was The Cut Out Girl, a story of war and family, lost and found by Oxford Professor Bart van Es.

To be eligible for the 2019 Costa Book Awards, books must have been first published in the UK or Ireland between 1 November 2018 and 31 October 2019 and their authors resident in the UK for the previous three years.

Diary of a Somebody by Brian Bilston (Picador)

The Confessions of Frannie Langton by Sara Collins (Viking)

Confession with Blue Horses by Sophie Hardach (Head of Zeus)

The Volunteer: The True Story of the Resistance Hero who Infiltrated Auschwitz by Jack Fairweather (WH Allen)

The Making of Poetry: Coleridge, the Wordsworths and Their Year of Marvels by Adam Nicolson (William Collins)

The Mizzy by Paul Farley (Picador)

Reckless Paper Birds by John McCullough (Penned in the Margins)

In the Shadow of Heroes by Nicholas Bowling (Chicken House)

Boncafe opens showroom in Yogyakarta to strengthen its presence in Ind...

Starbucks commits to a resource-positive future, outlines targets for ...