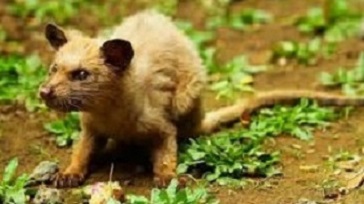 MILAN – Kopi luwak, the world’s most expensive coffee is made from poop, or rather, it is made from coffee beans that are partially digested and then pooped out by Asian palm civets. A cup of kopi luwak, as it is known, can sell for as much as $80 in the United States.

The animals are caged and force-fed these caffeine-laden coffee cherries all day, every day. Researchers for animal charity Lady Freethinker have recently discovered 20 of the animals, known as luwaks, being kept behind a private home on the island of Bali.

A researcher who works for the charity and who gave her name only as Diana, told the Mail Online that she found the typically nocturnal and solitary animals kept in sparse wire cages, stacked close together, in full sunlight without access to food or water.

She said all of the animals appeared skinny and one had a serious injury to its front right paw, likely from biting itself due to stress.

The luwaks were also pacing up and down – a compulsive behaviour that is typical of stressed and mentally ill animals, and likely a result of being constantly caffeinated due to their diet of coffee beans.

As part of her research, Diana said she also visited petting zoos where civets were kept in better conditions, though still far from ideal.

She said workers at these places told her that most civet coffee – known as kopi luwak, literally ‘coffee from a luwak – was farmed up in the hills of Bali.

The workers told her that the luwaks were kept free-range, ate coffee beans out of large feeders, and were treated well.

But, she adds, attempts to track the farms down to check on the condition of the animals proved impossible.

They are not marked on any map, and workers at the luwak petting zoos and coffee shops are not told where they are located.

Even while posing as a coffee buyer, she was unable to get access to the farms and was instead directed to the tourist coffee shops.

Tony Wild, the coffee buyer who first introduced kopi luwak to the UK, reports that one Indonesian farm alone claims to produce 7,000kg of the coffee per year from some 240 caged luwaks.

Sourcedailymail.co.uk
Share
Facebook
Twitter
WhatsApp
Linkedin
Previous article
Lavazza India launches project to spread the love for coffee on Valentine’s Week
Next article
There is a place in London where you pay £30 for a cup of bird droppings coffe