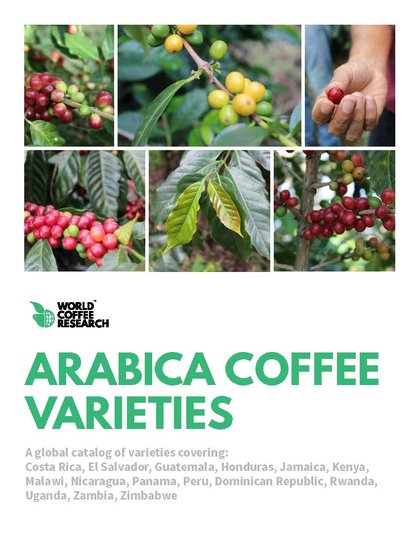 The catalog previously only covered varieties commonly found in and around Central America.

The catalog presents a breadth of information on each variety, from its appearance and key agronomic traits to its genetic background and intellectual property rights.

“We’re very proud to be expanding the catalog to include six African countries,” says Christophe Montagnon, scientific director WCR a lead author on the catalog.

“The catalog is a living document, and as we continue to expand its global reach, we hope it supports more and more farmers in one of the most difficult and important decisions they make for the long-term sustainability of their farms.”

The varieties catalog also includes information on which varieties are currently available through the World Coffee Research Verified program, which certifies coffee seed and nursery producers to improve the healthy, traceability and genetic purity of coffee plants. (The program is currently available in Central America.)

New insights into the history of coffee

Our knowledge of the genetic diversity of coffee is constantly improving. For this new edition of the Arabica Coffee Varieties catalog, we include some substantive updates based on new analysis of our DNA database, including the insight that there are in fact Typica and Bourbon “genetic groups,” to which the distinct Typica and Bourbon varieties belong (for example: SL28 is in the Bourbon group, but not the same as the Bourbon variety; SL34 and SL14 belong to the Typica group but are not the same as the Typica variety). The varieties in each group are genetically similar, like cousins, but they are not the same.

The groups of Typica and Bourbon originate from small, related populations that traveled from Ethiopia, to Yemen, and then to India. With each major geographical movement, often only one or a small handful of seeds from each group was taken to new places, resulting in “genetic bottlenecking” (the severe reduction of genetic diversity), leading to the emergence of the individual Bourbon and Typica varieties.

For example, after the Typica group was introduced to Indonesia from India, a single coffee plant was taken in 1706 from Java to Amsterdam and given a home in the botanical gardens.

This single plant gave rise to the Typica variety (just one variety among many in the Typica genetic group) that colonized the Americas during the 18th century.

But diverse populations of the Typica group remained in India, and from there made their way to Africa. Thus, in Africa today, there are many Typica-related varieties (such as SL34 and SL14) that are nevertheless distinct from the unique Typica variety that became dominant in Latin America in the 1800s.

The expanded Arabica Coffee Varieties catalog includes an updated introduction with a detailed history of the Bourbon and Typica genetic groups. The expanded catalog also includes revised information on the genetic groups for some varieties, confirmed through WCR DNA fingerprinting:

In conjunction with the online release of the expanded Arabica Coffee Varieties catalog, WCR is releasing a printed version of the catalog at this week’s African Fine Coffees Association (AFCA) conference in Kampala, Uganda.

Christophe Montagnon, WCR’s scientific director, participated in a session titled “Emerging Trends in Coffee—Coffee Varieties, Sensory, Robusta & Processing,” and the printed version will be distributed to all attendees, courtesy of UTZ/Rainforest Alliance.

The catalog supports broader efforts by WCR and its partners in Central America—and now Africa—to reimagine a coffee sector such that all farmers have access to healthy coffee plants and the tools to make good planting decisions in support of their goals.

To create the varieties catalog, WCR worked with coffee experts from across Central America and Africa, with funding from USAID and UTZ/Rainforest Alliance. The catalog is the result of visits to 16 countries and interviews with nearly 180 people from more than 100 private and public bodies involved in the national or regional coffee sectors of Central America, the Caribbean, and Africa.

For more information about World Coffee Research and its programs, please visit worldcoffeeresearch.org

World Coffee Research is a 501 (c)(5) nonprofit collaborative research and development program of the global coffee industry to grow, protect, and enhance supplies of quality coffee while improving the livelihoods of the families who produce it.  The program is funded and driven by the global coffee industry, guided by producers, and executed by coffee scientists around the world. worldcoffeeresearch.org