Workshop to discuss integration of smallholders in the value chain 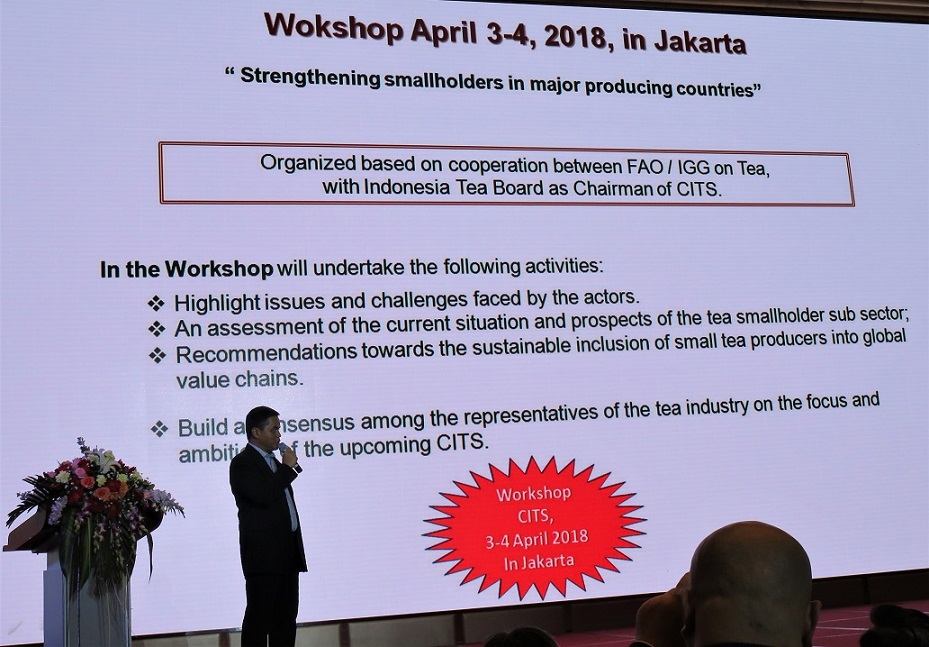 ROME, Italy – Credible data assess that tea smallholders cultivate around 70% of the global tea acreage and produce about 60% of the worlds tea leaves.

This vital contribution of the smallholders has now been fully recognized by the United Nations Food and Agriculture Organization, FAO, located in Rome, Italy.

Indeed at the 22nd  plenary session of the FAO Intergovernmental Group on Tea- IGG Tea, held in May 2016 in Naivasha , Kenya, it was agreed to establish the Confederation of International Tea Smallholders -CITS- with Rachmat Badruddin the CEO of Chakra Tea and Chairman of Tea Board of Indonesia in the chair.

In the coffee market the focus on small holders has been strong for many years, with the remit to encourage training and quality and to better empower these farming families.

Several associative structures have been operating for many years, such as “the Cup of Excellence” a quality championship held every year in a different coffee producing country, to which buyers travel from all over the world to acquire premium micro lots during the auction run on the spot.

There is also the “International Alliance of Women in Coffee”- IWCA, who targets the empowerment of the female coffee farmers.

In this context the first ever “world coffee producers meeting” has taken place in Medellin, Colombia in July 2017, with the attendance of former US President Bill Clinton and José Sette, the Executive Director of the International Coffee Organization – ICO based in London.

Similar to tea, the coffee economy is also based on a significant input from smallholders, which the ICO estimates to involve around 25 million families in the world.

According to the International Tea Committee’s Annual Bulletin of Statistics the output has grown hugely during the recent past, from 3,965 million tons in 2008 to 5,686 million tons in 2017, i.e. + 43%, and it continues to expand. Only 31% of the tonnage is exported  and hence over ¾ is consumed within the producing countries.

The tea economy faces the same main challenges as the coffee economy: threatening climate change and ever rising production costs. The need to ensure a robust and healthy tea agriculture by taking care of the smallholders through better empowerment and better access to the supply and value chain needs to be addressed urgently.

In order to prepare the forthcoming FAO IGG Tea 23rd plenary, which is called up for May 17-20 2018, in Hangzhou, China, the first CITS workshop will convene in Jakarta, from April 2-3 2018.

Participation is confirmed to date by: Bangladesh, China, Indonesia, India, Kenya, Malawi, Sri Lanka, and Canada to represent the consumer side.

Recent achievements in Bangladesh and Indonesia , together with the well established and powerful small tea farmers set up run by Kenya’s Tea Development Agency seem to demonstrate  the considerable potential for moving forward along these lines within a strategy that needs to be defined and agreed on a global level.