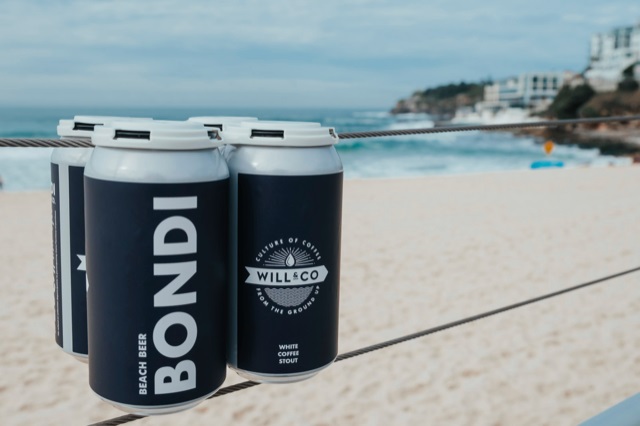 SYDNEY, Australia – Two of Bondi’s most iconic brands, Will & Co and Bondi Brewing Co. have joined forces to create a white coffee stout beer. Blurring the lines between AM and PM, these two Bondi-born brands are exciting the palates of craft beer drinkers with this collaboration that will be available at bottle shops and bars from August 2020 for a limited time.

“Paul and I live a couple of streets from each other and we’ve been talking about a collab for a while so it was great to finally team up and create something new. After a lot of trial and error I think we achieved a perfectly balanced coffee stout” said Josh Passaro, Head of Will & Co.

Locally brewed the stout is made with ale malt, oats, hops, Peruvian organic cacao nibs and Will & Co’s signature Eight-o-Eight specialty coffee blend which was chosen for its sweet floral aroma and caramel finish.

The resulting stout has creamy roasted malt notes, caramelised nuts and dark chocolate flavours with a smooth coffee finish that lingers on the palate. What makes this beer truly unique is it’s light colour in comparison to the traditional dark stout.

Paul Parks, Founder Bondi Brewing Co., said: “It was just a real fun process. As it was stout season it was a no brainer to team up, but we didn’t want to create something run of the mill. The Will & Co White Stout is a mind bender. Your brain gets ready for a Pale Ale and then, bam! A fist full of coffee in your face!”

You can get your hands on the limited edition Will & Co x Bondi Beach Beer White Coffee Stout at select BWS stores and on tap at Bondi Bowling Club, Rocker Bondi, Local Taphouse, The Chippo and more from August 2020.
ABV – 5%

Will & Co is a Bondi based specialty coffee brand which was formed by a group of lifelong coffee loving friends together with 50 years coffee experience, complimentary skills and the ambitions to create a unique culture of coffee. Will & Co work with some of the best operators around the country such as Merivale, Porch and Parlour, Pasture of Balmoral. Their headquarters and micro roastery is located in Bondi on the corner of Gould Street and Beach Road.

About The Bondi Brewing Co.:

The Bondi Brewing Co. was founded by mates Paul and Brendan in 2018, with the flagship release Beach Beer Bondi XPA which was recently rated #46 best craft beer in the country in the annual Gabs poll. The Bondi Brewing Co has continued to release and grow its range which can be found in over 200 outlets in NSW.