USDA sees world production down 4.8% to 167.5 million bags due to the lower Brazilian crop 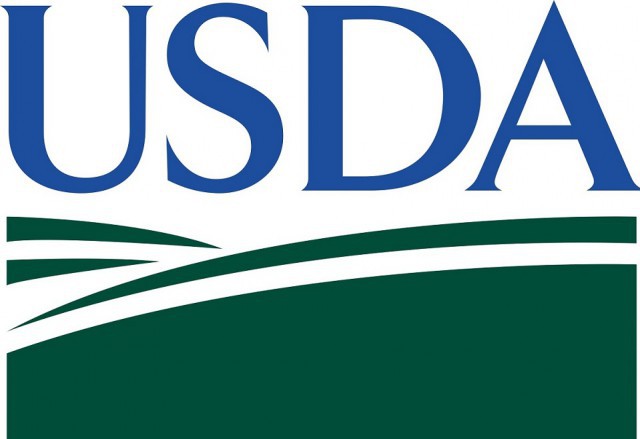 WASHINGTON, USA – The USDA ‘s “Coffee: World Markets and Trade” report forecasts world coffee production for 2021/22 down 8.5 million bags from the previous year to 167.5 million, due primarily to Brazil’s combined effect of Arabica trees entering the off‐year of the biennial production cycle and a weather‐related shortfall.

Global consumption rises 1.5 million bags to 164.9 million, with the largest gains in the European Union, the United States, and Brazil.

Brazil production is forecast by USDA down 13.6 million bags to 56.3 million compared to the previous year.

Vietnam production is forecast to rebound 2.1 million bags to 31.1 million following last year’s dry growing conditions. With Robusta accounting for over 95 percent of total output and Robusta prices trending higher over the last 12 months, many growers were motivated to boost yields by incurring irrigation costs during the normally drier period of January through March.

Farmers continue to intercrop coffee with fruits, such as avocado and durian, to boost their incomes.

Since then, yields have increased about 30 percent due largely to the renovation program that replaced older, lower‐yielding trees with rust‐resistant varieties. The program also reduced the average age of coffee trees from 15 to 7 years, further boosting yields. Bean exports are expected to rise 1.3 million bags to 12.8 million as inventories are drawn lower.

Indonesia production is forecast to slip a modest 100,000 bags to 10.6 million, with most of the loss occurring in Robusta output. Robusta production is expected at nearly 9.4 million bags on mostly favorable growing conditions in the lowland areas of Southern Sumatra and Java, where approximately 75 percent of the crop is grown. Heavy rains in northern Sumatra, where approximately 60 percent of

Arabica output is derived, are expected to have lowered yields, with output down slightly to almost 1.3 million bags. Ending stocks are expected to halve to just 800,000 bags, to sustain rising consumption and strong exports.

India production is forecast to add 300,000 bags to 5.5 million on higher Robusta output in Karnataka, the largest coffee producing state. Arabica is forecast modestly lower as it enters the off‐year of the biennial production cycle. Bean exports are forecast up 100,000 bags to 3.9 million

Total output for Central America and Mexico is forecast up 700,000 bags to 19.4 million on gains in Honduras, Guatemala, Nicaragua, and Mexico. Bean exports for the region are forecast to gain 700,000 bags to 16.4 million due to higher exportable supplies. Nearly half of the region’s exports are destined for the European Union, followed by about one‐third to the United States.

European Union imports are forecast down 1.1 million bags to 42.5 million and account for nearly 40 percent of the world’s coffee bean imports. Top suppliers include Brazil (34 percent), Vietnam (24 percent), Honduras (8 percent), and Colombia (6 percent). Ending stocks are expected to drop 2.5 million bags to 11.3 million to support a modest increase in consumption.

The United States imports the second‐largest amount of coffee beans and is forecast up 700,000 bags to 25.0 million. Top suppliers include Brazil (30 percent), Colombia (21 percent), Vietnam (11 percent), and Nicaragua (5 percent). Ending stocks are forecast to slide 200,000 bags to 5.8 million. 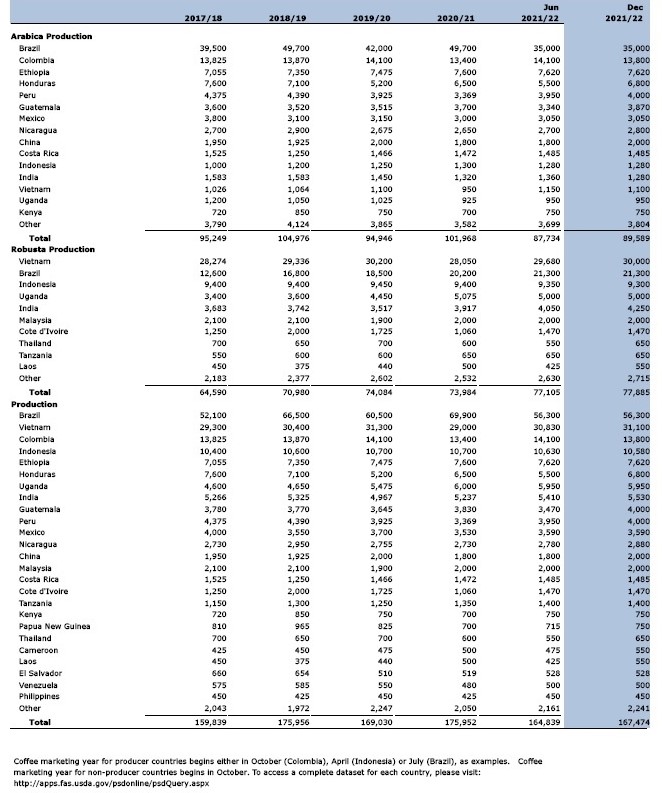 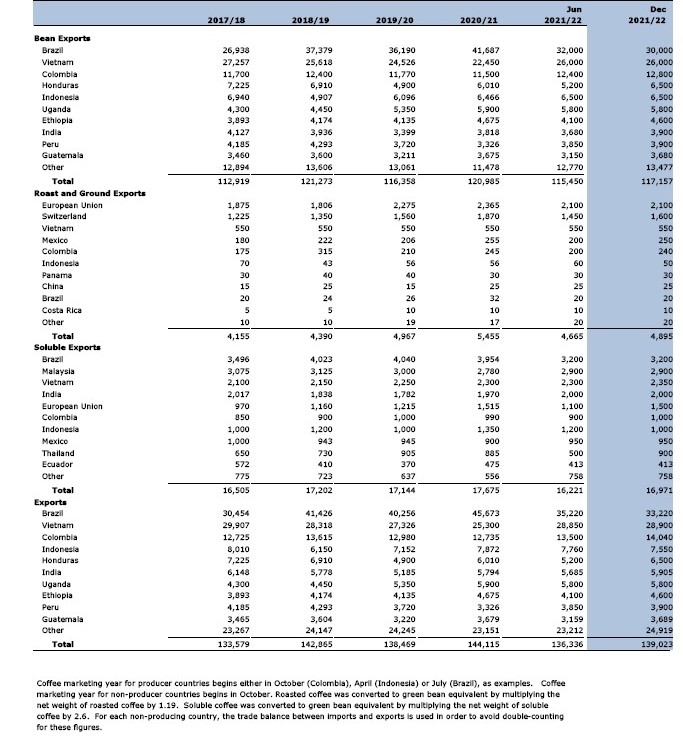 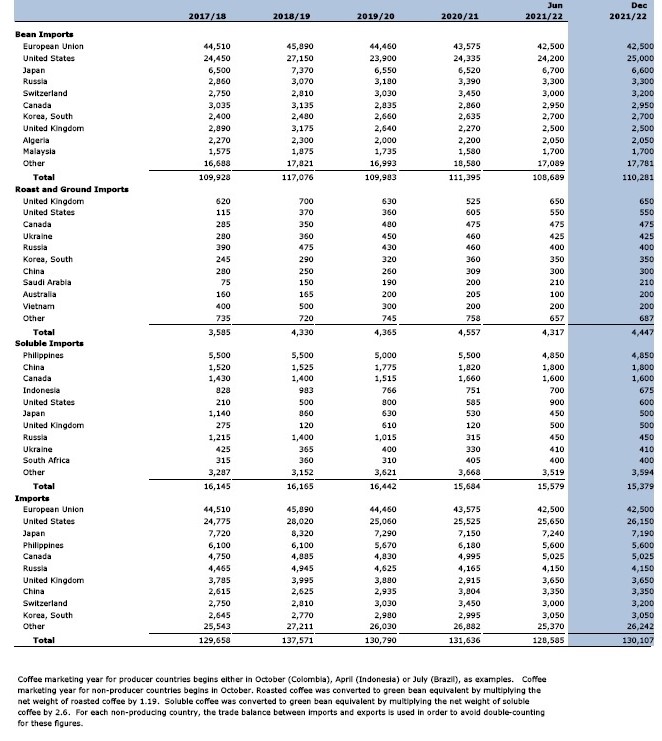 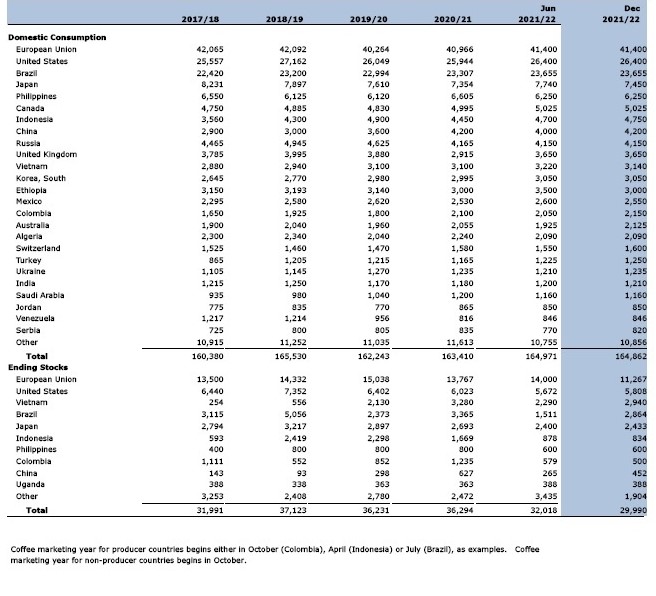