US chocolate market on track to hit $25 billion in 2019; lags behind Europe in product innovation 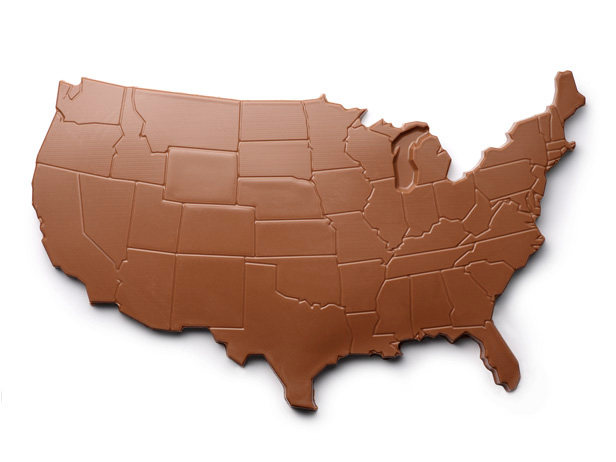 US chocolate market on track to hit $25 billion in 2019, according to a report from Mintel.

Chocolate confectionery sales grew 24% over a five year period from 2009 to 2014 to reach $21 billion in the United States, the world’s largest chocolate market.

However, the pace of growth slowed in 2014, following a pattern that has evolved over the past few measurement periods, up only 3% over 2013. The global chocolate confectionery market experienced some high points in 2014, especially in Asia.

Growth was strong in South Korea experiencing an increase of 19%, 18% in India, 16% in China, and 12% in Vietnam. While chocolate confectionery remains popular in the US with 85% of adults buying chocolate, an intensifying spotlight on health, rising costs, and competing chocolate-flavored offerings across food and drink, strains its hold. Mintel predicts steady growth through 2019, with the US chocolate market reaching $25 billion.

“The challenges facing the global market in 2014 have been related in part to supply, as the price of cocoa increased 9% in the first 10 months of the year, driven up by a number of factors including increased demand, climate change, and crop disease.

Looking toward 2015 and beyond, Asia will lead the way in market growth, while established markets such as North America and Europe will grow at lower rates. Consumers in these markets tend to prefer “favorite” products and are not willing to experiment with innovative or novel – and typically more expensive – products.”

Chocolate is a treat for Americans

More than half (53%) of US consumers eat chocolate once a week or more. Among chocolate eaters, nearly three quarters (72%) consume the confectionery as a treat. Further, 32% of chocolate buyers purchase more chocolate around the holidays, including Easter, to have on hand for personal consumption.

Similarly, one third of consumers (33%) buy more chocolate around the holidays to give as gifts. In addition to treating oneself, mood enhancement is a popular reason Americans reach for chocolate (29%). This rises to 41% when looking at Americans age 18-24. When it comes to chocolate preference, the majority of chocolate buyers (71%) are looking for options with mix-ins as oppose to plain/unflavored varieties, according to Mintel’s Chocolate Confectionery – US, 2015 report.

Europe leads the way in innovation

The global chocolate market has benefited from innovation in the last year, with new product launches growing 18% between 2013 and 2014. According to Mintel Global New Product Database (GNPD), Europe accounted for 51% of all launches, followed by Asia Pacific 21%, North America 12%, Latin America 9%, and Middle East/Africa 6%.

Chocolate confectionery innovation within the US has been focused on seasonal products. Some 42% of new product launches were classified as seasonal – largely comprised of new takes on familiar products, such as a change in shape or packaging. A look at flavor activity among chocolate confectionery launches finds that plain/unflavored varieties are seeing steep declines, while products featuring nuts and nut flavors are on the increase.

“The global chocolate market has seen considerable innovation in flavor and texture, including flavors such as beer and yogurt capturing consumer attention. In addition to enhancing the flavor of chocolate confectionery with added ingredients, there has also been newfound focus on chocolate itself, with both white and dark chocolate gaining in popularity.

New product development continues to be imaginative, with more exploration of flavors and textures outside the sweet flavor tradition. However, efforts to innovate will continue to run up against a consumer base that tends to be more conservative in product choice,” Mogelonsky said.

The price of sugar was higher in the US in 2014, with domestic growers selling sugar at prices 50-100% higher than in global markets. As a result, 71% of respondents are noticing price increases in chocolate confectionery. While the category is not considered cost prohibitive, and only 3% of consumers have stopped buying chocolate altogether due to price increases, price awareness is evident in the US market.