Sylvia Begun is the winner of The Lusso Barista Championship 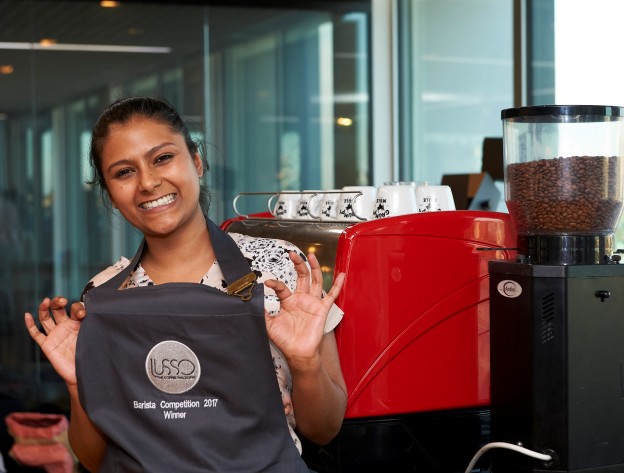 LONDON, UK – Lusso has crowned Sylvia Begun its number one barista at the Lusso Barista Championship 2017. The gifted barista showed first-class technical skills, knowledge and creativity at the final to beat tough competition and claim the title.

Among other prizes, Sylvia will enjoy an educational five-day coffee trip to Bologna, where she will learn all about coffee, from production through to service, and enjoy tasting some of Italy’s finest!

The Lusso Barista Championship, which is delivered in partnership with coffee supplier Bewleys, celebrates the UK coffee culture and upholds Lusso’s commitment to quality coffee prepared and served by talented, professional baristas, and developing the skills of its employees.

Demonstrating the consistent excellence of the Lusso coffee offer, every site was ‘mystery shopped’ in order to select the ten finalists, who then received specialist competition coaching at the Barista Academy.

At the final, competitors were challenged with producing and serving an espresso, a cappuccino and their own signature drink in a strict time frame that included preparation and clearing.  The panel of expert judges, which featured an international competition judge, were looking for technical skills, taste, knowledge of the drink and coffee blends, as well as organisation and hygiene practices.

Paul Hurren, Lusso’s managing director, said: “The Lusso Barista Championship was a brilliant event.  The talent and enthusiasm of all the competing baristas was palpable. Huge congratulations to our winner, Sylvia, but also to all the competitors who did a fantastic job.

“Coffee is a very important part of the Lusso offer and this competition demonstrates just how seriously we take it.  Every finalist delivered an exceptional standard of skill and creativity that our customers will see every day at our sites. Our customers can also expect to see Lidia’s winning signature coffee on the menu next year, as it will be our special edition Summer 2018 drink.”

The Lusso Barista Championship took place at PRS for Music, King’s Cross, and was attended by Lusso and Bewleys colleagues and Lusso clients.