Brand cafés: less about coffee or income, more about the selfie? 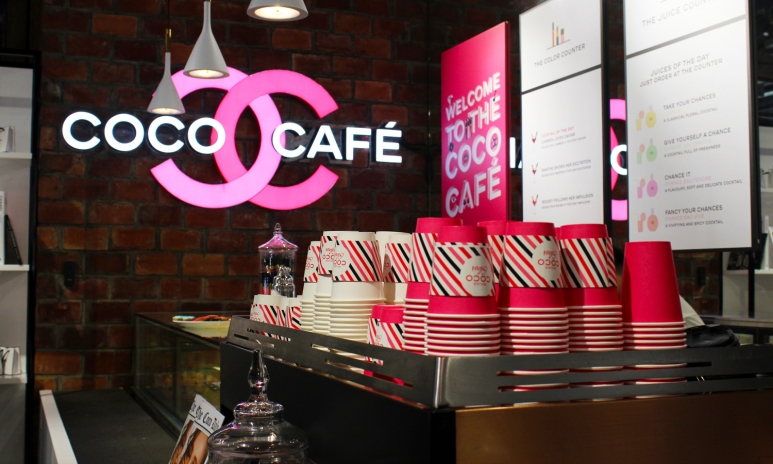 HONG KONG – In today’s consumption environment that is driven by selfies and social media, a brand café is the ultimate playground.

It has been attracting long lines that stretched down the block, with more than 30,000 posts with “#cococafe” hashtag on Instagram.

The popularity of brand cafés is not completely new but consumers’ increased revolvement of their daily activities around social media has given the concept another jolt. On top of that, there is the millennial angle.

“All brands want to catch the millennial. And millennials are very experience-driven and social-driven group.

They like to hang out in person and are more easily drawn into a shop by a concept instead of products,” said branding consultant Jacqueline Alexis Thng, partner at Prophet.

The coffee shop or café’s social function, combined with the brand’s personality would feed the younger crowd’s needs.

“I think the trend [of cafes] is more customer-driven, as customers are looking for more experiences,” said Mariana Kou, the Head of China Education and Hong Kong Consumer at CLSA.

“And the target segments of café business coincide with some brands’ original customer bases, in other words, more female-focused.”

Fashion and beauty and skincare brands have been exploring crossover businesses for years to increase the bottom line. Many have opened restaurants, hotels and other side businesses.

In Hong Kong, French fashion brand Agnès b opened its first café in 2005.

The rationale to increase a brand’s touchpoints is understandable: give customers more reasons to spend and increase earnings, and what brand marketeers would like to say – provide the brand experience.

While many brands have diversified into a variety of businesses, not every one of them has the resources to follow through, especially when they are capital and technology intensive in nature.

So cafes are often the first choice of diversification because the economics are simple and the stakes are relatively low.

When Bulgari, the luxury jeweller opened its first restaurant and café in Tokyo’s upmarket Ginza district in 2007, no one expected namesake cafés of Chanel, Gucci, Hermes, Alfred Dunhill and Furla to follow suit over the next few years.

Brand – and luxury brand – cafés seem to be of peculiar interest to consumers in Asia, according to café operators and analysts.

In mainland China, several brands such as Vivienne Westwood and innisfree have opened coffee shops in 2015 as boutique sales continue to slide in the past few years.

Veronica Wang, associate partner of management consultancy OC&C Strategy Consultants, reckoned that at a time when consumers are increasingly shopping online, cafés opened next door to the brands’ flagship boutiques could also drive foot traffic to the stores.

The New York brand, Kiehl’s opened its first café in the world in Taipei this month.

The cosmetic and skincare company said a second café would open in Beijing this November.

Vivienne Westwood café, which opened in Hong Kong in 2015, a few months after the first one in Shanghai, said the café brought in an annual revenue of US$1.3 million.

“We can’t say exactly how much traffic the café has drawn to the Vivienne boutique shop next door…But it is a win-win situation for both the Vivienne café and the boutique,” said Baldwin Ko, the managing director of the Vivienne Westwood café in Hong Kong.

The explosive food market in the Asian markets due to economic growth could also contribute to the popularity of brand cafés.

According to a survey by Unilever Food Solutions in 2014, over 85 per cent of consumers in China eat out at least once a week. The increasing personal incomes led Chinese consumers to become more comfortable with premium dining options, which fueled the country’s expenditure on foodservice by 8.1 per cent to 799 billion yuan (US$ 117 billion) in 2014.

So far, there is no quantifiable data on the impact of brand cafés or its market value.

What is visible are the social media engagements with consumers on digital platforms, but it would be hard to pin down if they led to real spending on the brand’s non-café products is hard.

The number of selfies with a cup of latte from a brand café doesn’t quite cut it, nor does a high tea session.

But brands say the selfies and posts on social media have helped.

“Instagram and Facebook have helped a lot with our business,” said Ko of Vivienne Westwood cafe. “My staff told me when the tea set arrives, most guests would spend the first 15 minutes taking pictures,” he said.

“What’s popular in Asia is actually not the ‘coffee shop’ concept, but the ‘showing-off’ culture. It’s more about taking pictures and uploading to their social media,” she said.

“It’s difficult to measure the success without financial disclosures. We can only estimate from the number of shops,” Kou said.

“In terms of shop numbers, Agnès b is very successful in Hong Kong.”

The French fashion label has opened 24 coffee shops and 23 chocolate shops in Hong Kong and Taiwan.

Peter Leong, Agnès b Asia-Pacific general manager, said in a 2013 interview with the South China Morning Post, that cafes and restaurants were the focal point of expansion going forward for the company.