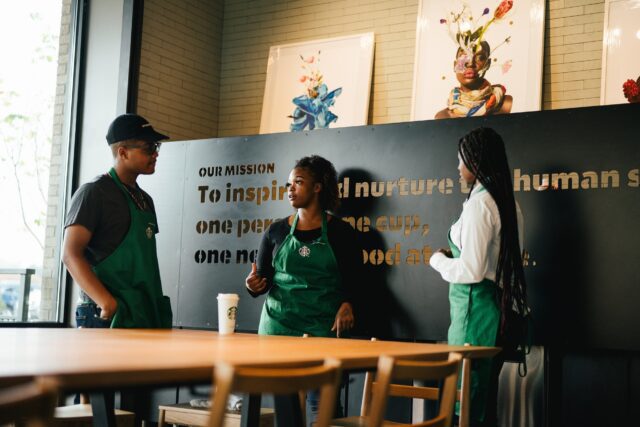 SEATTLE, U.S. – Five years following the launch of its Community Store Program initiative, Starbucks yesterday announced it will increase its commitment to open 100 Community Stores dedicated to providing economic opportunity in underserved rural and urban communities across the country, an 85 store increase from its 2015 commitment.

These stores will focus on hiring locally, creating dedicated space for communities to come together for events and working with diverse contractors for store construction and remodels. The company aspires to complete this goal by 2025.

“We believe it is our role and responsibility to partner with those in the communities we serve to help make a positive economic and social impact,” said John Kelly, executive vice president of Public Affairs at Starbucks. “These stores are successful and it’s time to expand the model. Over the last five years, we’ve seen these Community Stores empower our partners and customers to create meaningful impact that is localized and relevant to their neighborhoods. We’ve learned a great deal from our 14 Community Stores and applied those learnings to how we approach community partnership in more than 8,000 neighborhoods we serve across the country.”

The Community Stores will share several common aspects compared to other Starbucks cafes, including: locations in economically distressed communities; a designated room or space for community events and programming; a partnership with a local United Way chapter to facilitate relevant community programs; a focus on working with diverse contractors for store construction and remodels; and an emphasis on hiring locally.

As part of Starbucks national partnership with United Way, local United Ways and 211s in targeted communities will work with Community Store partners to create resources and programs for each community from life skills training for youth to mentorship programs and beyond. That includes facilitating activities at the stores that support people in the community, providing Starbucks partners with customized community profiles and resource information and connecting partners with volunteer activities that help create real change in the communities in which they live and work.

“United Way and Starbucks share a commitment to ensuring every person has the opportunity to thrive, and we’re honored to partner with them,” said Suzanne McCormick, U.S. President of United Way Worldwide. “United Way has been connecting people to resources across the U.S. for more than 130 years, and we look forward to deploying United Way’s local expertise and experience to help Starbucks Community Stores make a real difference.”

In addition to today’s news of the Community Store expansion, The Starbucks Foundation also announced it has awarded more than 1,000 Neighborhood Grants, a new giving program that creates local impact and empowers store partners to strengthen relationships with local nonprofit organizations. To date, hundreds of store managers have secured more than $1 million in grants from The Starbucks Foundation for more than 1,000 local nonprofit organizations in all 50 U.S. states and all Canadian provinces.

In addition to these local partnerships initiated by Starbucks partners every day, thousands of store partners have committed to hundreds of local service projects next week across the United States as part of the Martin Luther King Week of Good. In many communities, United Way is facilitating volunteer activities that help improve education, health and financial stability.