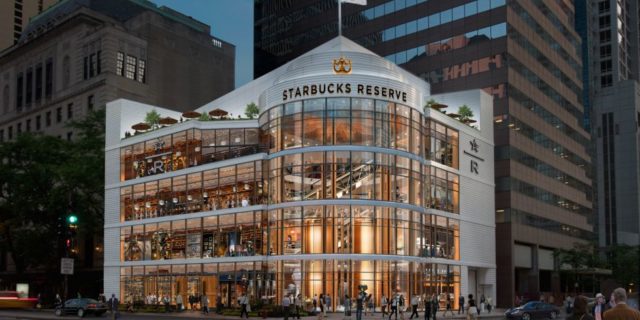 SEATTLE, U.S. – Starbucks Coffee Company has announced it will open a Starbucks Reserve Roastery in Chicago in 2019.

Located on North Michigan Avenue and Erie Street on Chicago’s Magnificent Mile, the Chicago Reserve Roastery represents the company’s third Roastery location in the U.S. following Seattle, which opened in December 2014, and New York City, which is on track to open in 2018.

The company also plans to offer customers multiple international Roastery experiences, including Shanghai, opening late 2017, alongside Milan and Tokyo, slated to open in 2018.

“Having opened our first Starbucks store in Chicago nearly 30 years ago, our first outside of Seattle, this is a very special city for me. At the time, it was a true test for Starbucks because the Chicago customer is so savvy and discerning about their coffee,” said Howard Schultz, Starbucks executive chairman.

“Chicago is a city of neighborhoods, so we took our time to find an incredible space to match the unprecedented coffee experience our premium Roastery will offer. To be located on one of the best-known retail streets in the world is a proud moment for all of us and we can’t wait to bring Chicago and the world a coffee experience worthy of their most premier real estate.”

“Chicago’s Magnificent Mile brings in millions of visitors from across this globe and is the perfect location for a world-class coffee destination,” Chicago Mayor Rahm Emanuel said.

“This Starbucks Reserve Roastery will be an investment in Chicago and a strong addition to Michigan Avenue, where residents and visitors can enjoy incredible coffees from around the world in a remarkable environment.”

Much like its flagship Seattle location, which was the most successful store opening in the company’s history, the new Chicago Roastery will be a fully sensorial coffee environment dedicated to roasting, brewing and packaging its rare, small-batch Starbucks Reserve coffees from around the world.

Tailored to the Chicago customer, the interactive four-story, 43,000-square-foot space will also be designed to bring coffee craft to life by offering multiple brewing methods, specialty Reserve beverages and mixology.

“Howard and I share the same passion for the companies we created, each centered around the customer experience and a relentless attention to detail. This building has a unique way of becoming a beacon for a brand, and I can’t think of a better retailer than Starbucks to offer Chicago something new and exciting with its Reserve Roastery,” said Gordon Segal, founder, Crate and Barrel.

As announced at the company’s December Investor Day, Starbucks will also include fresh baking on site in all Reserve Roastery locations courtesy of Italian baker Rocco Princi.

Princi food will also be available in the company’s new Reserve stores, a retail concept inspired by the Roastery but not yet open to the public.

Starbucks has announced a Reserve store coming to the West Loop in Chicago in 2018 and Seattle in 2017. During last year’s Investor Day, Starbucks confirmed that it would open 20-30 Roastery locations globally over time and up to 1,000 Reserve stores.

The premium Starbucks Reserve brand is also coming to life in Starbucks stores with the inclusion of Reserve experience bars in select locations worldwide. Currently, there are 20 Starbucks stores in the U.S. with Reserve bars – three in downtown Chicago and one in Lake Forest, Illinois.