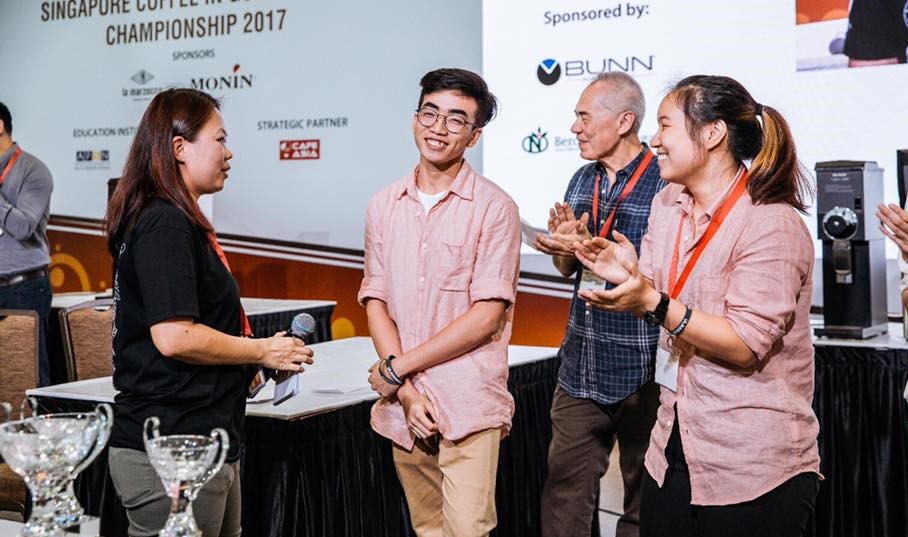 SINGAPORE — Although local cafe culture is booming — along with sales — there is not enough appreciation for Singapore’s top baristas and their craft, industry insiders say.

That is why coffee competitions such as the Singapore National Coffee Championships are important.

Organised by the Singapore Coffee Association, the event this year is part of Cafe Asia 2017 at Marina Bay Sands Expo & Convention Centre. The expo began on Thursday (March 2) and ended on Saturday.

Victor Mah, president of the Singapore Coffee Association, an organisation with a 60-year history, said the competitions help baristas to improve their presentation skills and demeanour.

In addition, they “enhance their image and standing, not only in Singapore but in the whole Asean region”.

The Championships help the public to see that a career in coffee is “a profession you can take up, an honest profession, and you can earn a very decent living out of it if you’re a good barista”, said Mah.

“Also, down the road, it gives you the (option) of being your own boss — provided the landlords don’t kill you with their rent!”

The Championships comprise several smaller competitions that test the baristas’ skills. Besides the cup tasters’ contest and latte art competition, mainstays in the yearly event, this year involves a new addition: The Singapore Coffee in Good Spirits Championship. That contest sees competitors judged on their showmanship and creativity in creating alcoholic coffee beverages.

The competitions culminate in their grand finals yesterday. Winners will get the chance to compete at the World Barista Championships, a chance for Singapore baristas to make their presence felt on the international stage, as well as to see where they stand globally.

“Our best performer has been John… He’s in the top 10 (globally). He is giving back to the coffee industry (by) mentoring up-and-coming baristas,” said Mah.

Ting, 35, also runs classes and is working with the Asean Coffee Federation on a training programme.

The barista has been competing on the local and international stage since 2007, and entered the Coffee in Good Spirits competition this year.

He thinks the introduction of the new category is indicative of what the next trend in coffee might be: “I do believe that with the inception of the Singapore Coffee in Good Spirits, we will see more cafes serving up their versions of coffee cocktails.”

Last year’s Singapore National Barista Championship winner, Regina Tay, said that each time she competes, she learns something new in terms of technique or innovation.

For instance, last year, when she represented Singapore at the World Barista Championships in Dublin, “I used ultrasound to influence the way I extract the flavours from the coffee”.

The 27-year-old, who has a day job as a coffee consultant in Jakarta, added: “In competitions, we push the boundaries on a small scale. If that works and you can project it into a real cafe setting, that’s even better.”

Also returning for another shot at the title is last year’s Singapore Cup Tasters Champion, Will Leow of Knockhouse Supply Co.

“It is always rewarding for competitors to put what they have learnt back into their daily work in a cafe or roastery,” the 25-year-old said.

One of the exciting new trends he has observed, Leow said, is what has been termed “coffee tourism” or “cafe tourism”.

“When foreign visitors come to Singapore for coffee or a cafe experience alongside a traditional tourist routine, it is always a positive thing for the industry.”

It is these global interactions, as well as the platforms that competitions provide, that push our local coffee scene to evolve.

“We have been running the competitions for the last 11 years. When we first started, we had to go around to Starbucks and Spinelli’s and ask people to come and compete,” Mah said.

“Singapore is very much the conduit in the Asean region for anything that is new and innovative. We’ve done well in that sense. And technically, we’re very good,” Mah said.

What we are lacking is “the creativity, the imagination, to move to the next level”. Hong Kong, China and Taiwan are tops in creativity, he said, adding that “our neighbours have also been progressing very rapidly”.

“In Indonesia, in Thailand, the skills are much better than what they were, especially if you’re talking about latte art… That reflects on our educational structure here,” he said.

Going forward, he said, the trends brewing on the horizon are in cold brews, alcohol coffees and nitro coffee, which is infused with nitrogen and pulled from a tap.

It all goes back to opening oneself to new influences.

“It’s important for the industry to be exposed to new ideas and grow… and it’s important that we move forward and gain recognition in the World’s competitions,” said Tay. “That is the ultimate aim.”

Here are the results of the Singapore National Coffee Championship 2017