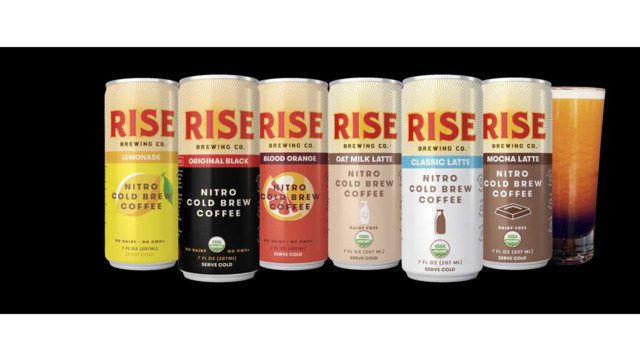 By utilizing the latest lactose alternative milk to hit the market, consumers can expect to enjoy the same signature award-winning coffee with an added rich and creamy flavor.

The line also includes a classic latte made with silky organic skim milk and cream, which will be available online and in stores on September 15. All are 150 calories or less, USDA Certified Organic, shelf-stable and consist of eight ingredients or fewer.

Since its inception, Rise Brewing Co. has been committed to creating the best tasting and cleanest coffees available by focusing on innovation and creativity in the industry. The development of this latte line was no different. The founders began by experimenting with existing dairy alternatives.

It quickly became apparent that oat milk was the perfect match for Rise and its customers. However, without an organic oat milk on the market, Rise seized the opportunity to take it to the next level by creating their own.

“There are a handful of great oat milks out there, but none that we found were made with 100 percent organic ingredients. After a search without limitation, we found a small farm in Finland that we were able to source the oats from to build the base of our Nitro Cold Brew Oat Milk Latte,” Grant Gyesky, CEO and Co-Founder of RISE Brewing Co., said.

“One of the most exciting parts of building Rise has been creating products and systems that previously did not exist. On one hand it is harder because you do not have a template to follow, but on the other hand you are not limited by your own perceptions of what is achievable. When you don’t know where the ceiling is, you have the freedom to aim higher.,” Gyesky said.