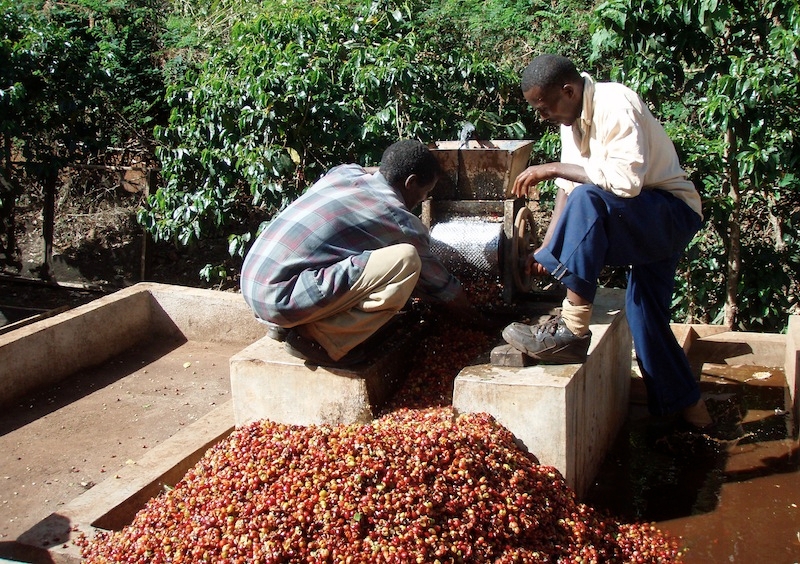 BONN, Germany – The Coffee Partnership for Tanzania (CPT) ended in 2016, after four years of rolling out projects in Tanzania’s major coffee production zones.

The experience and lessons from the CPT have been compiled into a summary report which presents the key achievements of the CPT and recommendations for future work with small-scale coffee producers.

What is the Coffee Partnership for Tanzania (CPT)?

The CPT was a four-year public-private partnership launched in 2012. The partnership was managed by DEG (Deutsche Investitions- und Entwicklungsgesellschaft mbH), initiated by the Gates Foundation and co-funded by six private sector partners.

The goal of the CPT was to increase the net income from coffee for 90,000 smallholder coffee farmers in Tanzania, largely driven through productivity and quality increases, thereby improving the livelihood of an estimated 540,000 Tanzanians living in rural areas.

Over 100,000 farmers were trained, and the use of farmer-to-farmer extension approaches and farmer field schools increased the outreach of the project and created a pool of multipliers in the villages.

Much of the training was focused on agronomy, including good harvesting practices, crop nutrition management, shade tree management, renovation and rehabilitation and more.

During the project, it became clear that showing quick results, e.g. on demo plots, is critical to encourage continued GAP adoption efforts among farmers, as well as consistency and retraining to ensure that knowledge is absorbed, retained and put into practice.

CPT’s experience shows that there is a strong case for supporting smallholder production systems. The developmental benefits generated in smallholder setups are tremendous when compared to largescale estate or agribusiness models.

Therefore, promotion of livelihoods through the support of smallholder production systems will remain an effective strategy in many countries and commodity sectors.

However, the final evaluation report shows that there is a large degree of variation in terms of the individual progress made.

For example, producers with relatively few coffee trees who substantially increased their coffee tree holdings during the CPT occasionally had difficulties in increasing productivity due to labour and/or capital constraints.

There is also a large extent of variation among farmers regarding land size, tree holdings, crop mix and age.

This raises the question as to whether a one-size-fits-all approach is most effective, or if a more nuanced model that factors in initial conditions and behavioural aspects would deliver even better results and greater impact.

The full report also reflects on the CPT’s sustainability going forward and gives an outlook for future public-private collaboration opportunities in Tanzania’s coffee sector, which can act as a guideline for future coffee sector development in Tanzania and elsewhere.

For further insights and recommendations, download the full report here.