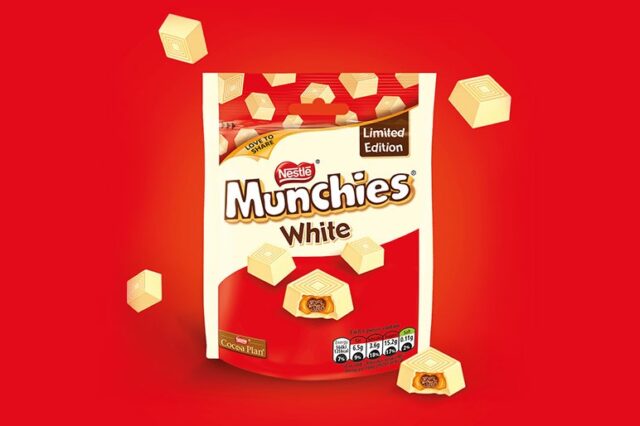 MILAN – They have been a firm fan favourite since 1957, and now there is another reason to love Munchies – they come in white chocolate too. Available in 94g sharing bags, the newest Munchies variety features a soft caramel and biscuit centre, covered in delicious white chocolate. It joins the existing range, which comprises original Munchies, Munchies Chocolate Fudge Brownie and Munchies Cookie Dough.

Nestlé is believed to have invented the first white chocolate when, in 1936, while working on a vitamin-enriched condensed milk, workers added cocoa butter to make a solid tablet form of the milk. In doing so, white chocolate was created!

Munchies Brand Manager Cat Mews said: “Munchies has been a popular brand for over 60 years, but we know that consumers love an on-trend twist to a classic too. “Fans couldn’t wait to try Munchies Chocolate Fudge Brownie and Munchies Cookie Dough when they launched last year, and we are sure that white chocolate Munchies will prove just as popular an addition to the range.”

Munchies are made at Nestlé’s Fawdon factory, near Newcastle-Upon-Tyne, which also makes many other well-loved brands, including Fruit Pastilles, Fruit Gums, Breakaway, Caramac, Matchmakers, Rolo, Toffee Crisp and Smarties Buttons.

White chocolate Munchies will be available exclusively in Asda in the UK from 13 August.

Munchies have been produced in a variety of flavours over the years, including chocolate orange, hazelnut, banoffee and mint. They contain no artificial colours, flavours or preservatives.

Ferrero to work with Ilo against child labour in hazelnut harvesting