More than 13,000 visitors attended the ninth edition of TriestEspresso Expo 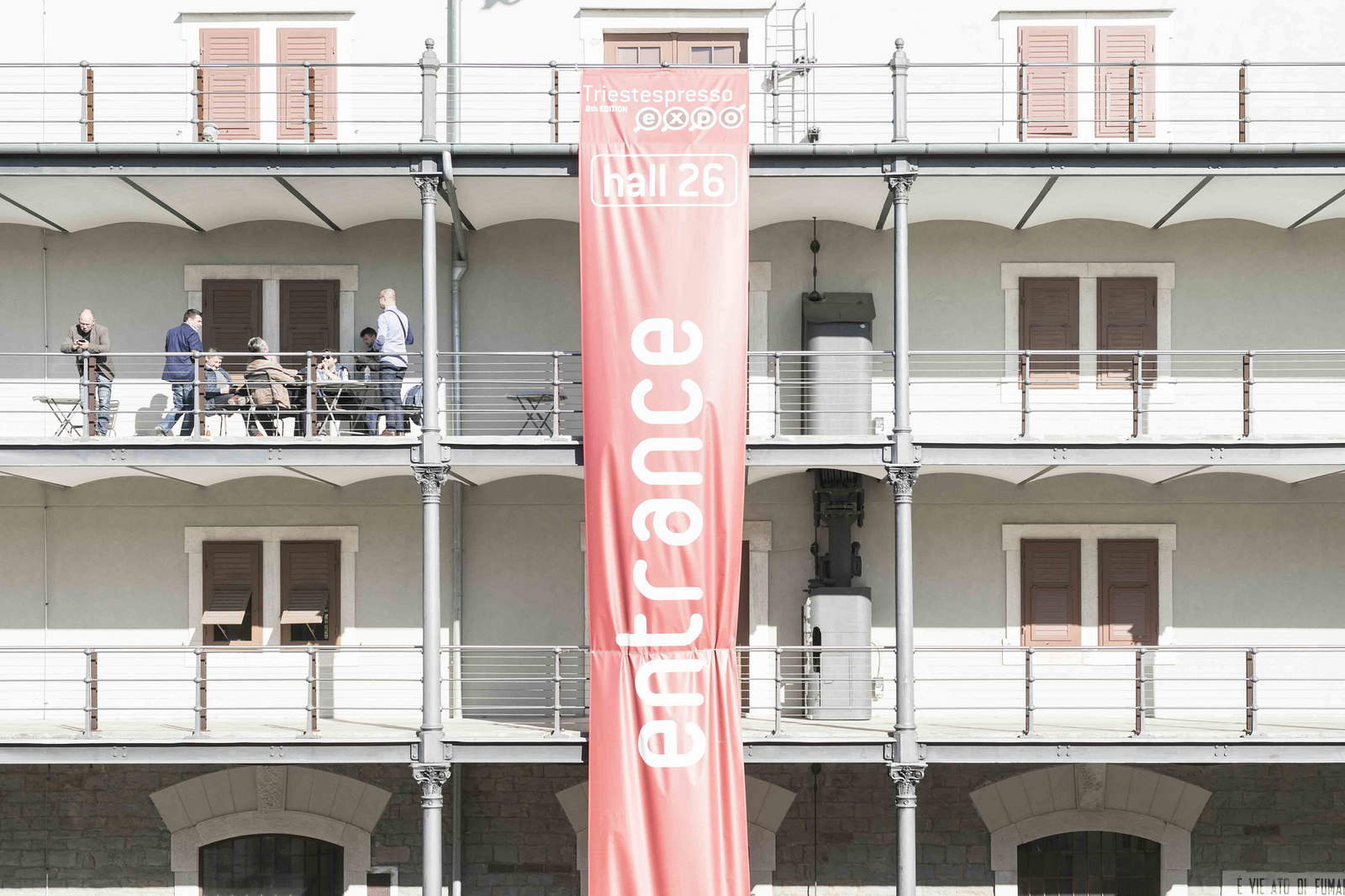 TRIESTE, Italy – The positive trend of Triestespresso Expo continues. Exhibitors and visitors coming from five continents for the three days organised in the capital of Friuli Venezia Giulia, talked about business, analysed, studied and examined the issues of the coffee sector and dealt with the changes that have occurred in the sector in recent times.

The growth objective of the most important world fair dedicated to espresso was also achieved in this edition, going from 12,500 visitors in 2016 to 13 thousand in the ninth edition, which ended today with an increase of 4%.

“This is the last edition to be held in the refurbished warehouses of the Old Port. For Triestespresso Expo 2020 we will, in fact, have at our disposal the new modern and functional Congress and Exhibition Centre,” explained the Chairman of the Chamber of Commerce, Antonio Paoletti, “on which building will start very soon in this part of the Port. The structure will be used for Esof 2020 in July 2020, a few months before the tenth edition of the international espresso fair.”

A specialised fair for a growing world market

Continuing to focus on the coffee and espresso market is essential and the Chamber of Commerce of Venezia Giulia is well aware of this. Through its in-house coffee company, Aries, it organised the specialised exhibition jointly with the Municipality of Trieste and in collaboration with the Trieste Coffee Association and FIPE. The figures speak for themselves: the world coffee market continues to grow. In the last year world production is estimated to have increased by 5.7%, reaching almost 165 million bags (to be precise 164.81), with Arabica growing by 2.2% (101.82 million bags) and Robusta by 11.7% (62.99 million bags). On the basis of the surveys constantly carried out by the International Coffee Organization, the greater supply of coffee is reflected in an increase in shipments in August 2018, given that global exports increased by 6.3% with 11.1 million bags more than in August 2017. Coffee remains one of the most important products of world trade. More than 100 million people are employed in its cultivation, processing and trade. Most of them live in areas that are 20 degrees north and south of the equator.

A very important market, however, also in Italy where 800 roasters are active for a total production value of 3.4 billion, almost half of which are exports. We are the third country in the world for the import of green coffee (behind the USA and Germany) and the second in Europe (after Germany) and the fourth in the world (after Brazil, USA, Germany) for production and consumption volumes.

The absolute protagonist of this sector in our country is the much-loved espresso. The market that revolves around its production – toasted and ground black powder, bar and domestic machines, packaging plants for bags, etc. – is estimated at around 5 billion euros. The production and sale of espresso machines, for example, is a rapidly expanding market that is at the forefront of the Italian manufacturing system. In 2016 the turnover was 445 million with an export share of 73%.

A desire for espresso that is also reflected in the online search for information, prices and opinions on the subject of coffee. The data related to capsule coffee machines, developed by the international price comparison portal for digital purchases Idealo, were particularly surprising. Interest in these products rose by 310.8% in 2017 compared to the previous 12 months, driving the entire capsule business.

Espresso, a turnover that in italy is close to 7 billion euros

Data from the FIPE Study Centre confirm that coffee always remains at the top of Italian preferences. Coffee remains, in fact, the flagship product of Italian bars, with an annual turnover of about 6.6 billion euros, equal to almost 32.5% of the total turnover of these businesses. This is one of the most relevant data of the Map of the espresso in Italy drawn up by the Study Centre of the Italian Federation of Public Businesses (FIPE) and presented to visitors to Triestespresso Expo. In fact, sipping a good coffee continues to be one of the fundamental moments of the day for Italians. The habit is widely spread throughout the territory and throughout the day. A symbol of the Italian spirit in the world and a moment of sharing and conviviality that Italians certainly do not want to give up.

If you look at the distribution of consumption at the bar during the day, in fact, 19% of Italians in the morning have only a cup of coffee for breakfast, while 49.3% in the most classic of ways drink it in the morning to start the day, perhaps with a croissant or something else, 37% treat themselves to a coffee during breaks, 9.2% at lunch and only 4.6% after dinner.

Analysing, instead, the distribution by type of bar of the cups served in a typical day, it is possible to notice how there is a substantial numerical uniformity: in fact, it goes from 170 cups served in multi-purpose bars to 220 cups served in lunch bars, passing through 200 cups consumed in non-specialised bars and 202 in morning bars; evening bars bring up the rear with 85 cups consumed.

On the employment front, the Italian bar confirms its vitality: the FIPE figures on the search for staff speak of 9,900 baristas. The sector always shows a “pink” trend, with a predominance of the female component over the male component (58% of female employees compared to 42% of male employees). 79% of employees are Italian nationals, while foreign nationals account for 21%.

Vanilla, ricotta, nutella and pistachio and with chilli and dark chocolate, these are the proposals that won the competition “Give Flavour to your Coffee” by Fipe

The ex aequo winners – Lino Alberini from Parma, Stefano Massimino from Milan and Fabrizio Goffredo from Rome – were awarded today by the Chairman of the Chamber of Commerce of Venezia Giulia Antonio Paoletti, by the Chairman of the Fipe of Trieste Bruno Vesnaver and by the Managing Director of FIP’E, Rodolfo Citterio

The winners of the competition “Give flavour to your coffee”, launched by Fipe – Italian Federation of Public Businesses and Triestespresso to stimulate the imagination of operators to look for new products in line with the new trends of consumers increasingly fascinated by the exotic flavours of the world of spices, were awarded today. Preparing a spicy coffee is the challenge taken up by many, even proposing sophisticated recipes with the use of rare ingredients such as the new “Irish coffee” perfumed with rosebuds or the long drink with citron, lime or mint combined with coffee.

The evaluations of the master of spices Marco Savona of James 1599 and the expert roasters of Mondi Caffè in Rome led to the choice of three recipes that, according to the experience of retailers, best meet the tastes of consumers. The choice was difficult and led to the selection of three ex aequo top places.

These are “Vanilla”, the new vanilla espresso coffee offered by Lino Alberini of Parma; “Etna”, a coffee based on ricotta, Nutella and pistachio with Sicilian cannoli wafer and espresso, created by Stefano Massimino of Milan; and a “Chilli and dark chocolate” coffee presented by Fabrizio Goffredo of Rome.

The winners were awarded today, Saturday 27 October, at the Hydrodynamic Power Station, the heart of the Triestespresso Expo events, by the Chairman of the Chamber of Commerce of Venezia Giulia, Antonio Paoletti, and the Managing Director of the National FIPE, Rodolfo Citterio.

In addition to the tasting of the Sicilian Ammu espresso cannoli, many tastings were held during the event and other coffee recipes were tried out, offered by Mondi Caffè and Cosmai Caffè.