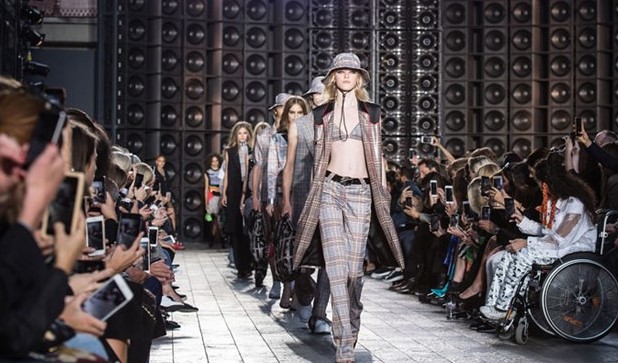 LONDON, UK – London Fashion Week offered up its creative vision for Autumn/Winter 2018 ready-to-wear. This year’s edition was also marked by the presence of Her majesty the Queen, who made a surprise appearance at Richard Quinn’s show.

Now that the event is over, it is time to recap some of the key figures relating to one of the hottest events in the industry.

20,000: The number of espressos served onsite (equating to 200kg of Lavazza coffee) to keep the fashion editors caffeinated for catching the shows. Nourishment were be provided in the form of 15,000 Bounce Balls, a gluten-free, high energy snack.

10,000: The number of bottles of Sassy cider that werebe distributed on site for those looking for something a little stronger than coffee. Some 5,000 portions of Scavi & Ray Prosecco will also be served up to guests.

29: The number of inflatable ‘Chubby Hearts‘ that accessories designer Anya Hindmarch has installed at famous landmarks across the city to spread the love ahead of the new season.

3.5: The percentage at which the menswear clothing market is growing, according to Mintel 2017 statistics. While the menswear sector only accounts for 26% of the total clothing market, it is growing at a faster rate than womenswear. The trend is also backed by the growing number of co-ed shows taking place during the womenswear fashion weeks of New York, London, Paris and Milan, with J.W. Anderson the latest big name designer to adopt the model in the UK capital this season.

Indian millennials relate to coffee as a companion, says a survey by L...