GRAND DUCHY OF LUXEMBOURG –  The Board of Directors of Ivs Group S.A. (Milan: IVS.MI), convened on November 14th, 2022 and chaired by Mr. Paolo Covre, examined and approved the Interim Report at 30 September 2022, that include, since the beginning of the third quarter 2022, Liomatic and GeSA groups, consolidated into Ivs Group with effect July 1st, 2022.

Following the Business Combination with Liomatic and GeSA, whose effects started on July 1st, 2022 and therefore are included since the third quarter 2022, the group’s activities were divided into four macro-businesses, that at 30 September 2022 generated the sales indicated below (before intra companies elision).

2) Resale business (Euro 29.3 million), including the businesses owned by Liomatic and Vendomat SpA. This business was not present in Ivs Group before the Business Combination and therefore the comparison between 2022 and 2021 is not significant. Through the acquired businesses, the group is now the Italian market leader also in this important market segment.

The horeca and coin division business

3) horeca business (Euro 5.1 million). This is also a new business segment for IVS Group, and it is mostly represented by activities owned by Liomatic (in Spain), whilst IVS growth project in this business in Italy is currently starting.

4) Coin division business (Euro 20.5 million; +15.2%), with no contributions from the Business Combination with Liomatic and GeSA. The sales increase comes from +14.8% in metal coins business and +54.8% in payment services (Moneynet). The payment app CoffeecApp continues its strong growth (over 1 million registered users and 243,000 active users).

The contribution in the third quarter from Liomatic and GeSA vending businesses was around 65 million vends, whilst the volumes growth attributable to former IVS Group perimeter was equal to 7.3% (from 474.4 to 510.2 million vends). The overall acquisition rate of new clients remains higher than the churn rate.

The other acquisitions of the period (other than those included in the Business Combination), contributed pro-rata to sales for around Euro 1.7 million.

Average price per vend in the quarter (net of VAT) was equal to Euro 50.5 cents, from 47.6 cents (+6,1%) of the same period of 2021 (before the Business Combination). The actual price increase in percentage was higher, but the new average is diluted by the lower selling prices of Liomatic and GeSA.

Increase in average selling reflects both the ongoing policy of price adjustments and the gradual recovery of volumes in pubic and travel market segments, where prices are usually higher than in the corporate segment.

The selling price increase policy will continue to deploy its effects for quite a long time on the total client’s base, while the increases of the cost of goods sold, and even more of fuel and energy were full and rapid. The ongoing process of increasing prices will allow an overall positive effect higher than that of inflation on costs.

Adjusted Ebitda is equal to Euro 62.5 million, +16.4% from Euro 53.7 million at September 2021. With the entry in the group of the resale and horeca businesses and considering the present lower margins of the newly acquired companies (compared to IVS historic levels), overall Adjusted Ebitda margin was of 17.4%.

In particular, the higher incidence of the cost of goods sold is due to the weight on total sales of the resale business, whose Ebitda margin is currently in the range of 5%. In the vending business Ebitda margin was 18.6% (21.1% if calculated net of positioning fees). Adjusted Ebitda is influenced by a negative contribution from Moneynet (Euro -0.75 million) that, however improved (by around 31% vs. September 2021), since the 3rd Q 2021 is not considered any more as a non-recurring start-up cost. Moneynet reported Ebitda at September 2022 was instead positive (Euro 0.1 million), thanks to non-recurring proceeds.

The margin of metal coins management increased significantly (Adjusted Ebitda +22.8%). Ebitda increase at 30 September 2022 was affected by the sharp increase of fuel and energy costs, for a total of Euro 3.8 million vs. September 2021 (without considering the newly controlled companies); moreover, within the labour costs, technical intervention increased a little bit more than volumes increase, because of higher use of the personnel devoted to set the prices increase on the vending machines.

In the third quarter 2022, the businesses coming from the Business Combination with Liomatic and GeSA generated total sales for around Euro 63 million and Euro 5.9 million Ebitda.

Consolidated Adjusted Ebit increased by 87.6% to Euro 16.3 million, from Euro 8.7 million at September 2021, thanks to the Ebitda growth and the lower incidence of depreciation charges, that gradually reflect the stronger selection of Capex started in 2020.
Consolidated Net Profit at 30 September 2022 is equal to Euro 5.9 million (before Euro 0.4 million profits attributable to minorities) compared to Euro 5.2 million at 30 September 2021 (that included Euro 9.0 million of tax proceeds).

The Net Adjusted Profit (before minorities and net of the exceptional items) is equal to Euro 6.6 million (Euro 6.7 million at 30 September 2021, that included Euro 8.8 million of tax proceeds, of which 5.4 million related to tax revaluation on goodwill and clients’ list).

Net Financial Position (“NFP”) is equal to Euro -409.8 million (including Euro 68.0 million related to IFRS 16 effects on rents and leases), comparable to Euro 322.2 at 30 June 2022 before the closing of the Business Combination and excluding the proceeds of the rights issue completed on June 2022.

NFP at 30 September 2022 include therefore: (i) the prices paid for the acquisitions and the related due-diligence costs (for a total of around Euro 209.6 million;) (ii) the Net Financial Debt of the companies acquired and consolidated with the Business Combination (Euro 61.7 million); the proceeds, net of expenses, of the rights issue (Euro 184.2 million). During the first nine months of 2022 were also made other payments related net investment in fixed assets for Euro 28.8 million and Euro 10 million dividend (paid on September 21st, 2022).

The integration with Liomatic and GeSA

As of 30 September 2022, the group increased its significant VAT credits, to around Euro 10.7 million, not included in the NFP.

Other significant transactions and events occurred after 30 September 2022 and forecast
The present with high levels of inflation affect IVS Group operations, but certainly with lower intensity compared to the past pandemic impacts. t

Volumes are still in a gradual recovery trend, although slow, still influenced by the uncertainty related to real presences and hours worked in the locations where vending machines are placed.

The integration with Liomatic and GeSA was well started and is already generating the first positive effects expected from the Business Combination, strengthening the group market position and performances. On the base of present vending volumes, it can be expected, on a full 12-month period, a number of vends exceeding 900 million. 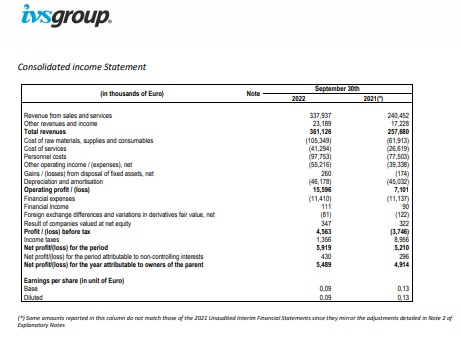 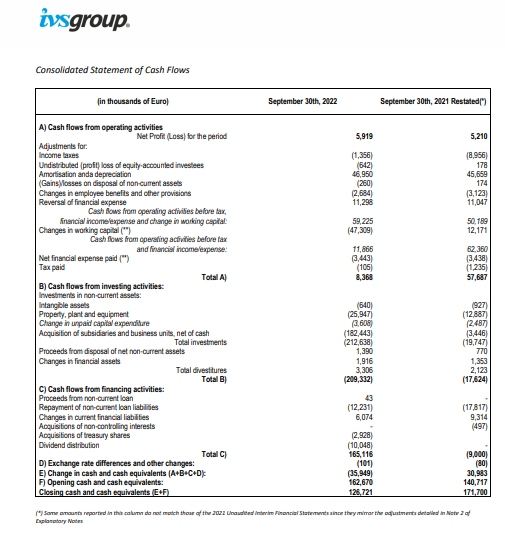