Here is how Indonesia is promoting its specialty coffees in Germany 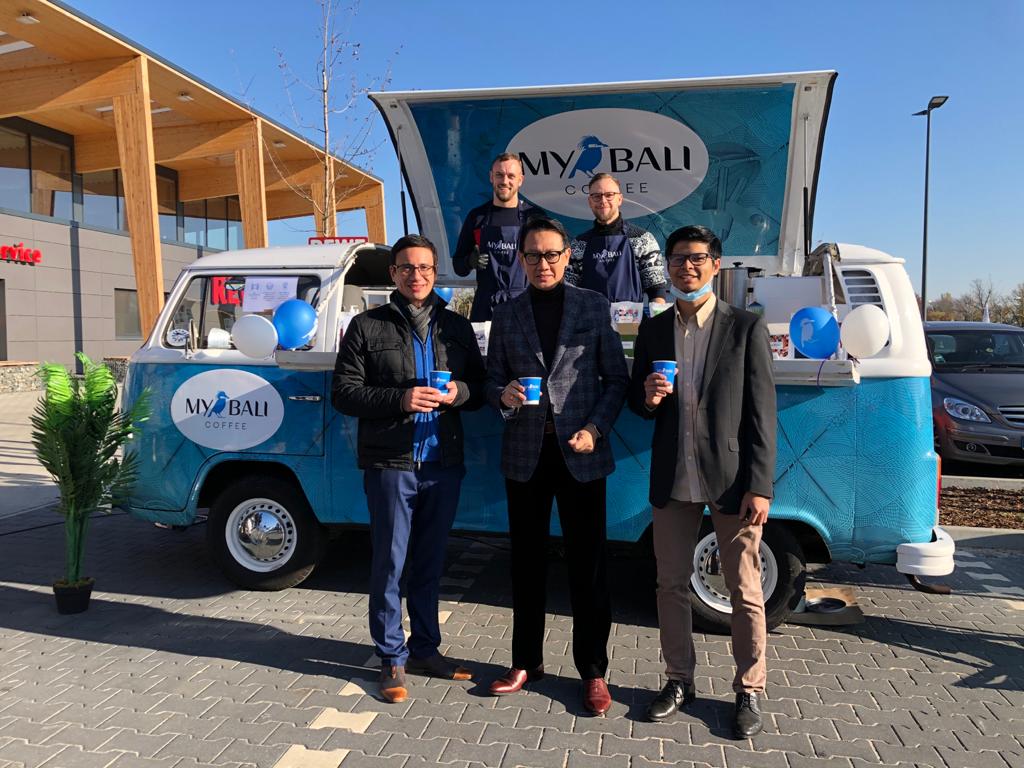 BERLIN, Germany – One of the many similarities between Indonesians and Germans is that both love coffee. However, the Germans drink 5.2 kg of coffee per person per year, while Indonesians only 1.13 kg. It is not surprising that Germany is the largest importer of coffee beans in the world after the United States.

Do Germans like Indonesian coffee? Of the total coffee imports in Germany, Brazil ranks first, followed by Vietnam. Indonesia sits on the 9th position with its Arabica coffee, such as Gayo, Lintong, Mandailing, Preanger, Bajawa, and Bali, which are part of specialty coffee. On the other hand, the Brazilian and, especially, Vietnamese coffee that enter the German market are of the Robusta type, which is cheaper than Arabica.

However, the low penetration of Indonesian coffee in the German market is not only due to the expensive specialty type of coffee being exported, but also lack of promotion.

First, the Indonesian Ambassador in Berlin and the Embassy staff members took a coffee knowledge course, became baristas at the largest coffee roastery in Berlin,
and attained certification as baristas from the SCAE (Specialty Coffee Association Europe). Selling coffee with a deep understanding of it will provide more value.

Fourth, the Embassy has initiated coffee promotion through Jazz Radio in Germany as well, where the radio DJs are be served Indonesian coffee, followed by interviews about Indonesian coffee.

Fifth, there has been coffee promotion in collaboration with a German coffee roastery that has its own market share in Germany.

Sixth, a coffee promotion will be held at Hannover Messe 2021, the largest industrial and automation exhibition in the world, which was attended by 200,000 people in one week.

Seventh, coffee promotion has also been made in the German cruise ship industry. This promotion requires its own approach and strategy

The Indonesian Ambassador to Germany, Arif Havas Oegroseno, during the promotion event at the REWE Supermarkets on Saturday, November 7, 2021, stated that “the seven strategies are probably the first to be carried out by Indonesian representatives abroad. It was done to directly link the coffee habit of the German people with the availability of Indonesian coffee in German supermarkets. Educating the German public by having direct marketing at supermarkets in a unique way can not only introduce Indonesian coffee to the public but also change the coffee preference in Germany.“

Not even this pandemic could disrupt the marketing of coffee in Germany.
The Deutscher Kaffeeverband survey data concluded that 72% of Germans consume coffee at home, 21.8% enjoy coffee while working or at a cafe, and the remaining 5.7% enjoy it with relatives and friends. This is why the coffee trade in Germany was less affected by social restrictions during the pandemic.

Furthermore, according to the owner of the MyBali Coffee brand, Sascha Bayu Handojo, online sales of Indonesian coffee have increased during this pandemic. Sascha, who has Indonesian-German blood, is targeting 1,000 new coffee outlets by 2021 to increase Indonesian coffee recognition among German consumers.