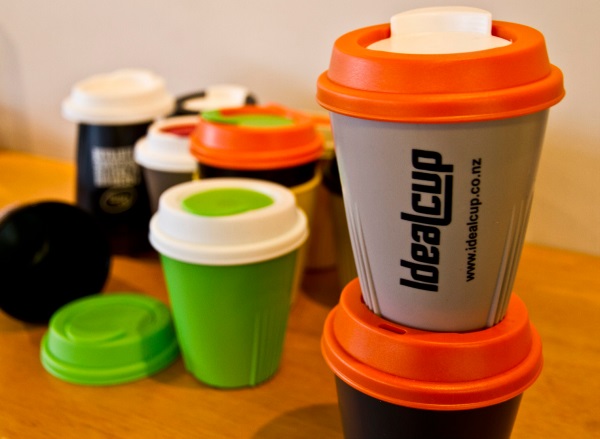 MOTUEKA, New Zealand – Steph Fry is starting a revolution against “revolting” disposable coffee cups. The Motueka businesswoman is determined to make the town, west of Nelson, the first in New Zealand to be dump disposable cups and replace them with reusable and 100 per cent recyclable containers.

Steph and her husband James Fry started a coffee roastery, Celcius Coffee, in Wellington 14 years ago. From the get-go, Fry said sustainability was part of their ethos.

“Being in this industry we felt that we had an obligation to try and minimise waste as much as possible. One of the biggest, most revolting elements of the coffee industry is the disposable takeaway cups.”

The couple moved to Motueka where James grew up, several years ago. Since the move, they had set up a cafe and coffee roastery in the region.

Fry said seeing the amount of waste in the small town was “just frightening”.

“We live in paradise, we live in the gateway to the Abel Tasman, we live in one of the most beautiful countries in the world and it absolutely devastates me to see the waste that goes through this town itself.”

Data from the Packaging Forum shows there are 295 million takeaway cups sold each year in New Zealand.

Many of those end up in landfill as they are unable to be recycled due to their plastic lining. Compostable cups also needed to be sent to a commercial composting facility and the cost and complexity of the process meant they were often put in the bin.

Six years ago, the Frys began making a 100 per cent recyclable and reusable cup, the IdealCup.

The New Zealand made product has since won several major environmental awards.

Fry said they sold hundreds of thousands of cups in New Zealand and overseas each year and wanted to use their experience to make a difference in the community.

She acknowledged it was a “huge undertaking”.

“We may not achieve it in totality but what we are going to do is try and make it happen.”

The couple have the support of local community group, Our Town Motueka.

She had counted 32 coffee outlets in the wider Motueka area and Fry said they would support each one in their effort to ditch the disposables.

Providing cafes with reusable cups was one way to reduce the need for takeaway ones.

“What we need to do is make sure that all the cafes and anyone that serves in disposable cups has the tools to be able to support that.”

Fry said the aim was to sponsor each coffee outlet, depending on their size, to have 50 or 100 reusable cups so they could buy in to the process. They would also put a toolkit for each business to help them educate consumers.

Fry said that is where the concept of “cupcycling” came in.

“It is essentially having a stack of cups on the coffee machine, a customer can come in and pay a $10 bond which basically gives them the use of the cup and we give them their first drink in it.”

She said customers could then bring their dirty cup back in and take away a clean one. It would suit those who didn’t want the responsibility of owning a cup.

“It is not the full, sustainable option but it is a step in the right direction.

“It also means that the cafe can encourage that reuse and can reduce their costs because they are not having as many takeaway cups.”

She had been discussing with the organisers the idea of ensuring the upcoming Motueka Kai Fest was disposable cup-free.

If the campaign was a success, it was something that could be applied in other regions.

Fry said it was still early days and they were working on how it would be rolled out.

“We are passionate about this, we want to do this, we are going to make it happen.”

Single-use cups were a priority waste stream to eliminate.

“The number of cups people use is staggering.

“We need to desperately move towards zero waste.”

“It didn’t take us very long to become completely reliant on single-use disposables, what we need to do is change the behaviour back again.”

She said the initiative was “perfectly do-able”.

Roach lived on Waiheke Island where the community decided to stop using plastic bags in its Countdown supermarket last year.

“Basically within three months most people had got the hang of it, taking their own bags.”

She said it was a great thing to attempt and hadn’t heard about it happening anywhere else in the country.

“If Motueka can do it, we can roll it out in other towns and centres.”