LONDON, UK – The average of the ICO composite indicator in August rose by 10.7% to 114.78 US cents/lb. All group indicator prices rose in August 2020 for the second consecutive month with the largest increase occurring for Brazilian Naturals. In July 2020, world coffee exports fell by 11% to 10.61 million bags compared to July 2019, and Other Milds recorded the largest decrease.

The ICO daily composite indicator continued the upward trend at the end of July starting the month at 113.62 US cents/lb before reaching a low of 109.90 US cents/lb on 11 August. However, prices recovered over the rest of the month and reached a high of 121.31 US cents/lb on 31 August. Concerns over temporary tightness in supply, as evidenced by the lower output and exports in some countries, particularly producers of Mild Arabica, supported firm prices in August.

Prices for all group indicators rose in August 2020 for the second consecutive month. The largest increase occurred in the average price for Brazilian Naturals, which grew by 14.1% to 111.79 US cents/lb. Other Milds increased by 11.2% to 163.25 US cents/lb while Colombian Milds rose by 9% to 167.22 US cents/lb. As a result, the differential between Colombia Milds and Other Milds decreased by 39.8% to an average of 3.97 US cents/lb. The monthly average Robusta price increased by 7.4% to 72.68 US cents/lb.

The average arbitrage in August, as measured on the New York and London futures markets, rose by 20.3% to 58.09 US cents/lb. Certified stocks have also fallen in recent months. In August 2020, stocks of certified Arabica reached 1.54 million bags, the lowest volume since March 2017, and certified Robusta stocks amounted to 1.85 million bags, the lowest since November 2018.

Production in the next two largest producers of the region, India and Papua New Guinea, is expected to decrease by 2.5% to 5.85 million bags and by 19.2% to 752,000 bags, respectively. Regional exports in the first ten months of the coffee year reached 34.1 million bags, 4.2% lower than in the same period for 2018/19 due to strong competition on the international market.

Production is expected to rise in Africa’s two largest producers, Ethiopia and Uganda. Ethiopia’s harvest is estimated to increase by 2.1% to 7.7 million bags due to beneficial weather and improved agricultural extension services. Output from Uganda is estimated at 4.9 million bags, 4.2% higher than last year, which is the second year of increase.

Production is projected to decrease in four of the five largest producers in Central America & Mexico. Honduras’ harvest is estimated to fall by 7.2% to 6.8 million bags, which is the second year of decline. Low prices and a limited labour supply have discouraged farmers from harvesting their coffee.

A surge in demand at the start of the global pandemic and increased at-home consumption helped to limit the fall in demand, but the latter half of the coffee year faces ongoing pressure from a global economic downturn and limited recovery in out-of-home consumption. As a result, the overall supply/demand balance is estimated by the ICO as a surplus of 952,000 bags. 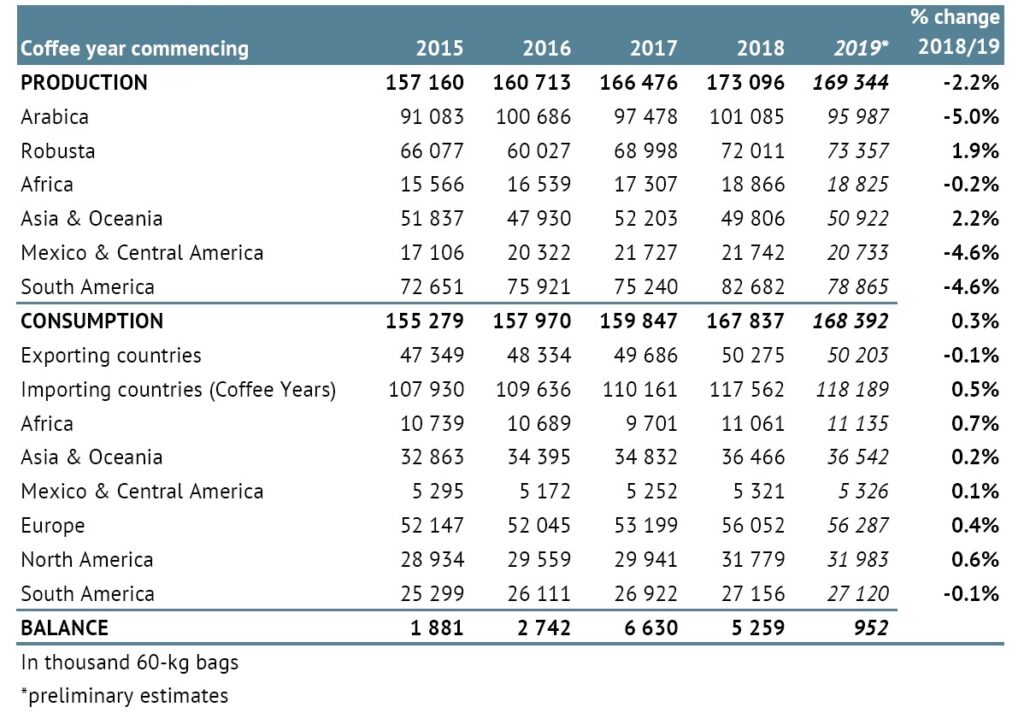