ABIDJAN, Côte d’Ivoire — This review of the cocoa market situation reports on the prices of the nearby futures contracts listed on ICE U.S. (New York) and ICE Europe (London) during the month of October 2018.

It aims to highlight key insights on expected market developments and the effect of the exchange rates on cocoa prices.

Chart I shows the development of the futures prices on the London and New York markets at the London closing time. Both prices are expressed in US dollars.

Any departure from this price configuration provides indication on the relative, expected availability of cocoa beans at the delivery points, designated by the exchange, at contract
expiration.

Chart II depicts the change in the ICCO daily price Index and the US dollar Index in October. 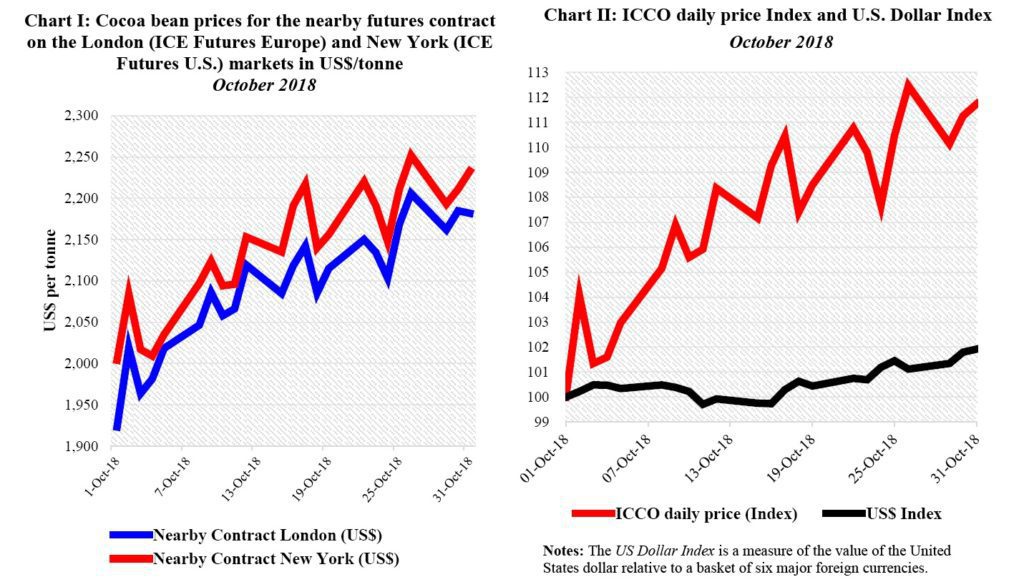 As shown in Chart I, during October, the December 2018 contract prices bounced back from their dip observed at the end of September 2018.

Indeed, the soaring prices seen on both the London and New York markets were a result of an increasing demand mirrored in grindings data released by regional cocoa associations.

In addition, abnormally heavy rains that occurred during the month under review, raised fears of cocoa-related diseases spreading throughout the main cocoa producing regions of Côte d’Ivoire.

This news contributed to strengthening cocoa prices. Thus, compared to the value displayed at the beginning of the month, the nearby contract prices firmed by 13% and settled at US$2,182 /tonne in London by the end of the month.

At the same time, prices increased by 11% and stood at US$2,233 /tonne in New York during the last trading session of October.

During the first two trading weeks of the month being reviewed, news indicated that market participants anticipated quality concerns and potential delays in the delivery of the West Africa main crop following abundant rainfall recorded in the region.

Subsequently, the December 2018 contract traded on a strong note and averaged
US$2,033 /tonne in London and US$2,077 /tonne in New York during that period.

From 15 October onwards, the regional cocoa associations published their grindings data which showed robust demand in all world regions.

As a consequence, prices continued their rally during the last two weeks of the month under review. With regards to their value reached by mid-October, prices gained 5% by the end of the month, on both London and New York markets.

Moreover, reports from the Intercontinental Exchange (ICE) indicated that cocoa beans stocks held in certified warehouses declined in both Europe and the United States during October.

Indeed, compared to their values displayed at the start of the month, cocoa bean stocks declined by 1%, moving from 102,070 tonnes to 100,710 tonnes in Europe.

As a consequence, the front-month priced higher in New York compared to London during the entire period under review.

The appreciation in the nearby contract prices is fully supported by market fundamentals.

As illustrated in Chart III, the chocolate confectionery market has been increasing in size in all regions worldwide in 2018 compared to 2017. 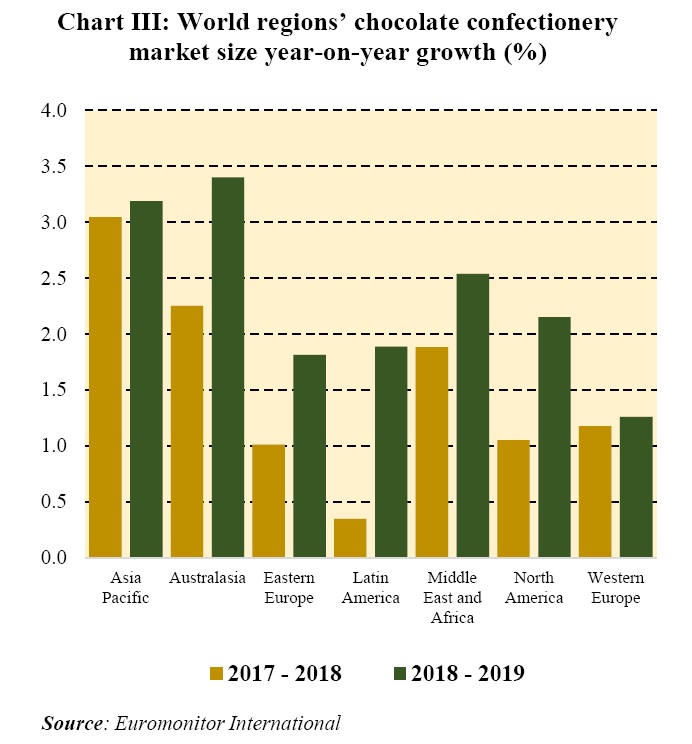 Also, in terms of projections for 2019, the market size is expected to rise compared to the level reached in 2018.

In 2018, the Asia Pacific region recorded the highest growth in regional market size (3%) followed by Australasia (2.3%) and the Middle East and Africa (1.9%).

Furthermore, an upward trend is expected for the year-on-year market size growth in 2019. Indeed, all world regions are expected to increase their chocolate confectionery market size during this period.

Compared to the 2018 market, Australasia, Asia and Pacific as well as the Middle East and Africa are expected to record higher market size growth for chocolate confectionery by the end of 2019.

Compared to the same period last year, grindings data released by regional cocoa associations showed an increase in demand in Africa, Europe, Asia and North America. Data published by the Ivorian exporters’ association (GEPEX) showed that Côte d’Ivoire’s grindings had reached 505,000 tonnes since the start of the 2017/18 crop season, nearly unchanged from 503,000 tonnes grinded over the same period of the previous year.

In addition, the Cocoa Association of Asia published an increase of 3.7% to 196,418 tonnes while, the National Confectioners’ Association published a 2.53% expansion to 128,494 tonnes for North America.