ABIDJAN, Côte d’Ivoire – This review of the cocoa market situation focuses on the prices of the nearby futures contracts listed on ICE Futures Europe (London) and ICE Futures U.S. (New York) during the month of December 2019. It aims to highlight key insights on expected market developments and the effect of the exchange rates on the US-denominated prices.

The front month cocoa futures contract prices weakened on both London and New York markets during the month of December 2019 (Chart I). In comparison to their levels reached during the first trading session of the month, prices fell at the end of December by 6% from US$2,566 to US$2,407 per tonne and by 2% from US$2,590 to US$2,538 per tonne in London and New York respectively.

This downwards trend was attributed to the favourable growing conditions that prevailed in West Africa ’s cocoa belt and ample supplies of cocoa beans recorded in Côte d’Ivoire and Ghana at the time.

Although prices mainly declined their developments exhibited three distinct phases. During the first trading week of the month (02-06 December), the fear of a tight supply fuelled both a bullish market stance and a backwardation in the futures markets.

At the end of 2019, the annual average price of the front month contract in London had increased by 9% compared to the previous calendar year as seen in Table 1. During the same period in New York, the average of the nearby contract prices strengthened by 4% year on year.

The annual average US denominated ICCO daily price was US$2,341 per tonne, up by 2% compared to level reached the previous year. The average of the Euro denominated price expanded by 8%, attaining US$2,092 per tonne over the same period.

As shown in Chart II the development in the US foreign exchange had a marginal impact on cocoa prices.

Chart III show s that, during 2019 prices for cocoa butter and powder in Europe and the United States generally followed an upward trend on both of the world’s largest cocoa consuming markets. Indeed, prices for cocoa butter improved by 4% from US$ 6,164 to US$ 6,403 per tonne in the United States, whilst in Europe they rose by 5% moving from US$5,885 to US$ 6,157 per tonne. 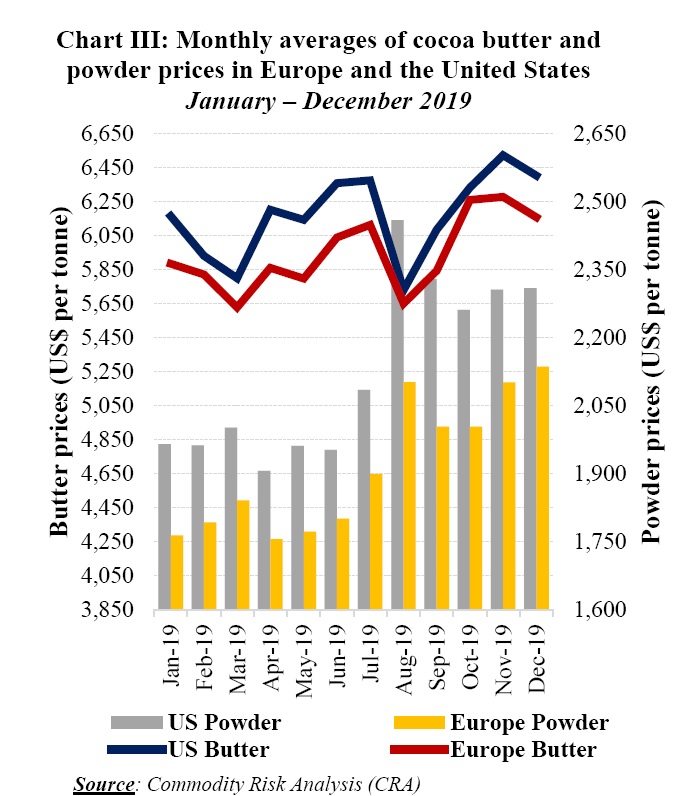 In addition, compared to their average values recorded in January 2019 the front month cocoa futures contract prices progressed by 13% and 11% in London and New York respectively at the end of December 2019. They spiked considerably from US$2,153 to US$2,434 in London, while in New York they soared from US$2,303 to US$2,549 per tonne.

At the end of the first quarter of the 2019/20 crop year, higher arrivals were established in Côte d’Ivoire, while in Ghana they were stagnating compared to the volumes reached a year ago Indeed, as at 19 January 2020 cumulative arrivals of cocoa beans at Ivorian ports were reported at 1. 296 million tonnes, up by 1.2 from 1.281 million tonnes attained during the same period during the 2018/19 season In Ghana, arrivals of graded and sealed cocoa were seen at 456,000 tonnes by 19 Dec ember 2019.