ABIDJAN, Côte d’Ivoire – This review of the cocoa market situation reports on the prices of the nearby futures contracts listed on ICE Futures Europe (London) and ICE Futures U.S. (New York) during the month of October 2019. It aims to highlight key insights on expected market developments and the effect of the exchange rates on the US-denominated prices.

Chart I shows the development of the nearby futures prices on the London and New York markets at the London closing time. Both prices are expressed in US dollars. Chart II dep icts the change in the US denominated ICCO daily price index and the US dollar index in October.

Chart III present s monthly average cocoa butter and powder prices in Europe and the United States since the start of 2019. 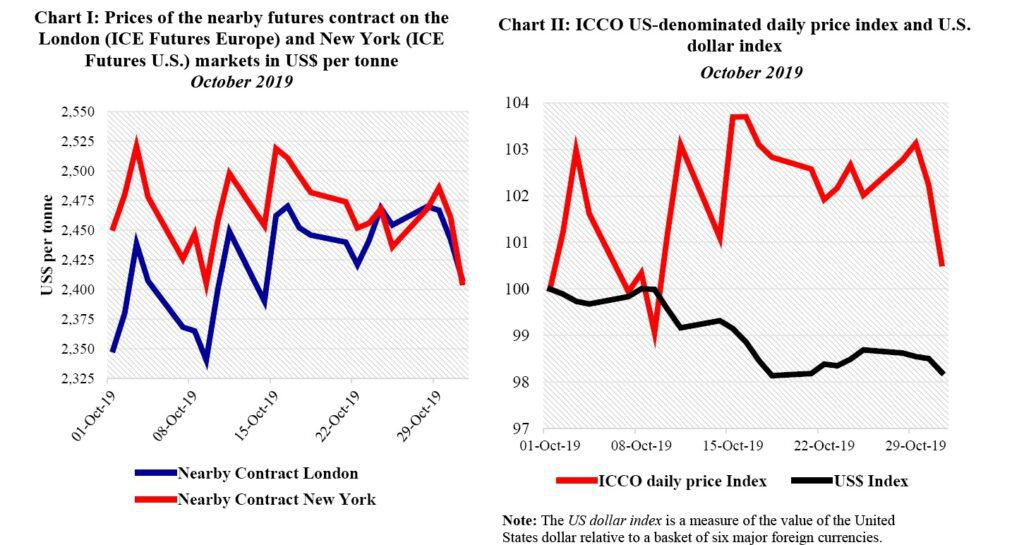 The dynamics of the nearby cocoa futures contract prices highlighted four major stages on both the London and New York markets in October Following the joint declaration issued by Côte d’Ivoire and Ghana to limit production at the beginning of the month, prices moved upwards by 4 from US$2, 349 to US$ 2 439 per tonne and by 3 from US$2, 452 to US$2, 521 per tonne in London and New York res pectively.

This increase was short lived. Prices retreated from their high as a result of a year on year increase of 21% in cocoa arrival s at Ivorian ports and conducive weather conditions in West Africa cocoa producing regions.

At the time, mixed grindings data for the third quarter of 2019 indicated a relatively weaker level of demand for Europe and North America whilst soaring demand was seen in Asia.

Furthermore, cumulative ports arrivals of cocoa in Côte d’Ivoire for the fourth week of October were established at 287,000 tonnes, up by 14% from the 252,000 tonnes recorded for the same period of the previous season.

During the month of October, the spread between the New York and London cocoa futures prices reduced drastically. This was fueled by a near trifold year on year increase in the volume of certified cocoa stocks from 7,632 tonnes to 22,184 tonnes on ICE US Futures, whereas they remained nearly stable on ICE Europe Futures.

As shown in Chart II the US dollar depre ciated by almost 2% during the analysis period whilst the ICCO daily price index firmed by nearly 1% compared to its value at the start of October 2019. This signals that cocoa prices found some support through the weakening of the US dollar. 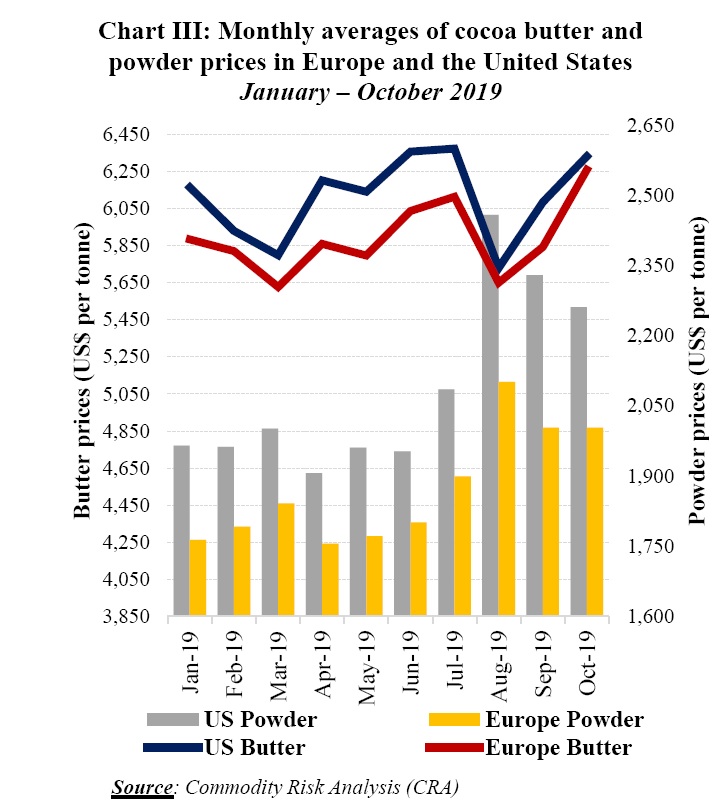 The dynamics in cocoa butter and powder prices in Europe and the United States as presented in Chart III indicate that, between January and October 2019 prices for cocoa butter and powder followed an upward trend on both leading cocoa consuming markets Indeed, p ric es for cocoa butter improved by 3 from US$ 6 164 to US$ 6 331 per tonne in the United States, whi lst in Europe they were up by 6 moving from US$5, 885 to US$ 6 260 per tonne.

In addition, compared to their average values recorded in January 201 9 the nearby cocoa futures contract prices progressed by 13% and 7% in London and New York respectively at the end of October 2019. They as cended from US$2,153 to US$2,423 in London, while in New York they progressed from US$2,303 to US$2,467 per tonne.

The 2019/20 cocoa season started with booming arrivals in both Côte d’Ivoire and Ghana. Indeed, as at 11 November 2019, cumulative arrivals of cocoa beans at Ivorian ports were reported at 446,000 tonnes, up 6% from 422,000 tonnes attained at the same period during the previous season.

Compared to the same period last year, grindings data released by regional cocoa associations showed diversity in demand in Africa, Europe, Asia and North America. Data published by the Ivorian exporters’ association (showed that Côte d’Ivoire’s grindings reached 5 47 ,000 tonnes during the 2018/19 crop season, up by 8% from 50 5 ,000 tonnes grinded over the same period of the previous crop year. For the third quarter of 2019, European grindings data published by the European Cocoa Association showed a 0 1 reduction at 36 2 940 tonnes. In addition, the Cocoa Association of Asia published an upsurge of 14 at 225 356 tonnes, while the National Confectioners’ Association published a 7.4% drop at 119,004 tonnes for North America.