ABIDJAN, Côte d’Ivoire – This review of the cocoa market situation reports on the prices of the nearby futures contracts listed on ICE Futures Europe (London) and ICE Futures U.S. (New York) during the month of July 2019. It aims to highlight key insights on expected market developments and the effect of the exchange rates on the US-denominated prices.

Finally, Chart III illustrates monthly averages of cocoa butter and powder prices in Europe and the United States since January 2019. 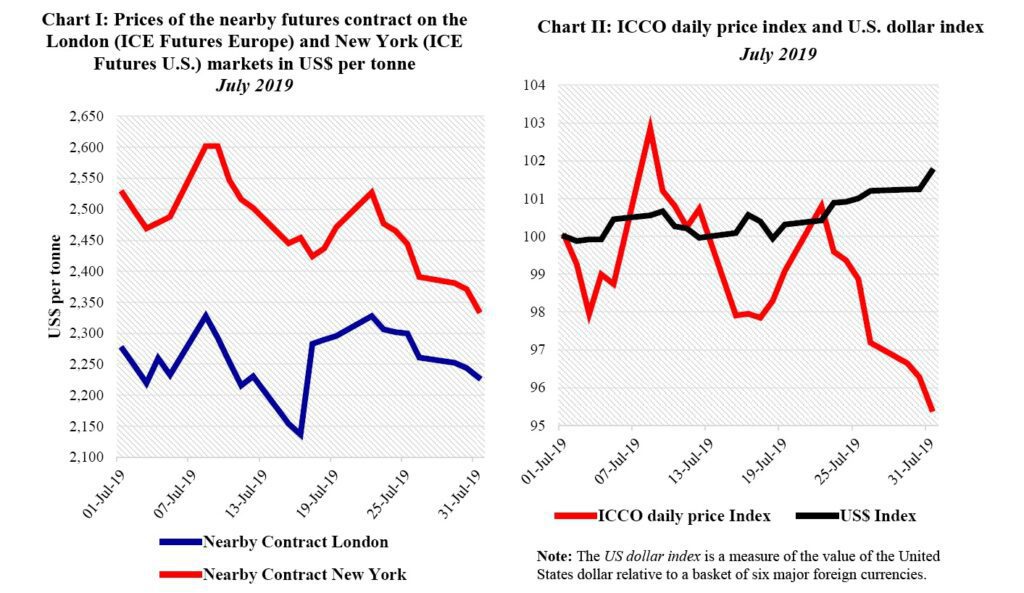 During July the nearby cocoa futures contract prices tumbled on both London and New York markets (Chart I). This bearish trend was generally an implication of the unfading ample supplies of cocoa beans from Côte d’Ivoire.

The evolution of the nearby cocoa futures contract prices followed four dominant sequences on both the London and New York markets during the month under review. In the course of the period 1-8 July, uncertainties on cocoa bean supplies stemmed from talks between the two top cocoa producers and the cocoa industry’s main players about the minimum floor price led to a slight boost in prices.

During the period 16 to 22 July, the increasing demand for cocoa in Asia and North America as mirrored in grindings data issued by their respective regional cocoa market associations fueled cocoa prices. Futures prices thus firmed by 9% from US$2,137 to US$2,328 per tonne and 3% from US$2,454 to US$2,527 per tonne in London and New York respectively.

From 22 July until the end of month, massive supplies of cocoa seen at Côte d’Ivoire main ports contributed to wear off the preceding upward trend in prices and the first position of cocoa futures contracts traded lower on both markets throughout the end of July In London, prices ebbed by 4 from US$2,328 to US$ 2,229 per tonne whereas in New York they were slashed by 8% from US$2,527 to US$2,337 per tonne.

The US dollar index gained 2% whilst the ICCO daily price index sunk by 5% over the analysis period. Subsequently, 2% of the deterioration seen in cocoa prices in the  market is due to the appreciation of the US dollar and the remaining 3% could be attributed to market fundamentals and other factors (Chart II). 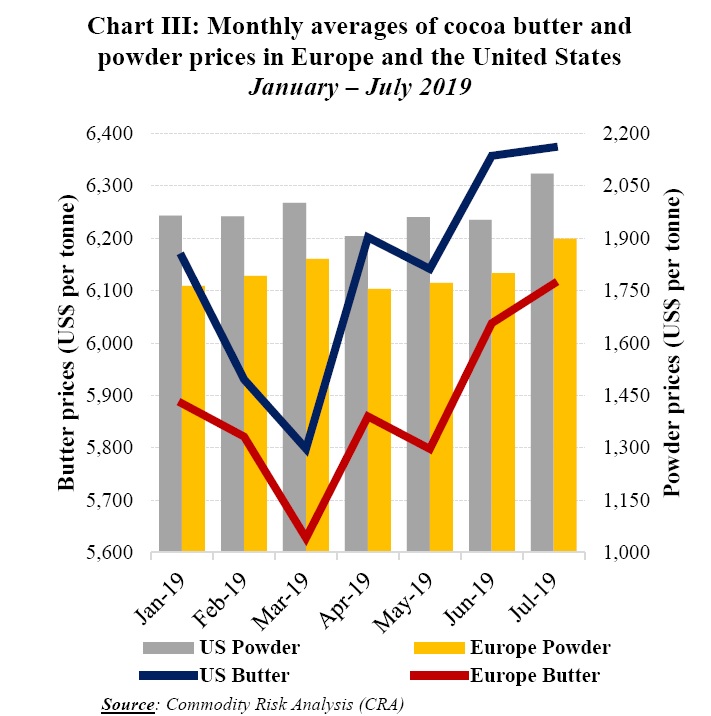 As portrayed in Chart III since the start of 2019 cocoa butter and powder have traded higher in the United States compared to Europe. Butter prices increased by 3% from US$ 6 164 to US$6,3 74 per tonne in the United States, while in Europe these prices gained 4% moving from US$5, 885 to US$6, 113 per tonne.

Despite the contraction observed in port cocoa arrivals data posted during the last week of July cocoa production for the current season in Côte d’Ivoire is heading towards a record performance Indeed, as at 5 August 2019, cumulative cocoa arrivals at Ivorian ports, since the start of the season was established at 2.138 million tonnes, up by 8% from the 1.972 million tonnes reached during the same period of the previous season.

Additionally between the start of the mid-crop on 1 April and 5 August 2019, cocoa beans at Ivorian ports hit 536,000 tonnes, up from the 472,000 tonnes recorded during the same period last year.

In Ghana the 2018/19 cocoa production is being severely harmed by the Cocoa Swollen Shoot Virus Disease (CSSVD) and production for upcoming crops could also be negatively affected. As at 29 July 2019, the Ghanaian Government reported that since the beginning of the current crop year 794,841 tonnes of cocoa beans were produced in the country. This represent s a 12% drop from the 900,000 tonnes forecast at the start of the ongoing cocoa season.

On the demand side a bullish stance was seen in the 2019 second quarter grindings figures for Asia and North America while in Europe, demand for cocoa diminished Indeed, the European Cocoa Association (ECA) declared data showed a year on year decrease of 32% to 344,890 tonnes in grindings.

By contrast, the Cocoa Association of Asia announced an increase of 16.28% to 215,574 tonnes year on year. In the same vein processing activities strengthened in North America during the second quarter of 2019, according to the National Confectioners’ Association (NCA), which reported a 3. 7 1% increase to 123,731 tonnes of cocoa beans grinded.