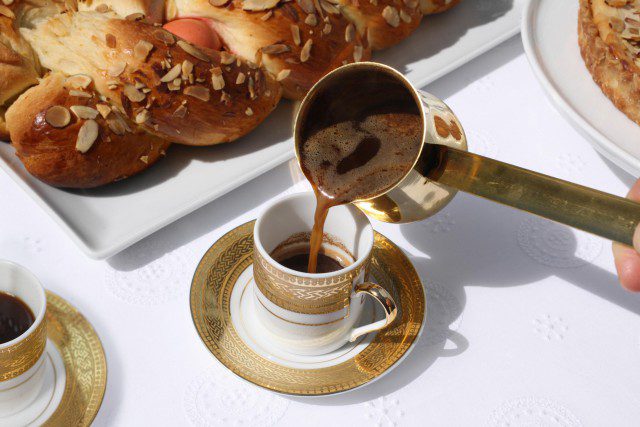 The answer to longevity may be far simpler than we imagine; it may in fact be right under our noses in the form of a morning caffeine kick. The elderly inhabitants of Ikaria, the Greek island, boast the highest rates of longevity in the World, and many scientists turn to them when looking to discover the ‘secrets of a longer life’.

In a new study in Vascular Medicine, published by SAGE, researchers investigating cardiovascular health believe that a cup of boiled Greek coffee holds the clue to the elderly islanders’ good health.

Only 0.1% of Europeans live to be over 90, yet on the Greek island of Ikaria, the figure is 1%. This is recognized as one of the highest longevity rates anywhere — and the islanders tend to live out their longer lives in good health.

Gerasimos Siasos, a medical doctor and professor at the University of Athens Medical School, Greece set out with his team to find out whether the elderly population’s coffee drinking had an effect on their health.

In particular, the researchers investigated links between coffee-drinking habits and the subjects’ endothelial function. The endothelium is a layer of cells that lines blood vessels, which is affected both by aging and by lifestyle habits (such as smoking).

The team homed in on coffee because recent studies suggest that moderate coffee consumption may slightly reduce the risks of coronary heart disease, and that it may also have a positive impact on several aspects of endothelial health.

From a sample of 673 Ikarians aged over 65 who lived on the island permanently, the researchers randomly selected 71 men and 71 women to take part in the study.

Medical staff used health checks (for high blood pressure, diabetes, etc.) and questionnaires to get more detail on the participants’ medical health, lifestyles and coffee drinking, in addition to testing their endothelial function.

The researchers investigated all types of coffee taken by participants — but interestingly more than 87% of those in the study consumed boiled, Greek coffee daily.

“Boiled Greek type of coffee, which is rich in polyphenols and antioxidants and contains only a moderate amount of caffeine, seems to gather benefits compared to other coffee beverages,” Siasos concludes.

The new study provides a new connection between nutritional habits and cardiovascular health.

Given the extent of coffee drinking across the world, and the fact that even small health effects of at least one type of coffee could have a large impact on public health, this study provides an interesting starting point.

However, further studies are needed to document the exact beneficial mechanisms of coffee on cardiovascular health.