Coffee lover Francesco Sanapo, owner of the florentine brand Ditta Artigianale, multi awarded barista champion and taster, will depart from Florence on August 4 on his bike for a tour that will take him to Apulia in the Specchia village. The goal: to raise awarness on climate change which - according to scientists – may put and end to the life cycle of coffee plants in around 30 years from now. Every leg of the tour will feature a talk with business and institutions key players, who will be welcomed by a specialty coffee, a different one every time Italian Coffee Tour is sponsored by Confcommercio Firenze, Fipe (the italian federation of public enterprises adhering to Confcommercio) Pissei, Hario and Rolling Dreamers who prepared Sanapo mentally and physically as explained by the coffe lover himself 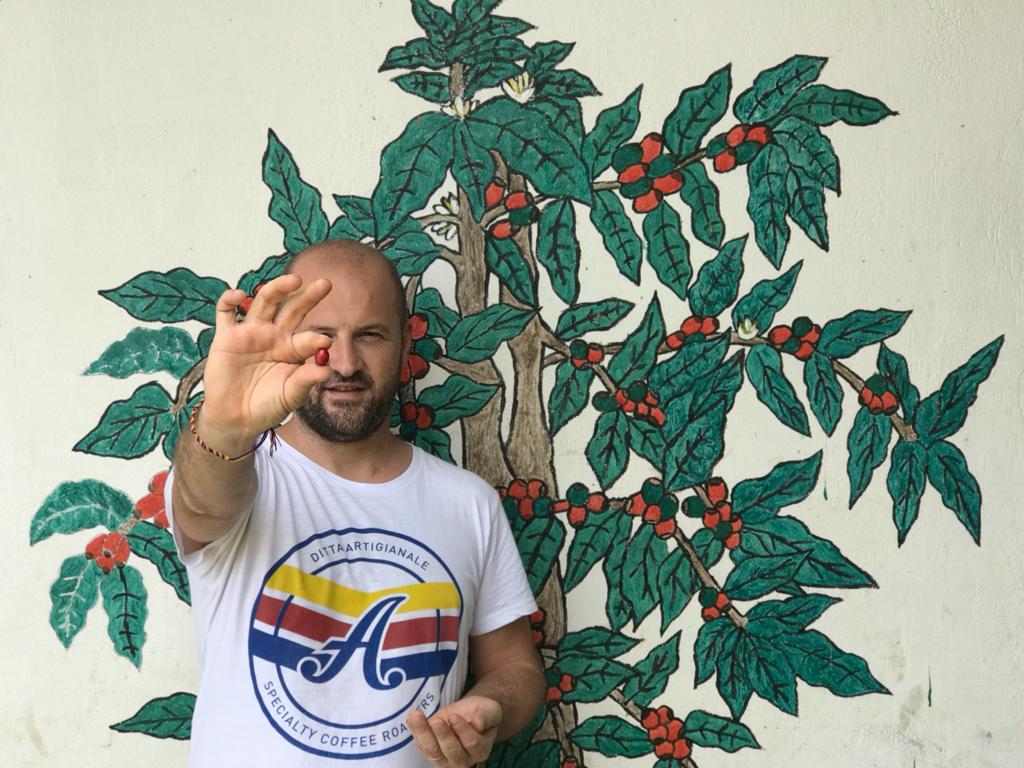 FLORENCE, Italy – ‘Many scientists believe that in around 30 years coffee could disappear from the face of the earth due to climate change’. The call for action among fans of the black beverage is launched again by Francesco Sanapo – a coffee lover, as he likes to call himself – multiawarded barista champion and coffee taster, owner of ‘Ditta Artigianale’, a micro roastery on the front line in terms of specialty cafes in Italy. Wednesday August 4 2021 Sanapo will depart on his bike, at the break of dawn, from his city of adoption – Florence – to embark on the Italian Coffee Tour, a huge promotional trip which will take him from Tuscany to Apulia, as well as Umbria, Marche and Abruzzo.

The goal: to raise awareness on environmental themes, in order to save coffee. To accomplish it, Sanapo on every leg of his tour will meet with several key players of the business and the institutions who will be welcomed by a specialty coffee (a product of excellence), a different one on each an every stop, coming from small plantations, prepared by Francesco with his very own ‘french press’.

“It’s a challenge with myself, I want to recount specialty coffee in squares and places where it is not so present by combining my two biggest passions, coffee and bikes”, said Sanapo.

Italian Coffee Tour is sponsored by Confcommercio Firenze, Fipe (the italian federation of public enterprises adhering to Confcommercio), Hario, a leading company in brewing tools, world renowned for the beauty and the absolute precision and functionality of its machines for alternative brewing methods, Pissei, a company specialised in technical cycling clothing with a captivating design and Rolling Dreamers who create tailor made experiences for cycling enthusiasts who prepared Sanapo ‘mentally and physically’ as declared by the coffee lover himself. 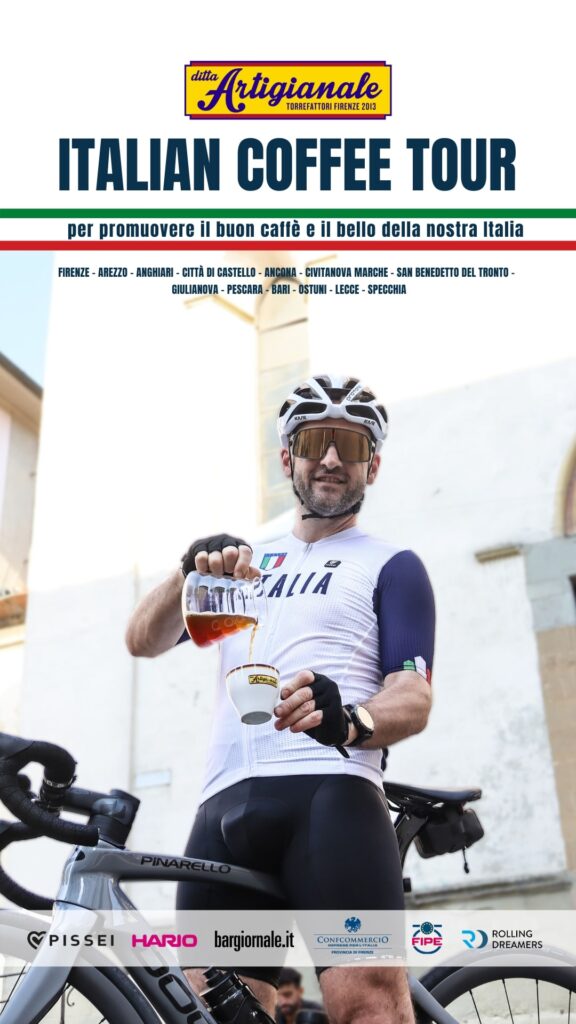 His cycling challenge will start on August 4 at 6am from piazza Sant’Ambrogio in Florence, where Sanapo recently opened the new Ditta Artigianale Carducci & Hario Cafè, where a meeting with Aldo Cursano, president of Fipe Toscana and Confcommercio Firenze, is scheduled in the former monastery: here in September the Coffee Academy will open its doors, an international project which aims to educate field professionals as well as coffee lovers in terms of production and taste, in collaboration with Confcommercio.

The first stop will take place in Arezzo, in the historical Caffè dei Costanti in San Francesco square around 10.30am to taste a great coffee – obviously! – with Francesco Marinoni, general manager of Confcommercio Toscana. After that, back in the saddle again to reach Anghiari and traverse Valtiberina, crossing the border with Umbria in the late afternoon, just in time to spend the night in Città di Castello, where a meeting with major Luciano Bacchetta, and several other who will be revealed on a later date, have been arranged.

The next day he will hop on his bike again to reach the Marche region where he will stop in Ancona (where he will be greeted by Cosimo Libardo, italian member of the Specialty Coffee Association board), Civitanova and San Benedetto del Tronto. Later, moving along the adriatic coast, he will traverse Abruzzo to stop in Giulianova and Pescara before finally reaching Apulia, with scheduled stops in Bari, Ostuni and Lecce. This tour of almost half of the country will reach an end in the salentine village of Specchia, Sanapo’s hometown. 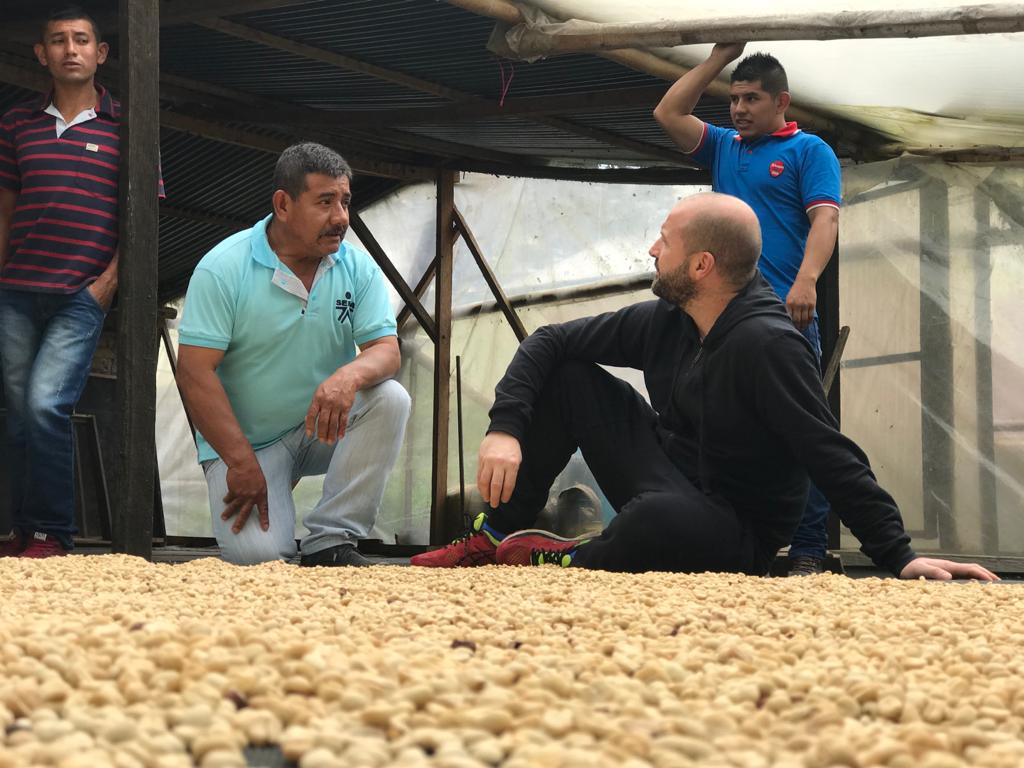 “We are facing the possibility of losing the pleasure of a cup of coffee, one of the most traditional and consolidated habits of our Italy”, explains Francesco Sanapo, “sadly, due to global warming, the ozone hole,the destruction of forests and the honeybee blight, before 2050 the lands where these precious beans are cultivated may no longer bear fruit. For this reason, I decided to do something real and concrete by combining my two big passions, coffee and bikes, for a thousand kilometers trip that will take me around six italian regions to speak about coffee and climate change, firmly believing that each and everyone of us can make a difference starting from small daily acts done in new, ecological and sustainable ways.”