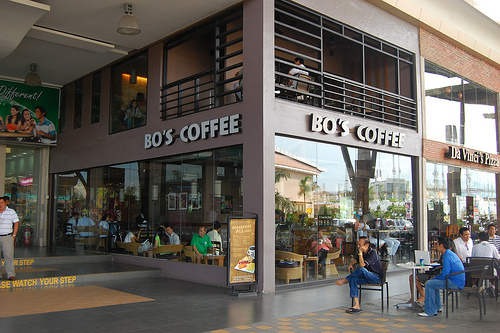 MANILA, The Philippines – Filipino chain Bo’s Coffee aims to opens its 100th store within the next couple of months, and later its first overseas outlet, in Qatar.

Chairman/president Steve Benitez says the company has secured a licensing deal with Qatari entrepreneurs, with international expansion being part of its long-term expansion plans.

Meanwhile, the company is concentrating on domestic expansion. The brand has 80 stores in the Philippines, mostly in Mindanao and the Visayas. Last year it launched an aggressive expansion in Metro Manila.

It has just opened two more outlets – its 90th outlet at SM Light Mall, a short walk from Boni MRT Station in Mandaluyong City, and the 91st at Ayala Terraces in Fairview, Quezon City.

“There has been a growing demand in the metropolis to open more cafes,” says Bo’s Coffee VP for brand and marketing Coochy Mamaclay.

Bo’s Coffee was launched in Cebu City by Benitez in 1996.

It has 30 outlets in Metro Cebu, and sources coffee beans from farmers in the Philippines. It also engages in other partnerships to help transform the lives of people in different communities.

“Each coffee shop serves as a window and platform for our homegrown partners, whose quality products may be unfamiliar to some,” says Mamaclay.

These include Tsaa Laya herbal teas and Theo and Philo chocolates.