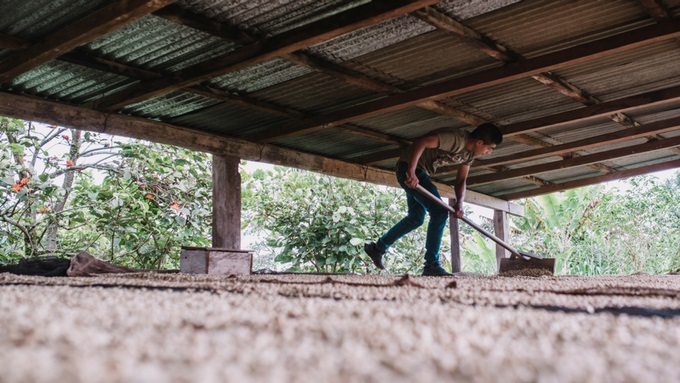 With his business partner, Robert Durret, the company works with regional coffee suppliers to bring a bigger profit to Peruvian coffee farmers. Levanta, not a coffee shop or roastery, aims to connect businesses in the United States—such as hotels or restaurants—directly with suppliers, to give coffee farmers a bigger chunk of the overall profit.

“Our business model starts with paying the farmers more,” Hohler explained.  “We’re trying to make [coffee farming] a better job, and leave it up to the farmers to decide how to best spend their money (while enhancing their) visibility, which plays out in our storytelling,” he said.

The company focuses on the people who pick and produce the beans, to bring the consumer closer to the source. “The families’ stories show just how complex [the coffee trade] really is,” Hohler said.

He cited lack of education, government systems, corruption, weather, infrastructure, and global marketing pricing as the biggest obstacles for direct-trade ventures. “Connecting the consumer with the producer like this puts their stories out for everyone to hear, We’re hoping the stories resonate with people.”

Levanta Coffee’s business model differs from traditional fair-trade (where farmers receive about 20 cents for each pound of coffee, once a year), a 50 percent bonus is given directly to the coffee producer, twice a year, according to Hohler, a doubling in revenue for the coffee farmers annually.

The company is based in Peru, but the co-founders met while teaching English in Honduras in 2013. While there, Hohler and Durret came up with the idea for Levanta Coffee after witnessing the conditions and circumstances of coffee farmers in the area.

“I was amazed by the disconnect between where coffee comes from compared to how much we consume it,” Hohler said. The co-founders chose Peru specifically for its business-friendly atmosphere, and for its leadership in fair-trade coffee production.

Hohler acknowledges the scope of the task at hand.  “Coffee is responsible for the livelihood of about 25 million people. To try and make a dent in that is overwhelming,” he said.

“Levanta will transition into a wholesale business-to-business model so that we can sell more volume,” he explained.

Levanta, a “people-focused coffee company,” will use the proceeds from a Kickstarter campaign to fund the online store business, as well as nurture the wholesale relationships the company has formed with regional cooperatives.

As the company grows, focus will be on specific regional communities, to form true partnerships. With a degree in Public Health, Hohler wants to bring issues such as malnutrition and food shortage into Levanta’s future.

He also cited trust as another industry obstacle. “You’re dealing with poverty, and a volatile market, so there’s mistrust involved [ . . . ] it’s really important that we’re able to build trust between our partners in the long term,” he said.

How you can help

The Levanta Coffee Kickstarter campaign offers coffee-related rewards with direct shipping straight from the gowers. Hohler plans to expand to other regions, but for now, will focus on suppliers in Peru and Honduras. There is also a yearly subscription option.

“If you donate on Kickstarter, you’re allowing us to start the company,” Hohler explained. “We want to work with coffee shops, boutique businesses, to have a product that they can really stand behind, which allows us to sell more coffee, bring on more producers and create a bigger impact.”

and their Kickstarter campaign here.

Update: Levanta Coffee has already passed its Kickstarter goal on July 25 and now has a further goal to collect a total sum of US$50,000 in order to buy coffee from a third Peruvian farmer.