EU opens an investigation into possible trade restrictions by Mondelēz 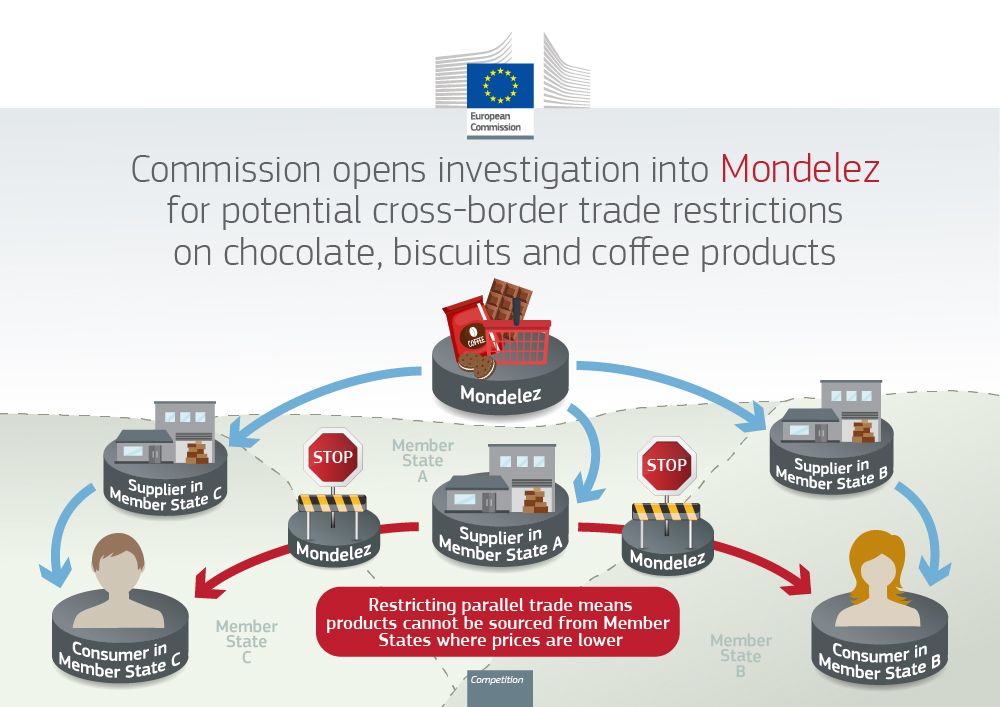 BRUSSELS, Belgium – The European Commission has opened a formal antitrust investigation to assess whether Mondelēz has restricted competition in a range of national markets for chocolate, biscuits and coffee by hindering the cross-border trade of these products between EU Member States, which would be in breach of EU antitrust rules. Executive Vice-President Margrethe Vestager, in charge of competition policy, said: “Chocolates, biscuits and coffee are products consumed by European citizens daily.

We are opening a formal investigation to see whether Mondelēz, a key producer of these products, might have restricted free competition in the markets concerned by implementing various practices hindering trade flows, ultimately leading to higher prices for consumers. Trade in the internal market can lower prices and increase the variety of products offered across Member States. ”

Mondelēz is one of the largest producers of chocolate, biscuits and coffee in the European Union. The markets for the sales of these products are worth tens of billions of Euros every year.

The Commission is concerned that Mondelēz may have restricted the so-called ‘parallel trade’ of its chocolates, biscuits and coffee between EU Member States through agreements and unilateral practices. Traders and retailers try to procure products in the internal market where the prices are lower and trade them to markets where prices are higher. This generally leads to price decreases in countries where prices are higher. Restrictions to such parallel trade can lead to the isolation of a national market whereby the manufacturer or supplier can charge higher prices to the detriment of consumers. Restrictions to parallel trade can also lead to less product diversity.

In particular, the Commission will investigate certain potentially anti-competitive practices by Mondelēz including:

If proven, the agreements and practices under investigation may create anticompetitive obstacles to trade within the EU Internal Market in breach of Articles 101 and/or Article 102 of the Treaty on the Functioning of the European Union (TFEU).

The Commission will now carry out its in-depth investigation as a matter of priority. The opening of a formal investigation does not prejudge its outcome.