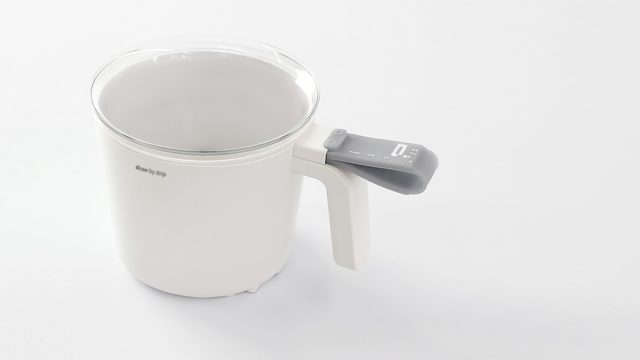 NEWPORT BEACH, Calif., U.S. — Peter’s Pantry Inc. has just unveiled Draw by drip, the coffee server with an integrated scale and timer to Kickstarter. Draw by drip allows professional and home baristas to cut down on costs without having to sacrifice quality brewing performance.

A traditional coffee set up consists of five separate pieces: dripper, kettle, server, scale, and timer. Draw by drip combines three of these products into one harmonious design.

The handle has a hidden built-in LED display that lights up once the user begins the brewing process.

All of Draw by drips functions can be controlled by two easy to access buttons. These two buttons can turn Draw by drip on/off, tare the scale, start/stop the timer, and calculate the amount of coffee extracted.

“When I first started making pour-over coffee at home, I purchased all of the recommended accessories. Over time, I realized how cluttered by tabletop was and how difficult it was to take all of these accessories on the go. I created draw by drip so that it would perform all of the necessary functions for coffee brewing and be able to fit in with any environment,” says Peter Park, Founder & CEO of Peter’s Pantry Inc and inventor of Draw by Drip.

Draw by drip’s primary functions include:

Peter’s Pantry has also collaborated with Holzklotz to create an exclusive dripper for a draw by drip’s Kickstarter campaign.

Pre-orders for Draw by drip are now available on Kickstarter with prices starting at $49. After the campaign, the company anticipates manufacturing and delivery to be fulfilled by the end of February 2019.

Any influencers or journalists interested in receiving a sample and reviewing Draw by drip are encouraged to submit an inquiry through Draw by drip’s Kickstarter page.

Here is how artificial intelligence and big data are changing the worl...

Carimali touchless solution allows to safely select your drink via a Q...