Growth in the coffee makers segment (50% of revenues), despite the discontinuities in the single serve machines slowed down the trend’s speed, was sustained in the year, with a double digit acceleration in the fourth quarter, driven by full-automatic and manual machines, both growing double-digit. The sustained growth of the coffee categories has allowed the company to benefit from a favorable product mix, in continuity with previous years.

Furthermore, the Board of Directors of De’ Longhi S.p.A.:

“We closed the year 2019 with results that, in light of the difficult market conditions of the year, we consider satisfactory, in particular from the point of view of the cash generation. We are now facing a very challenging time, for the industry and for the world economy in general; I am proud of the resilience and dedication shown by our teams so far.

Today, I can confirm full operations for our Italian and European production and distribution platform, with inventories constantly increasing and sufficient to guarantee business continuity even in the event of further restrictions decided by the Government.

All the other Italian service and back-office functions are operational with a view to maximize the use of flexible working practices suggested by the Government. The Chinese platform has reached a production capacity of over 80% and is expected to reach 100% by end of March.

Finally, the first months of this 2020 show a buoyant turnover trend, in line with our initial expectations; this trend is still certainly supported by the effects of the advertising investments incurred last year. There is no doubt that in this constantly changing context, visibility for the coming months is limited.

Uncertainties about how consumption and market development will be affected by the ongoing epidemic will have an impact on economic growth in the coming months. Therefore, more precise indications on 2020 will be communicated as soon as the general picture has normalized”

1 The financial statements (“reported”) 2019 include the effects of the application of the accounting standard IFRS 16. Furthermore, starting from the fourth quarter, some financial discounts, previously classified under financial charges, have been included among the commercial premiums and therefore netting revenues. For comparative purposes, the values are presented “normalized”, comparable with those of the previous year, thus excluding the aforementioned effects deriving from the application of IFRS 16 and the reclassification of financial discounts.

2 “Organic” stands for at constant exchange rates and excluding the impact of derivatives.

Here are the main points of the Results summary and business review released by the company: 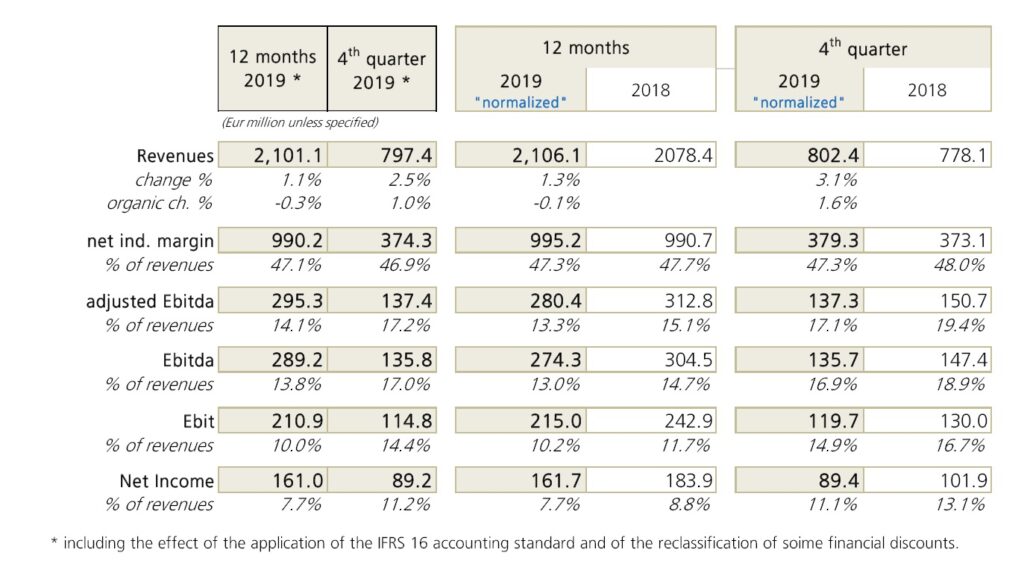 2019 was a year made challenging by some negative factors both of endogenous and exogenous nature, which conditioned the growth path and consequently the final results. More precisely, we quantified the impacts deriving from endogenous factors in a total value of approximately 36 million Euros, net of which the growth in revenues would have been 2.8%.

As already highlighted in the previous quarterly press releases, some discontinuities affected the De’ Longhi Group’s performance, especially in the first half of the year: the decision to reorganize our presence in Latin America and Turkey; the anticipation to 2018 of some import flows from China to the United States of the comfort category products in light of the increase in US customs tariffs; discontinuities in the distribution of capsule coffee machines in some important markets; the exit from the distribution of large appliances in the Australian market.

However, despite these discontinuities and a general competitive context that has become increasingly challenging, the management has nevertheless decided to push on the lever of advertising spending with the aim of supporting and strengthening its leadership in the main markets and product categories. The general effect on margins, as we will see later, was therefore of compression, even if temporary, to the benefit of the sustainability of the commercial strategy and of the profitability in the medium-long term.

In terms of results, the official reported figures have included the application of the new accounting standard IFRS 16 (relating to the accounting treatment of leases) as well as, starting from the fourth quarter, of the new Group commercial policy which led to the reclassification of financial discounts as commercial premiums, hence netting revenues. For the purposes of this press release, for a more linear comparison with the 2018 data, the “normalized” data are commented, i.e. excluding the effects of the above mentioned accounting treatments.

This growth is attributable to the positive contribution of exchange rates and hedging, equal to € 29.3 million: in organic terms, therefore, revenues showed a trend substantially in line with 2018 (-0.1%).

On a trend level, the fourth quarter was growing by 1.6% organic, in line with the previous two quarters (+ 2.1% in Q2 and 1.6% in Q3 in organic terms), but without the expected acceleration, especially due to the effect of an underperforming APA region.

In fact, looking at revenues by geographies, in normalized and organic terms, 2019 showed a European area in moderate growth and overall more dynamic than the nonEuropean markets, held back by the discontinuities already mentioned.

Similarly to the evidence for the geographical areas, 2019 was a difficult year to read, due to the non-recurring elements that affected its final result in the various product categories.

Growth in the coffee makers segment (50% of revenues), despite the discontinuities in the single serve machines slowed down the trend’s speed, was sustained in the year, with a double digit acceleration in the fourth quarter, driven by full-automatic and manual machines, both growing double-digit.

There was no positive surprise from the food preparation segment, which ended the year with a mid-single digit drop, although the fourth quarter was partially improving but still in negative territory. In the latest months, some product categories, such as blenders and handmixers, have achieved significant recoveries, but not enough to stabilize the category as a whole, which has continued to show little dynamics, also due to underlying markets that are not particularly favourable.

The cleaning and ironing sector ended 2019 in positive territory with normalized mid-single digit growth in both product families, despite a marked deterioration in the end of the year.

Finally, the portable air conditioning and heating sector showed a marked drop due to the important discontinuities that affected sales during the year, especially in the first quarter: in addition to the increase in import duties from China to the United States, which have altered the timing of sales, the latest months have shown an unfavourable seasonality from a climatic point of view, which has slowed sales and deliveries in the quarter.

The performance of operating margins was partially conditioned by the rise in industrial costs, in line with expectations, and by the effects of the worsening competitive scenario, whose tensions required a policy of interventions to protect market shares. Indeed, greater investments in communication, promotional activities and support of distribution and sales networks have been necessary, especially in some markets, with the primary goal of ensuring adequate visibility for our products and seizing the opportunities offered by the growing component online distribution: during the year, a total of € 245.4 million (+ € 18.2 million compared to 2018) was invested in communication and promotional activities, with an increase in the weight of revenues from 10.9% to 11.7% (and from 12.4% to 13.5% in the fourth quarter).

On the other hand, the sustained growth of the coffee categories has allowed the company to benefit from a favorable product mix, in continuity with previous years.

In the fourth quarter, the comparison with 2018, in normalized terms, returned a picture of general compression of margins, for a more accentuated cost trend in terms of non-industrial costs: the adjusted Ebitda of 137.3 million, was it stands at 17.1% of revenues, from 19.4% of the previous year. A partial recovery of this drop in margin, as a percentage of revenues, showed an operating result level of € 119.7 million, which fell from 16.7% to 14.9% of revenues.

Net financial charges for the year amounted to € 18.3 million, a decrease of € 0.7 million compared to the previous year, mainly as a result of higher liquidity management income and lower financial discounts. opposing higher charges on exchange rates and hedges.

In terms of net working capital, 2019 closed with a value substantially in line with the 2018 financial year (a reduction of € 4.4 million), thanks also to a sharp drop in inventories (€ 61.3 million). In relation to revenues, normalized net working capital improved from 15.5% to 15.1%.