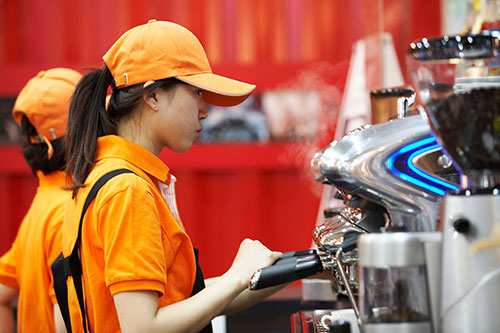 For coffee producers, Korea is an attractive market as coffee consumption here has been sharply growing over the past decade.

Some coffee experts predict that Korea will be one of the top 10 coffee consuming nations in the near future. Currently Korea is the world’s 30th-largest coffee consuming country, according to the National Coffee Association of the United States.

The potential for growth in the Korean market has motivated diplomats from countries which rely heavily on coffee exports as a source of national income.

They are ratcheting up efforts to promote their products aggressively in the Korean market.

The opening of the second franchise store comes just months after the first flagship store opened in Seoul in March.

During a speech at the opening ceremony, Pinilla thanked those who were involved in the decision to open the second store. “Colombian coffee and culture will have stronger presence in Korea,” he said.

Pinilla expressed hope that more Juan Valdes coffee shops open in other parts of the country, so that more Koreans can enjoy the flavor and taste of Colombian coffee.

The expansion of the Colombian cafe chain in Korea comes soon after coffee producers and industry experts from 32 countries, including Guatemala, Honduras and Costa Rica, joined the 13th cafe show held from Nov. 12 to 15 at the COEX in southern Seoul.

“Coffee producers and experts from 32 coffee-producing countries joined the four-day event. Last year, we used three halls at COEX and a total area used for the event was 28,000 square meters. But this year, we had to use 36,000 square meters of halls for the show due to an increase of participants,” she said.

“Over the past five years, we’ve seen increasing interest from global coffee exporters in the cafe show.”

Vietnam is No. 1 coffee exporter to Korea, marking nearly 38 percent of Korea’ entire coffee bean imports, according to the Ministry of Food and Drug Safety report in 2012. Brazil (15 percent) and Colombia (11 percent) are two other primary countries from which Korea imports coffee.

The majority of coffee beans imported from 83 countries are Robusta beans that are used for instant coffee.

Compared with Arabica beans, Robusta has a stronger, harsher taste and is considered inferior quality.

In the past, instant coffee had dominated coffee consumption in Korea.

Recently, however, a surge of espresso coffee shops here has facilitated the imports of Arabica coffee beans. This signified that there will be a major change in the import of coffee beans.

Coffee exporters see this as a window of opportunity as Koreans’ changing coffee taste from instant to espresso coffee will push demand for Arabica coffee beans they are producing.

The free trade agreement (FTA) is another factor that will affect the coffee market.

Following the implementation of the Korea-U.S. FTA, coffee imports from the United States have continued to increase, according to industry experts.

Coffee-producing countries like Colombia which signed an FTA with Korea are likely to benefit as tariffs on coffee imports will be reduced once the trade pact goes into effect.

In an interview in 2012, Robert Nelson, former president of the National Coffee Association of the United States, predicted that Korea will be a top 10 coffee consuming country in the years to come.

He said he was surprised to see a rapid increase of espresso coffee shops in Korea during the short time period.

The coffee industry scrambles for fresh beans to meet demand from stoc...