IBAGUE, Tolima – With a score of 90.2, Ms. Astrid Medina, coffee grower from the municipality of Planadas in the department of Tolima, won first place in the 13th edition of the Cup of Excellence Competition.

The competition’s awards ceremony was held at the Convention Center in Ibague and was presided by the Colombian Coffee Growers Federation’s (FNC) CEO, Luis G. Muñoz, as well as Cup of Excellence delegates and jurors.

Ms. Medina was enthusiastic, “This is an amazing accomplishment. Thank God we won. Coffee is wonderful and we mustn’t let it go to waste.

This achievement translates into a better future for Gaitana and for Planadas (her hometown). We women are boundless and beautiful. Although being a coffee grower is challenging, it’s a wonderful dream. I only grow my coffee based on good practices.” Astrid specifically thanked the FNC’s Extension Service for the permanent support it provides to coffee growers.

After a strict domestic pre-selection and selection process, a group of 25 international judges from countries including Australia, Canada, China and Japan evaluated and selected the samples without knowing their origin.

The jury based its evaluation on quality criteria that included fragrance, aroma, acidity, sweetness, cleanness of the cup, flavor, mouth feel, aftertaste and balance.

The 31 lots that received more than 85 points on the Specialty Coffee Association of America (SCAA) scale will participate in a real-time online auction on April 23. Buyers from all around the globe will have the chance to bid for the best Colombian coffees. The auction can be followed at www.cupofexcellence.org.

The 31 lots that will be auctioned from the following Colombian coffee regions: 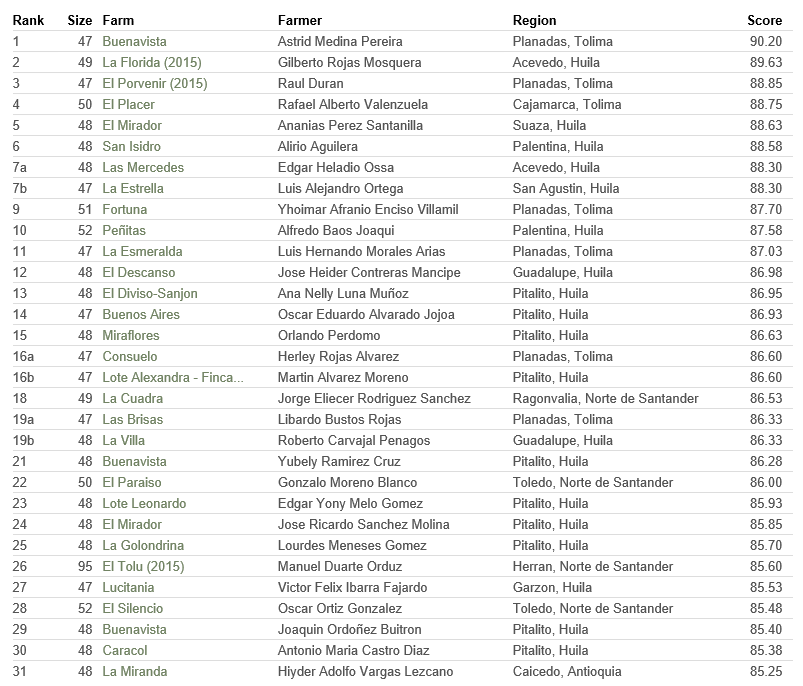 The annual Cup of Excellence competition in Colombia seeks to stimulate and provide visibility to the production of high quality Colombian coffees.

It is part of the FNC’s differentiation, value added and positioning strategy and is organized in conjunction with the Alliance for Coffee Excellence, which designs and implements its rules and standards.

Cup of Excellence has generated higher income to the coffee growers who have been able to sell their coffee through the online international auction. In 2014, Cup of Excellence champion Carmen C. Montoya auctioned her coffee at a record price of US$45.70 per pound.

However, the importance of this event goes beyond selling exceptional coffees in prestigious markets. The competition positions Colombian coffee in the fastest growing segments and, particularly, in the segment of independent baristas.

This serves as a platform for disclosing Colombia’s regional denominations of origin and microclimate diversity, which are what makes Café de Colombia an ideal and versatile product for the most sophisticated and differentiated markets.

“Cup of Excellence is one of those events that changes peoples’ lives. Some telling examples are Arnulfo Leguízamo from the department of Huila and Carmen C. Montoya from Antioquia who, thanks to their effort and dedication, sold their harvests at prices far higher than the standard.

Our goal is to help all of you change your lives for the better,” noted Luis G. Muñoz during the awards ceremony.