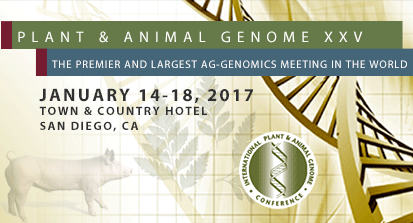 SAN DIEGO, U.S. – While international teams continue making advances into coffee plant genomics, researchers from Colombia and elsewhere have taken steps to flesh out the biology and potential vulnerabilities of a pest that plagues the global coffee industry: an insect called the coffee berry borer beetle, Hypothenemus hampei.

At the annual Plant and Animal Genomes meeting here this week, National Center for Coffee Research (Cenicafe) scientist Lucio Navarro provided an update on efforts to sequence and interpret the coffee berry borer genome during a session on coffee genomics.

The team has been examining protein-coding patterns and more in the latest version of the coffee berry borer genome in the hopes of coming up with strategies to control the pest.

Back in 2012, Cenicafe’s Ricardo Acuña and colleagues from Colombia, the US, and South Korea published a paper in the Proceedings of the National Academy of Sciences that described a mannanase enzyme-coding gene that the coffee berry borer beetle apparently obtained from bacteria in its gut.

And in 2013, the US Department of Agriculture offered up $1 million in funding for research on strategies for tackling the coffee berry borer, a scourge of Hawaiian coffee crops that was implicated in losses believed to exceed more than $9 million in the two years leading up to the funding move.

Researchers from the USDA’s Agricultural Research Service, New York University, King Abdullah University of Science and Technology, and elsewhere published information on a 163 million base draft genome for the coffee berry borer in the journal Scientific Reports in 2015.

It also provided evidence of horizontal gene transfer involving not only mannanase, but several other bacterial genes as well.

For their own recent analyses, Navarro and his colleagues upgraded an earlier version of a coffee berry borer genome that had been generated by Roche 454 FLX sequencing, using Illumina short reads from male and female coffee berry borers to produce a consensus assembly spanning around 160 million bases.

The assembly is believed to represent roughly 96 percent of the insect’s genome.

In addition to producing a genome with improved contiguity levels, he reported, members of that team also combined 454 and Illumina reads to get consensus transcriptomes for the beetle. With these and other data, they identified almost 22,000 gene models, novel transposable element families, and their own evidence of horizontal gene transfer.

The team has started looking at the genes that might provide clues for future pesticide development, including G-protein coupled receptor-coding genes, Navarro noted, and plans to delve deeper into mechanisms of sex determination in the coffee berry borer.

Results so far point to apparent structural differences between genome assemblies produced by female coffee berry borers, which are diploid, and males, which contain two copies of the genome but are effectively haploid due to genomic condensation.

“This information, along with the identification of several genes involved in sex determination mechanisms, are essential to elucidate the sex-determination process in the insect,” Navarro and his co-authors noted in the abstract accompanying the PAG presentation.

As part of the same conference session, a University of California, Davis researcher presented information on a genome assembly for the widely grown coffee plant Coffea arabica, which was sequenced using Pacific Biosciences technology and assembled with Dovetail Genomics technology.

The genome sequence, along with transcriptome sequences for C. arabica plant tissues, is being made available through the Phytozome.net database.