ABIDJAN, Côte d’Ivoire – Since the beginning of the 2021/22 cocoa year, crop outputs from the two top world cocoa producers i.e., Côte d’Ivoire and Ghana, which represent together around two-third of the global cocoa production, are lagging behind levels recorded for the previous season. The Conseil du Café-Cacao (CCC) of Côte d’Ivoire has announced that the country’s crop for the ongoing season is expected to decline by 10% year-on-year.

In Ghana, purchases of graded and sealed cocoa reached 42,768 tonnes at as 28 October 2021, down by 45% year-on-year from 78,078 tonnes. If the first two months of cocoa arrivals and purchases are indicative of the trend for the current season, then cocoa production can be anticipated to fall behind that of the past season.

However, at this very early stage of the season, caution needs to be exercised as production is subject to changes due to weather and other unforeseen factors (for example pests and diseases) that may evolve during the season.

The weather is one of the main factors affecting the cocoa production cycle and its performance for the period starting from April to prior to the start of the cocoa year (i.e., October) tends to be very important for the evolution of the cocoa crop. It is worth noting that it takes approximately five months for cocoa pods to develop – from flowering to pod ripeness.

With Africa accounting for 77% of global production, the weather conditions in the region can give a bird’s eye view of what can be expected for global production. For the 2021/22 season, the traditional development period for the main crop of key producing countries in West Africa witnessed below average rainfall.

This must have contributed to the slow start of the main crop harvest in the two top producing countries – thus the current year-on-year decline in arrivals and purchases.

The rainfall from October through to November has however been beneficial to the current season’s crop. November is the start of the dry season, but the unseasonal rains have provided ideal temperatures for the crop unlike the hot, dry weather that should be occurring at this time of the year in West Africa.

The weather phenomenon La Niña had been predicted for some time now and the unseasonal rainfall taking place at this time of the year in West Africa indicates a high chance of its occurrence. Concerns have been raised that should the heavy rains continue, the quality of beans could be affected as a result of high moisture, black pod outbreak and lack of sunshine to dry the harvested beans.

Similar to the past few seasons, a mild Harmattan is projected for the December to March period. Should this be realized, then the mid-crop could result in a good harvest.

Futures prices moved downwards as covid-19 seems to bounce back

The cocoa futures market was generally bearish in November despite the year-on-year lower arrivals and purchases of cocoa beans recorded in the major producing countries of West Africa.

The adequate meteorological conditions that prevailed in West Africa’s main cocoa growing regions coupled with concerns of possible restrictions amid the accelerated spread of the Omicron variant of the COVID-19 weighed on the December 2021 (DEC-21) and March 2022 (MAR-22) futures contracts prices. It is noteworthy that these two contracts price cocoa for the 2021/22 main cocoa season, which runs from October 2021 to March 2022. Figure 1 shows price movements on the London and New York futures markets respectively at the London closing time in November 2021, while Figure 2 presents similar information for the previous year. 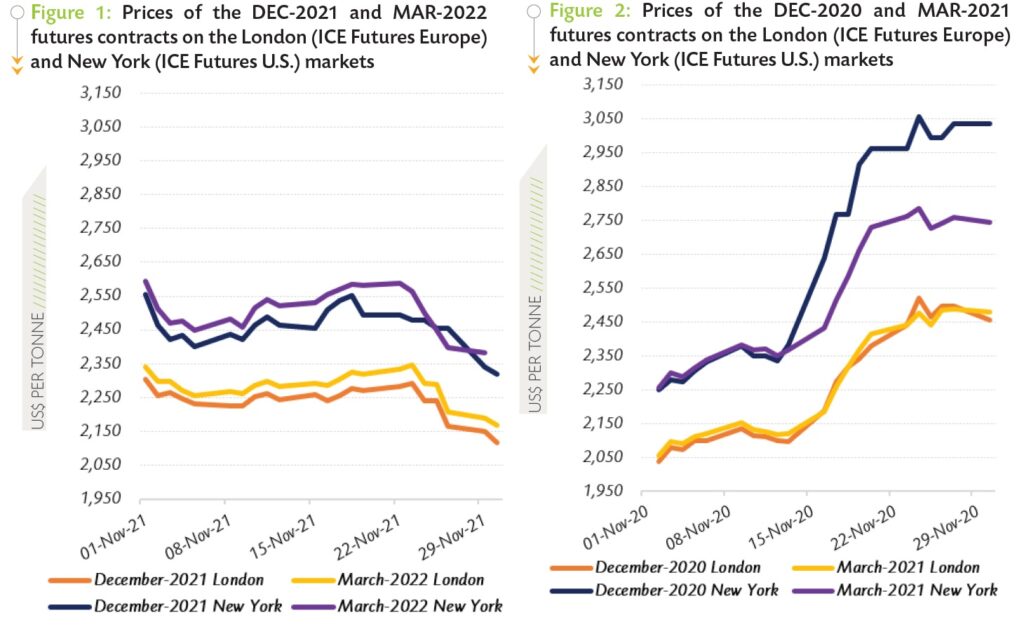 Back in November 2020 (Figure 2), both the London and New York markets were bullish in reaction to concerns of potential disruptions in the haulage of cocoa beans in Côte d’Ivoire. Moreover, the New York market was under pressure from 13 November onwards because at the time a long position of 4,000 DEC-20 contracts was exchanged for 40,000 tonnes of physical cocoa, and this transaction triggered a palpable market tension.

Cocoa futures markets were relatively stable over the first three trading weeks of November with prices of the front month contract averaging US$2,256 per tonne and US$2,475 per tonne in London and New York respectively.

Thereafter, prices tumbled to a one-year low in London over the last trading week of November settling at US$2,117 per tonne. In New York, prices of the DEC-21 contract plunged to US$2,320 per tonne, representing a five-month low.

This bearish stance was triggered by several factors: on the one hand, market participants were of the view that the conducive cocoa growing conditions that prevailed in West Africa were likely to favour the good development of the crops in the region, and thereby result in plentiful supplies of cocoa beans. This amplified thoughts that the global cocoa production could lead to another supply excess for the ongoing cocoa year.

On the other hand, the rapid increase of new cases of COVID-19 contaminations worldwide due to the variant Omicron raised concerns over new restrictions that in turn, could impact negatively the global commodity market including cocoa. In a nutshell, current market conditions suggest that, while meteorological conditions are supportive of another big crop output for the 2021/22 cocoa year, demand for cocoa is threatened by the resurgence of the COVID-19 in major consuming markets.