ABIDJAN, Côte d’Ivoire – The report on the movements of cocoa futures prices for the month under review are based on the May-2021 (MAY-21) and July-2021 (JUL-21) futures contracts as listed on ICE Futures Europe (London) and ICE Futures U.S. (New York). It aims to provide insights into the price developments for these two specific futures contracts.

Figure 1 shows price movements on the London and New York futures markets respectively at the London closing time in May 2021, while Figure 2 presents the equivalent information for the previous year. 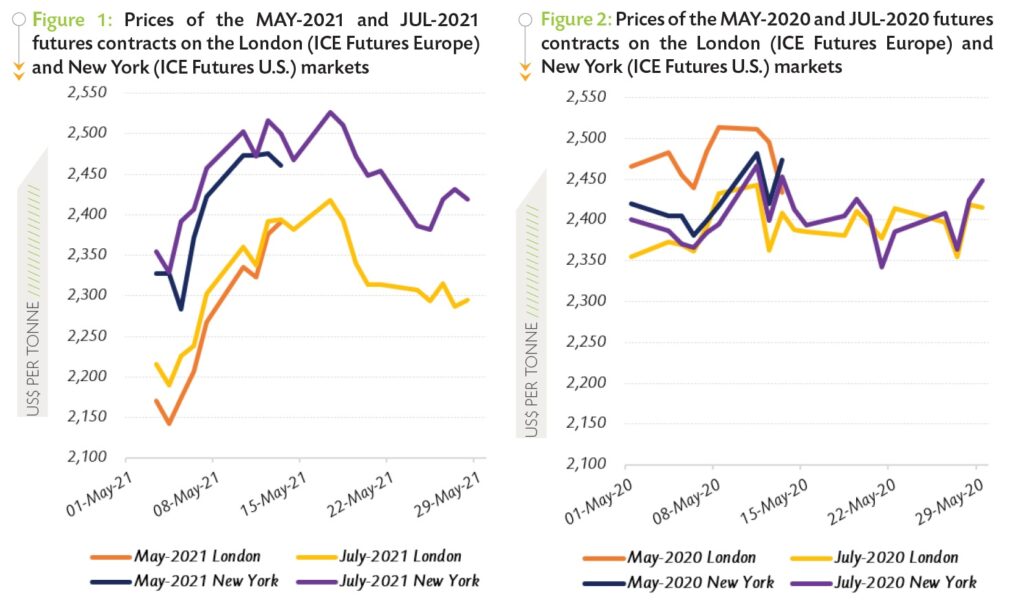 Looking back at May 2020, a backwardation was observed on both sides of the Atlantic (Figure 2).

At the time, market participants were envisaging potential disruptions in the shipments of cocoa beans following the Ivorian government’s announcement of the extension of the state of emergency in the country to curb the spread of the coronavirus pandemic.

Furthermore, cumulative arrivals of cocoa beans in Côte d’Ivoire were lower in May 2020, year-on-year.

The upward trend seen in prices during this period was mainly fuelled by weather concerns. Below-average precipitations were recorded in Côte d’Ivoire’s main cocoa producing regions.

Indeed, unusually low rainfall in most of the cocoa growing regions of the country were reported to likely reduce the bean size and further threaten to shorten the April to September mid-crop.

From 14 May onwards, with the expiry of the MAY-21 contract, prices of the JUL-21 contract witnessed a short-lived increase to reach their highest level of the month on 17 May 2021 settling at US$2,418 per tonne in London and US$2,526 per tonne in New York.

Figure 3 presents the net short positions for commercial traders in Europe over the period 2018/19 – 2020/21, while Figure 4 portrays the same information in the United States.

The size of net short positions can be thought of as a demand for an “insurance” against price drops; and its change over time assesses the evolution of the risk perception of the entire spectrum of merchants and producers in the cocoa futures markets.

The weekly report on the Commitments of Traders is the source of information. 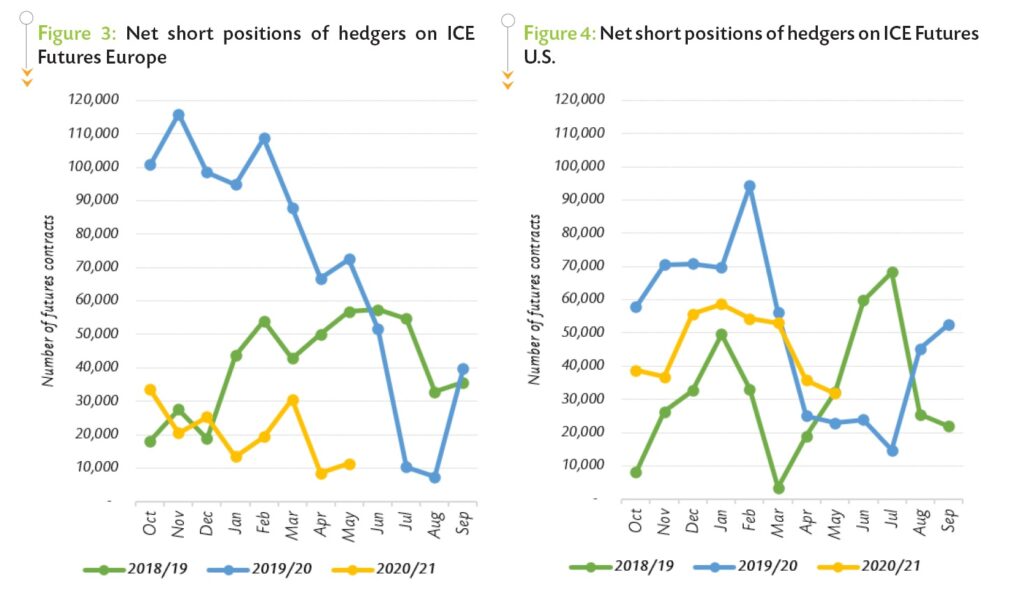 The COVID 19 pandemic reducing the risk perception of a bearish market has in turn reduced the need for an “insurance”. The decline is more pronounced on the London futures market because the hedgers in this market preferred to reduce their risk exposure as a result of the introduction of the LID, which technically introduced a risk that cannot be hedged.

In May 2021, stocks of cocoa beans with valid certificates in European warehouses averaged 122,759 tonnes; representing approximately two-thirds (73%) of the total certified stocks. As illustrated in Figure 5, stocks with valid certificates increased by 11% as compared to their average level of 111,058 tonnes seen a year earlier. In the United States, total stocks increased by 21% year-on-year to reach an average of 339,824 tonnes in May 2021 (Figure 6).Over the same time span, certified stocks in the United States soared from 1,904 tonnes to 40,564 tonnes. 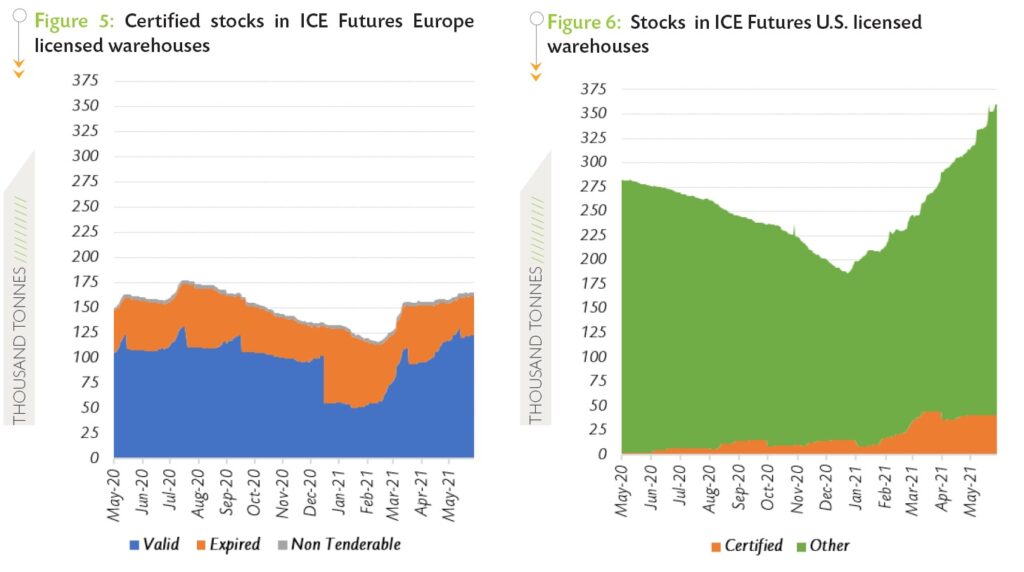 As seen in Figure 7 and Figure 8, origin differentials on prices of the six-month forward cocoa contract in Europe and the U.S. for Ghana, Côte d’Ivoire, Ecuador and Nigeria continued to decline in May as compared to their levels recorded at the beginning of the 2020/21 cocoa year.

In Europe, the differential for Ghanaian cocoa stood at US$442 per tonne in May 2021, 34% lower compared to US$672 per tonne recorded in October 2020. Similarly, the origin differential was discounted by 52% from US$527 to US$254 per tonne for Ivorian cocoa beans. 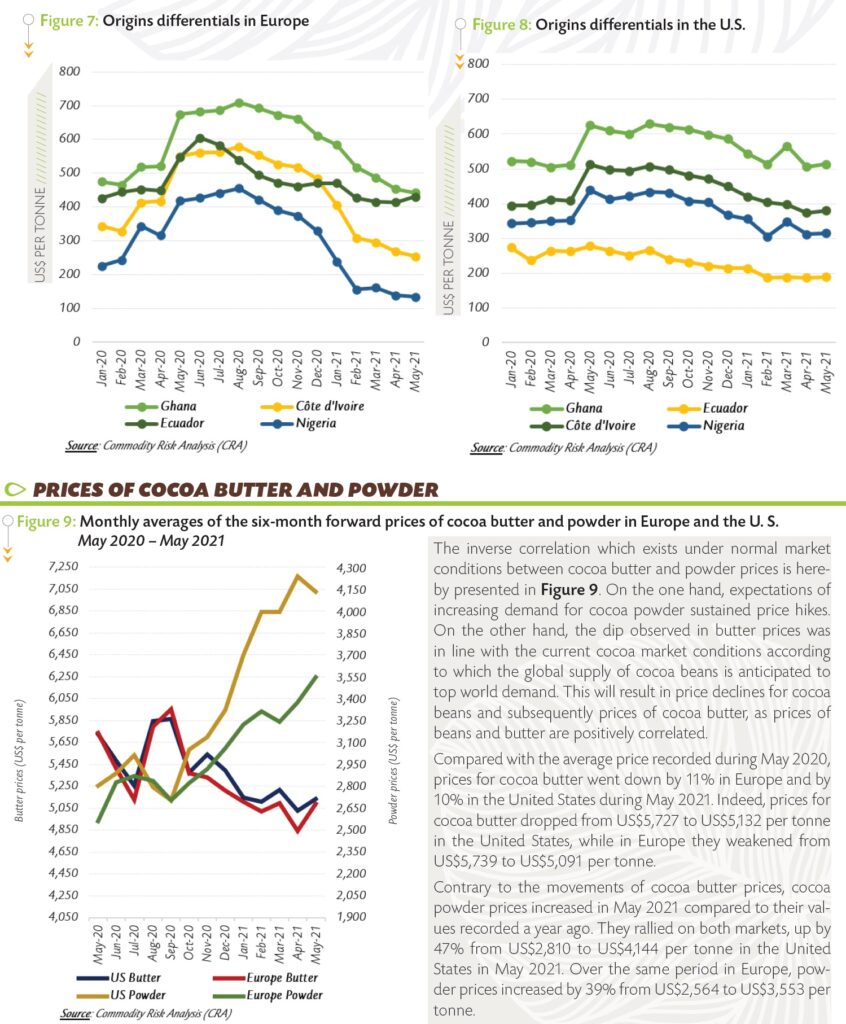 At the end of May 2021, cumulative arrivals of cocoa beans for the 2020/21 cocoa season in Côte d’Ivoire continued to beat all records. Indeed, as at 20 June 2021, cumulative arrivals at Ivorian ports were seen at 2.057 million tonnes, up by 6.3% compared to 1.936 million tonnes recorded a year earlier. Furthermore, cocoa processors in Côte d’Ivoire were reported to have ground 367,000 tonnes of cocoa beans at the end of May; representing a 2.7% drop compared to 377,000 tonnes processed over the corresponding period of the previous cocoa year.

The revised forecasts for the 2020/21 cocoa season published by the ICCO Secretariat in its latest issue of the Quarterly Bulletin of Cocoa Statistics suggest a production surplus of 165,000 tonnes. Increases in production and grindings are expected at 6.3% to 5.024 million tonnes and at 3.0% to 4.809 million tonnes, respectively.