ABIDJAN, Côte d’Ivoire – This review of the cocoa market situation from the International Cocoa Organization provides a brief on the December-2020 (DEC-20) and March-2021 (MAR-21) futures contracts prices listed on ICE Futures Europe (London) and ICE Futures U.S. (New York) during the month of October 2020. It aims to highlight key insights on expected market developments and the effect of the exchange rate on the US-denominated prices of the said contracts.

Figure 1 shows the development of the futures contracts prices on the London market while Figure 2 depicts the evolution of prices for the same futures contracts on the New York market at the London closing time. Hence, by monitoring the evolution of the US dollar index in October, one can extricate the impact of the US dollar exchange rate on the development of the futures prices – denominated in US dollar – during the period under review. Finally, Figure 3 presents monthly averages for cocoa butter and powder prices in Europe and the United States since the beginning of 2020.

As indicated in Figure 1 and Figure 2, both the London and New York markets were bearish during the month of October. Expectations of a strong crop size in Côte d’Ivoire for the 2020/21 cocoa year coupled with prospects of weaker demand for cocoa and chocolate products drove this overall decline in prices. Hence, compared to their settlement values recorded during the first trading day of the reviewed period, prices of the nearby cocoa futures contracts prices shrank by 9% on both markets moving from US$2,283 to US$2,079 per tonne in London and from US$2,509 to US$2,291 per tonne in New York. 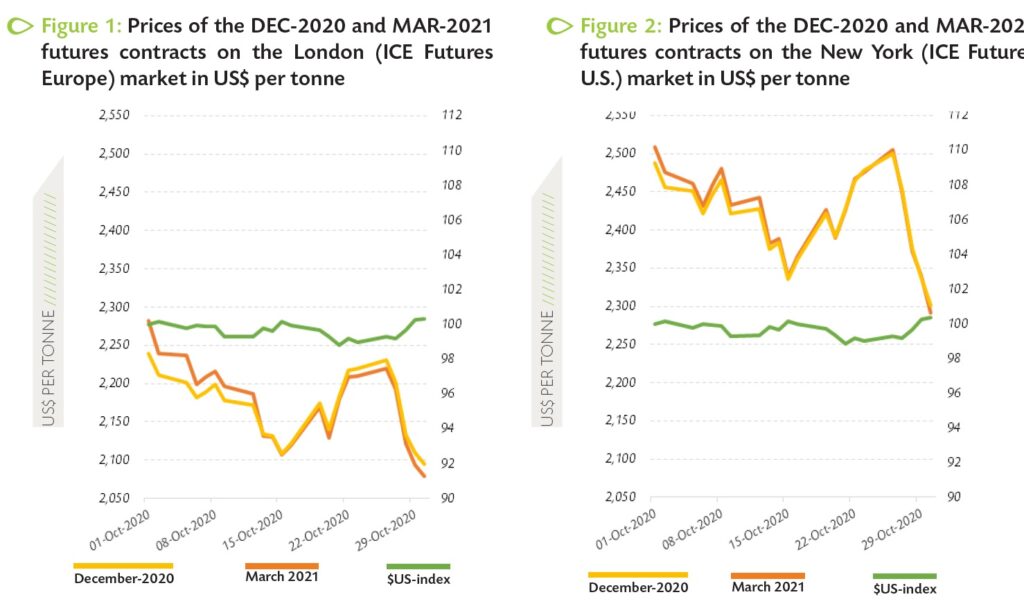 On closer inspection, three distinct price movement sequences emerged in the course of the month under consideration. During the first two weeks of October, the DEC-20 prices decreased by 8% from US$2,283 to US$2,107 per tonne in London while in New York, they contracted by 7% from US$2,509 to US$2,338 per tonne. At the time, market participants anticipated tighter grindings from the main regional cocoa associations.

In addition, conducive meteorological conditions prevailed in West Africa’s cocoa growing regions. However, over 16-26 October, the front-month cocoa futures contract prices halted their drop and bounced back on both markets, by 5% and 6% in London and New York respectively. In London, prices climbed from US$2,119 to US$2,220 per tonne whilst in New York, they were boosted from US$2,365 to US$2,505 per tonne.

This short-lived recovery in prices in the cocoa market was partly fuelled by a slight depreciation of the U.S. dollar. During the last four trading days of October, higher year-on-year arrivals were seen at Ivorian ports (an increase of 10.7% from 287,000 tonnes to 317,000 tonnes). New lockdowns were also announced in Europe to curb the rapid propagation of the COVID-19 in the region. As a result, cocoa prices halted their hike; tumbling by 5% from US$2,193 to US$2,079 per tonne in London, and by 6% from US$2,450 to US$2,291 per tonne in New York.

Movements of cocoa futures and cocoa butter prices in the cocoa market are generally positively correlated, whereas the inverse occurs with cocoa powder prices. Figure 3 shows that compared with the average prices recorded at the start of the year 2020, prices for cocoa butter were down during October in both Europe and the United States. Indeed, they tumbled by 21% from US$6,824 to US$5,374 per tonne in the United States, while in Europe they weakened by 18%, moving from US$6,549 to US$5,371 per tonne. 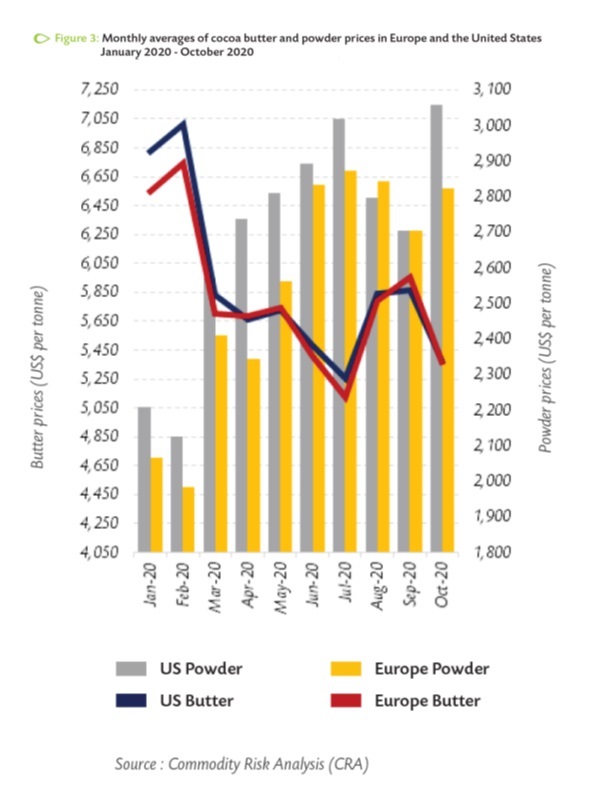 Furthermore, compared to the average values recorded during the first month of 2020, the front-month cocoa futures contract prices were discounted by 14% from US$2,516 to US$2,175 in London at the end of October 2020. Likewise, in New York, prices of the nearby cocoa contract dwindled by 9% from US$2,675 to US$2,423 per tonne over the same period.

On the demand side, a worldwide bearish stance was seen in the Q3-2020 grindings figures released by the main regional cocoa associations. Indeed, the European Cocoa Association (ECA) published data showing a year-on-year decrease of 4.74% to 345,730 tonnes in grindings while the Cocoa Association of Asia (CAA) announced a decline of almost 10.07% to 202,665 tonnes.

In the same vein, processing activities weakened in North America during the third quarter of 2020 with the National Confectioners’ Association (NCA) reporting a 4.02% reduction to 118,260 tonnes of cocoa beans grinded.