ABIDJAN, Côte d’Ivoire – The current report provides a description of the fundamental factors that influenced the movements of cocoa futures prices and focuses on the December-2021 (DEC-21) and March-2022 (MAR-22) futures contracts as listed on ICE Futures Europe (London) and ICE Futures U.S. (New York).

Figure 1 shows price movements on the London and New York futures markets respectively at the London closing time in October 2021, while Figure 2 presents similar information for the previous year.

Despite the backwardation observed in London over the first half of October, both the London and New York markets were in contango during October 2021, with the DEC-21 contract pricing lower than MAR-22 (Figure 1). Under normal market conditions, futures contracts with later expiries are more expensive than the nearest contracts to account for the cost of carry. 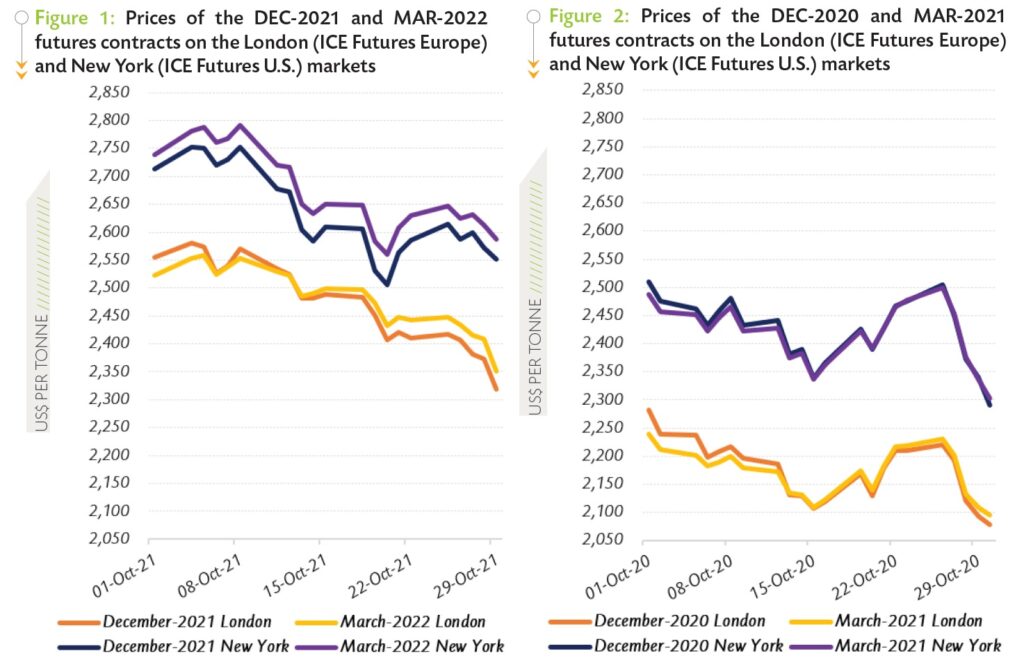 The average discount applied on the DEC-21 contract via-à-vis MAR-22 stood at US$9 per tonne on the London market and was lower compared to the discount of US$40 per tonne recorded for the same futures contract on the New York market.

The lower average discount applied to the DEC-21 contract in London was a result of the price configuration change – from backwardation to contango – that occurred during the second half of the month under review, whereas in New York, prices remained in a permanent contango. As shown in Figure 2, a lesser form of backwardation was observed on both sides of the Atlantic over October 2020, in particular over the first half of the month.

The global cocoa market was bearish during the first month of the 2021/22 cocoa year. On both the London and New York markets, prices of the front-month cocoa futures contract witnessed pronounced drops.

Prices declined as a result of excess supply despite the year-on-year increase in grindings for the third quarter of 2021 reported by the main regional cocoa associations. 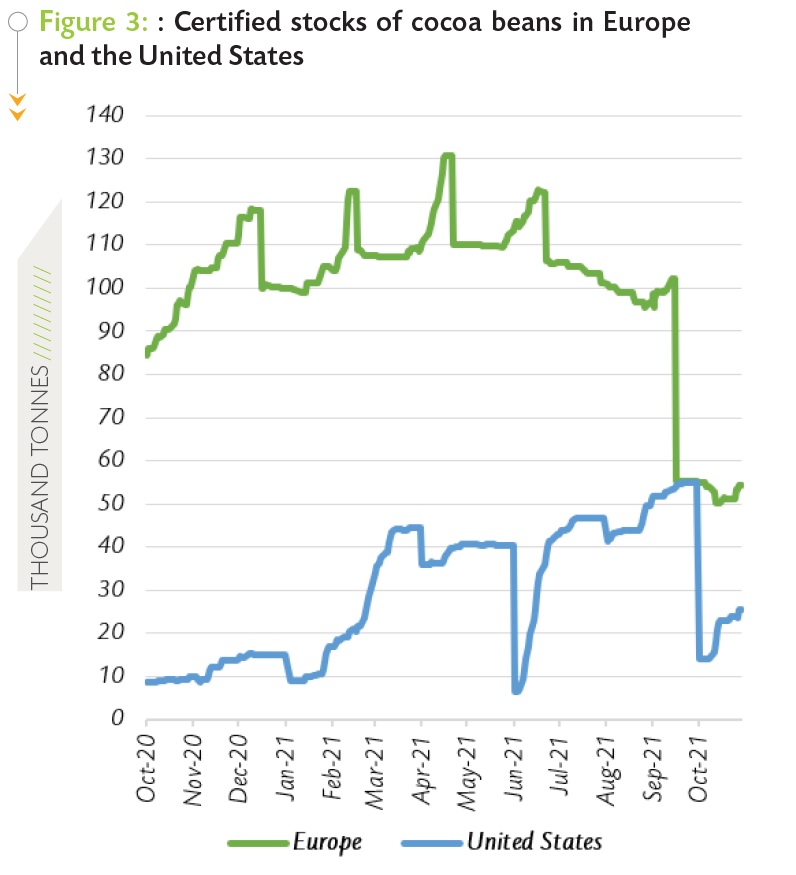 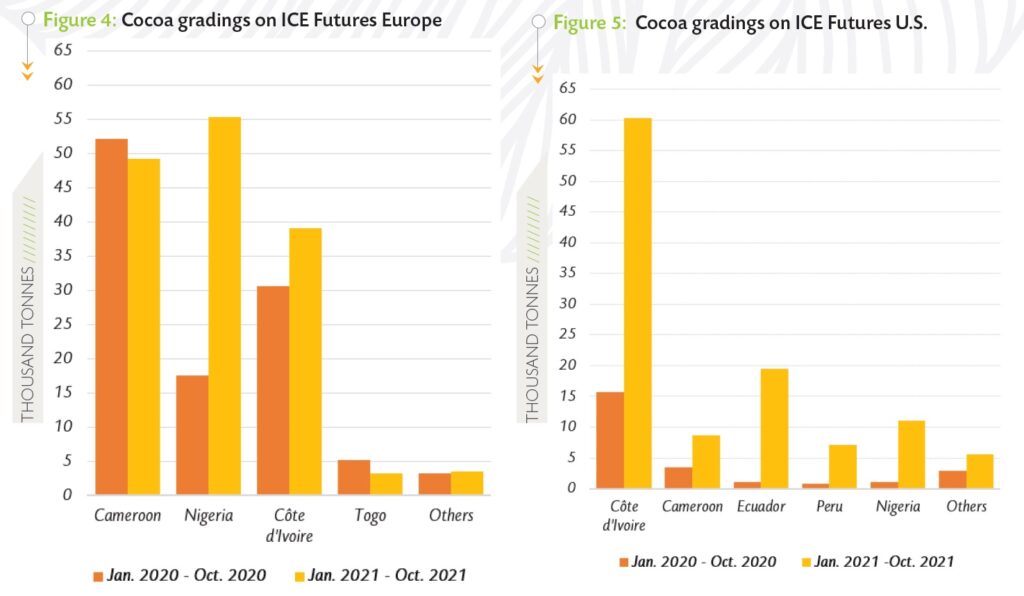 Over the first ten months of 2021, 150,430 tonnes were graded on the ICE Futures Europe, representing a 39% growth compared with 108,590 tonnes of cocoa graded over the corresponding period of the previous season. In the course of the above-mentioned time frame, the quantity of Cameroonian cocoa beans graded at the exchange was reduced from 52,110 tonnes to 49,200 tonnes.

Compared to their levels recorded in October 2020, origin differentials over prices of the six-month forward cocoa contract in Europe and the United States for Ghana, Côte d’Ivoire, Ecuador and Nigeria followed a downwards trend in October 2021 (Figure 6 and Figure 7). 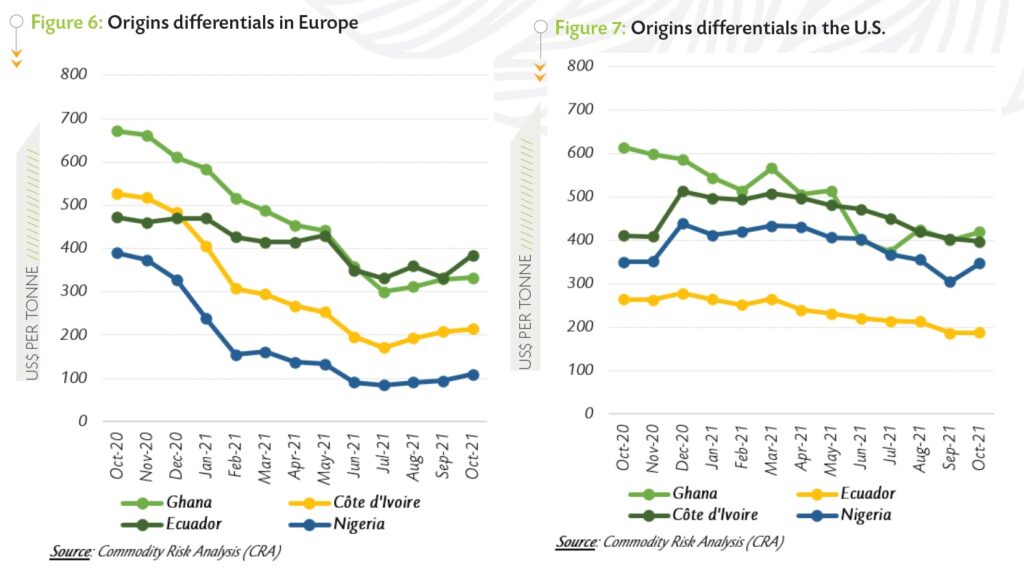 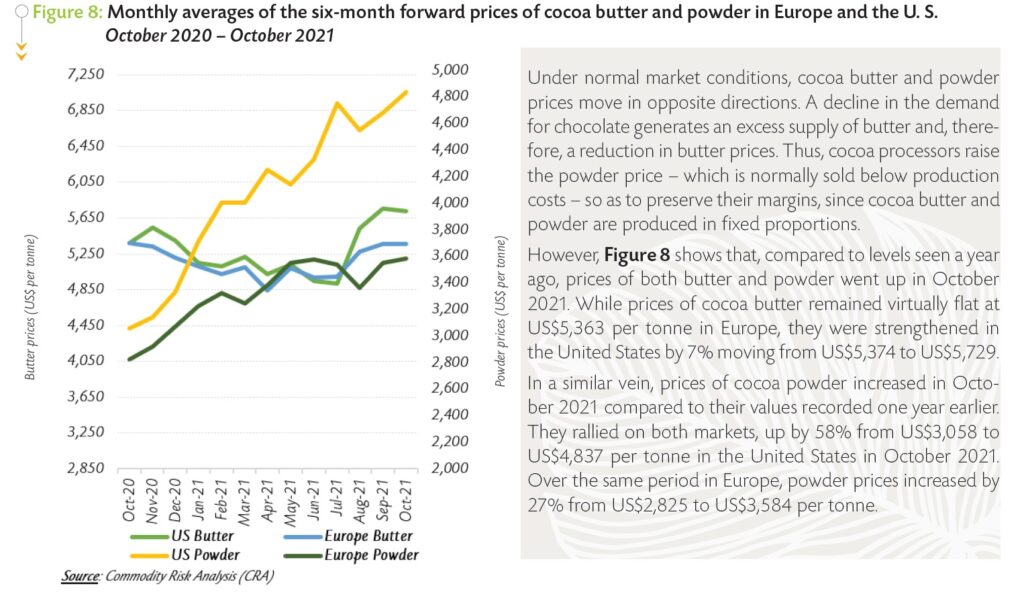 Since the start of the 2021/22 cocoa season, cumulative arrivals of cocoa beans in Côte d’Ivoire have been tighter year-on-year. Indeed, as at 15 November 2021, cumulative arrivals at Ivorian ports amounted to 489,000 tonnes, down by 10.9% compared to 549,000 tonnes recorded a year earlier. Furthermore, the country was reported to have exported 1.626 million tonnes of cocoa beans during the 2020/21 cocoa year against 1.572 million tonnes during the same period of the 2019/20 cocoa season.

In October, data published by the main regional cocoa associations for the third quarter of 2021 indicated that grindings substantially increased in Europe, South-East Asia and North America. Figure 9 shows that the European Cocoa Association (ECA) published data indicating a year-on-year expansion of 8.7% from 345,730 tonnes to 375,811 tonnes in grindings.

Similarly, the Cocoa Association of Asia (CAA) posted a year-on-year increase of 4.1% from 202,665 tonnes to 210,970 tonnes. Furthermore, processing activities improved in North America during the third quarter of 2021 with the National Confectioners’ Association (NCA) reporting a 4.3% increase from 118,264 tonnes to 123,399 tonnes of cocoa beans grinded. 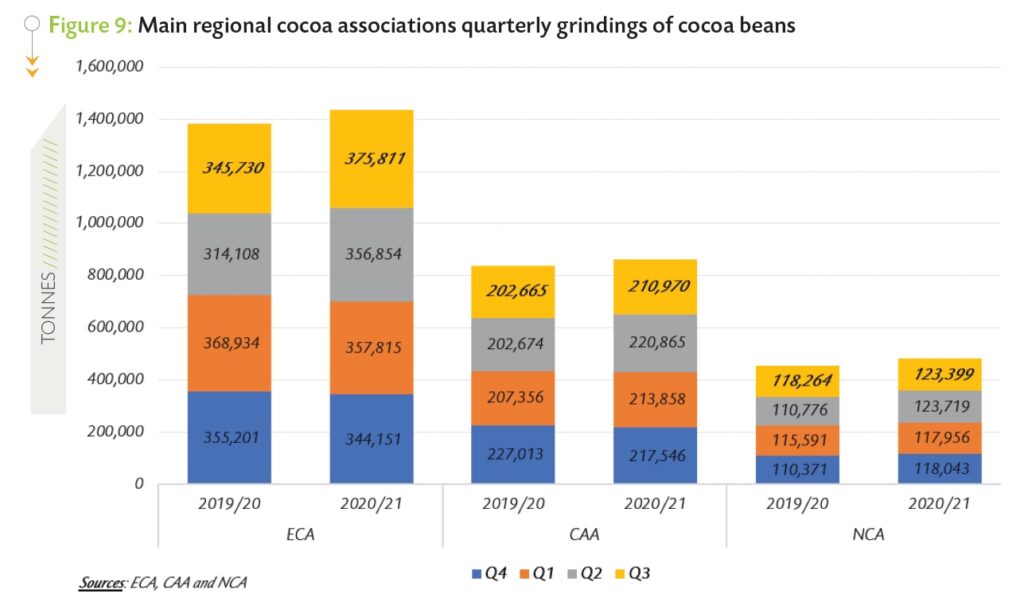