Coca-Cola completes refranchising of bottling operations in the U.S. 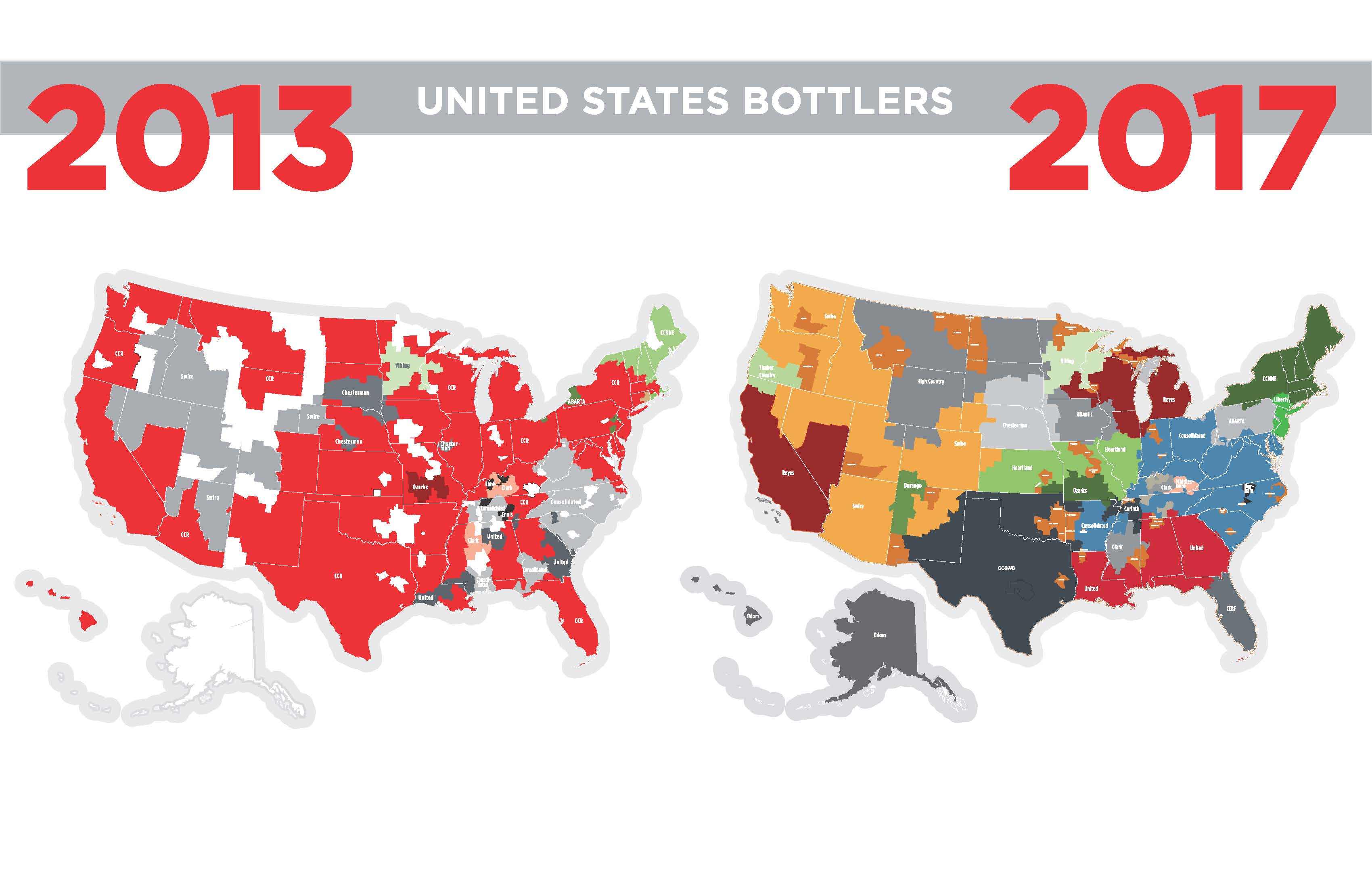 ATLANTA, U.S. – Nearly a decade ago, The Coca-Cola Company began a journey to reshape its bottling system in North America with a plan to return the ownership of bottling operations to where they best perform – in the hands of local bottling partners.

Today, the company marks a major milestone as nearly 70 independent Coca-Cola bottlers across the United States are now running their trucks and bottling operations as a fully refranchised system.

Three major territory closings occurred over the weekend to reach this historic milestone:

With the closing of these U.S. transactions, Coca-Cola North America has completed the company’s largest refranchising initiative. The company and its U.S. bottling partners have worked together to execute 60 transitions, which include 350 distribution centers, over 50 production facilities, over 55,000 employees and over 1.3 billion physical cases of volume.

A fully refranchised system in the United States finalizes the installation of Coca-Cola’s 21st Century Beverage Partnership Model. This transition has built an agile system to deliver value to customers with scale across supply chain, information technology and customer support through independent, local companies that know their communities and customers best.

“We are reshaping our business and accelerating our transformation to become a total beverage company,” said J. Alexander “Sandy” Douglas, Jr., president of Coca-Cola North America.

“Our system is built to respond to consumers’ needs in a fast-moving and highly competitive environment. Returning the local part of our business to where it really belongs and will best perform – in the hands of local companies – is a key enabler of the exciting transformation and growth of our business.”

The U.S. Coca-Cola system is now made up of a diverse array of independent bottlers, from multinational owners to decades-old, family-held operations.

This new system is working to reinvent the future of the business, especially in key areas such as portfolio diversification, packaging innovation, production, procurement, technology and pricing.

Most new or expanding bottlers are hiring more people and investing in plants and equipment.

The new system also operates on a new IT platform that enhances efforts to digitize the Coca-Cola system and significantly improves the ability to coordinate and manage information across bottling partners at both local and national levels.

“Transforming to our new 21st Century Beverage Partnership Model makes our routes to market and our national and local partner touch points stronger than they’ve ever been,” said Todd Beiger, senior vice president, System Transformation, Coca-Cola North America. “The energy brought by our system partners during the refranchising process has been truly inspiring, and we’re excited to carry the momentum into our new operating model.”

Added Bruce Karinshak, vice president, System Transformation, Coca-Cola North America: “Bottlers bring a personal and local touch to their relationships, which is critical to the success of our newly transformed system and the competitive advantage to our business. A tremendous amount of time and effort was required over the years for the transition to our 21st Century Beverage Partnership Model, and with the collective teamwork and passion between the company, CCR and bottling partners, the transitions have been impressively seamless.”

The Coca-Cola Company began working with its bottling partners a decade ago on plans to develop a model that evolves the system to serve the changing customer and consumer landscape, with a focus on creating stronger system alignment.

The Coca-Cola Company has accelerated the implementation of the new model by strategically addressing the bottling system, customer service, product supply and a common information technology platform.

Coca-Cola North America’s refranchising plan will conclude with the completion of transactions in Canada and the U.S. Virgin Islands, which are anticipated in the first half of 2018.