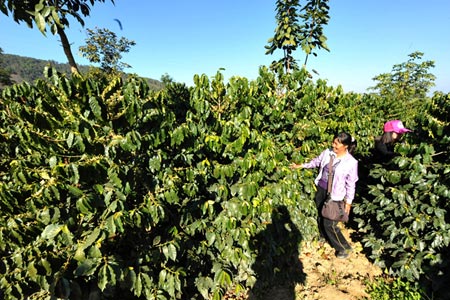 YUNNAN (China) – Coffee growers in southwestern China’s Yunnan province have managed to expand rapidly despite drought conditions and a four-year slump in sales.

This although the drop in coffee prices earlier this year indicates that further efforts are required to strengthen the industry, according to the country’s largest instant coffee producer.

Xiong Xiangru, president of the Yunnan-based Dehong Hogood Coffee Co, told the Chinese-language National Business Daily on Sept. 25 that stepping up production and intensifying efforts to build the brand and the industry chain would help raise the profile of Yunnan coffee in the global market.

A survey conducted by the Coffee Association of Yunnan at the end of August showed that coffee farms in the province had surpassed 1 million mu (66,667 hectares) in area — a target the local government had set for 2015 as part of its coffee industry development plan.

While the coffee beans produced in Yunnan account for 98% of China’s total output, Xiong said the amount was only 2% of overall global production, rendering Yunnan coffee a minor player in the world market.

Hu Lu, deputy secretary-general of the association, said that in order to command greater pricing power in the global market, Yunnan coffee should follow the example of Jamaica’s Blue Mountain coffee and improve its visibility in the market.

Xiong added that the local industry would also have to venture into the deep processing of coffee beans to exert greater influence on global coffee futures.

Chinese companies operating in the sector, however, are also facing increasing competition from global coffee brands that are expanding their operations in Yunnan, the newspaper said.

Swiss multinational food company Nestle, which has provided technical support to the local industry for ensuring the high-quality beans supplied from Yunnan, announced in early September that it plans to speed up its Yunnan coffee project.

Earlier this year, global coffee chain Starbucks also signed a joint-venture agreement with Yunnan-based Ai Ni Group to increase its purchase of beans from the region, the newspaper added.

Meanwhile, Hu added that the growing global production of coffee this year is expected to cast a shadow on coffee prices, which have already dropped to multi-month lows, with the impacts from the slowing US economy and the European debt crisis to continue into the near future.

While Yunnan, along with other major coffee-bean producers — Brazil and Vietnam — is expecting a good harvest later this year, a view in the industry is that purchase prices are likely to be higher than 20 yuan (US$3.17) per kilogram at the beginning of this year and may reach 25 to 28 yuan (US$3.96 to US$4.44) per kilogram, according to the newspaper.