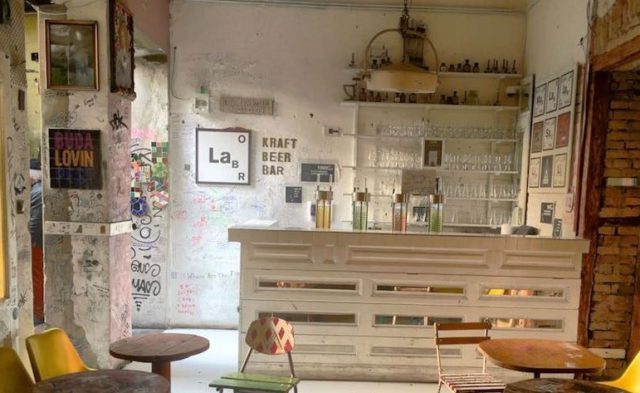 Go to Budapest’s VII district any night of the week and you would think it was rush hour: the streets are crowded with young people speaking every European language, who have come here to enjoy themselves.

They will be heading for one of the many pubs and bars that have breathed new life into the old Jewish quarter, an area largely abandoned in the socialist era, when the modern suburbs were the place to be.

“15 years ago, when Szimpla opened, there were just a few dreary bars that no one went to. Now, in a two square-kilometre area, there are 450 locales, including 250 bars,” says Orsolya Liptay, an organiser of events at the establishment at the centre of this rebirth, and still the most popular.

“The district was depopulated, and owners of property there had no wish to invest in renovating buildings that were falling apart. But at the same time, because these buildings were in the historic centre, they couldn’t be pulled down,” explains Daniel Bandoh, manager of the Doboz Ruin Club.

“So they rented them out cheaply to young entrepreneurs with lots of ideas, who wanted to open places for people to socialise in. To begin with they were frequented by Hungarians, then the foreign tourists started arriving, and now Budapest has been transformed into a paradise for people from all over the world who want to drink and have fun.”

A ‘Copernican revolution’ for the city, which, say those involved, was done on a shoestring, but with lots of creativity and entrepreneurial spirit.

“You won’t find two pieces of furniture that are the same in these places,” says Bandoh.

“We decorate them with pieces by young Hungarian designers, like the gorilla with brightly-lit eyes clinging to the 320-year-old tree (the oldest in the district) in our courtyard, by Szőke Miklós Gábor.”

Each locale has different layers of character, with their own style and purpose. A perfect example is Szimpla, which has spaces inside and an outdoor area: it has eight bars, a concert hall with 200 seats, a recording studio, cinema and workshops.

Every Sunday a busy farmers’ market is held there and at night there are theatrical performances, fashion shows, art exhibitions, animation festivals, a bicycle market and no end of courses ranging from cookery and languages to dog sitting. A “war machine” that attracts 5,000 people in one evening.

Social networking played a key role in making the VII district a success, at home and abroad.

And that’s because these welcoming, brightly-coloured bars that stay open all night as epicentres of fun and entertainment, with their quirky furnishings and ever-changing art installations are extremely photogenic.

In fact they look as if they were made to be posted on social media and ‘liked’ to the point of going viral. So it comes as no surprise that social media are just about the only way the bars and the events held in them are promoted.

There are places designed to take selfies in, to spread the word on Instagram, with photographers ready to take snapshots that will appear on Facebook the next day, and the people in them duly tagged.

Walking through these streets just ten years ago no one could have imagined the developments would take place, but that is precisely what happens nowadays: things change rapidly and are constantly evolving. Budapest’s district VII is perfectly in tune with the Zeitgeist.

Swedish fika: Here is where you can enjoy a nice cup of coffee in Stoc...