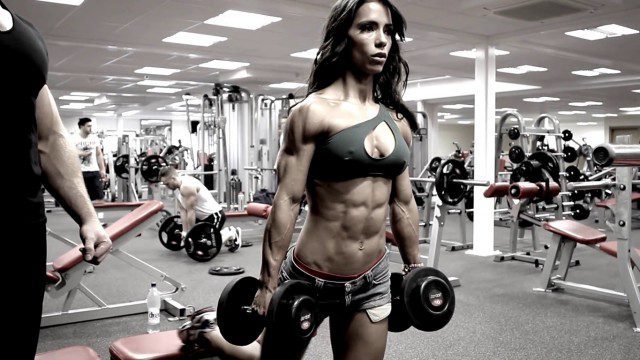 NEW YORK – Celebrity Fitness trainer Jillian Michaels, who recently revealed that through her company Empowered Media, she purchased a controlling interest in Luck Jack Coffee Co., poses with the product and her manager/business partner Giancarlo Chersich. According to its owners, Lucky Jack is the first bottled line of organic, nitrogen-infused cold brew coffees.

On Tuesday, Jan. 19, when celebrity fitness expert Jillian Michaels premieres her new reality TV series Just Jillian on E!, viewers can peek at the “everyday” lives of Michaels, her partner, Heidi Rhoades, and their two children, Lukensia and Phoenix.

Michaels, who spent a decade as a tough-love fitness coach on NBC’s The Biggest Loser, calls her new show ”a big, gay Modern Family.”

Viewers will also get a good look at the hectic lifestyle of Michaels the entrepreneur. Her health and fitness-related empire includes best-selling books, a fitness training program called Bodyshred and a line of healthy grab-and-go meals called Slim Soul by Jillian Michaels.

The latest addition to her empire is Lucky Jack Organic Coffee Co., the maker of a bottled organic cold-brew coffee that’s infused with nitrogen for a frothy head. Earlier this month, Michaels’s led an investment group that purchased a controlling stake in the Las Vegas coffee startup from founder Richard Karno for an undisclosed sum.

Spoiler alert: Michaels told me that she’s often seen holding a bottle of Lucky Jack in the first season of Just Jillian. And if the show is renewed for a second season, you can bet you’ll be seeing more about her experiences building the fledgling brand, she said.

What fewer people know is that Michaels, along with her business partner and manager Giancarlo Chersich, has been regularly investing in food brands since 2008 – everything from Popchips , potato chips that are popped, not fried, to Krave Jerky, which founder Jon Sebastiani sold to the Hershey HSY +0.00% Company for $220 million in January 2015, to Thrive Market, a socially minded discount buying club for health food products.

I recently chatted with Michaels and Chersich about the reality show, their recent acquisition and their investment philosophy. What follows are edited excerpts of our conversation.

Robin D. Schatz: Jillian, tell me about your new TV show and how it fits in with your entrepreneurial goals.

Jillian Michaels: It’s really about the comedy of errors that occur and the minutia of our everyday lives. It’s fun, it’s funny and heartfelt. It gives Giancarlo and me an excellent platform to showcase our projects.

While it isn’t the primary focus of the show, from a business perspective we’d be idiots if we didn’t exploit the opportunity to the fullest of our ability. For instance, if we purchased a coffee company – like Lucky Jack, which we did — then, of course that would be something you see on the show. And, of course, the story will be told in a very entertaining way.

Schatz: How did the two of you get started investing in food brands?

Giancarlo Chersich: Our first investment was based on a cold call that I placed to the then-CEO and cofounder of Popchips, Keith Belling. Basically Jill and I had experienced the product and Jill was impressed by not only the taste but the simplicity, how clean the snack was.

So we set up a strategy to be passive investors in some brands that aligned with us and where it made sense, we would use Jillian’s celebrity and trust with the consumer to help generate brand affinity and foot traffic at retail. We’re really making decisions based on what Jillian believes in the product and then what I believe in the operation and management.

Schatz: So, what specifically got you interested in Lucky Jack?

Michaels: I’m a coffee person. But there are some issues with coffee. For example, coffee is the second-highest sprayed crop in the world. In addition, how you brew your coffee can have an impact your health. Studies have shown us with coffee that’s hot-brewed, some individuals can actually raise their LDL levels, which is also bad.

The key is how to strip out the bad stuff. So when I looked at what was out there, Lucky Jack was the only organic cold brew. It’s just a cool product, a cool label, a cool bottle, and I said to Giancarlo, ‘I’m telling you, this is my favorite thing. Everybody who tries it loves it.’

Schatz: Why did you decide to acquire Lucky Jack outright?

Chersich: When we started to do our due diligence we quickly realized there was a greater opportunity here. So, I said to Jill, ‘how would you feel about operating the company?’

And she said, ‘well, that’s what you would do.’ And I said, ‘I think we can do this. We put together a small group and have a controlling interest in the company. I am the acting CEO.

We wanted to have more control of the destiny because it’s such a hot category with cold brew and with us having the first nitro-cold brew in a bottle . We wanted to take a little bit of a bigger risk and hopefully develop something that will make a lot of noise in the category and become a fan favorite.

The next four days, I’ve got major meetings with major retailers about placing this product. We are actively looking to grow this business from ground zero to $25 million in two years. That’s how hot this category is.

Schatz: Giancarlo, what do you know about the food business?

Chersich: I don’t even drink coffee; I drink water. Here’s what I do know about the food space. With our passive investments and being around a lot of individuals who operate food, whether it’s the relationships we have directly with big food, or whether it’s the new better-for you small brands that are being born every day, I have learned a lot. More importantly, I find myself being able to call upon those who know more than me and take direction and insight and springboard my ideas for what I want to do.