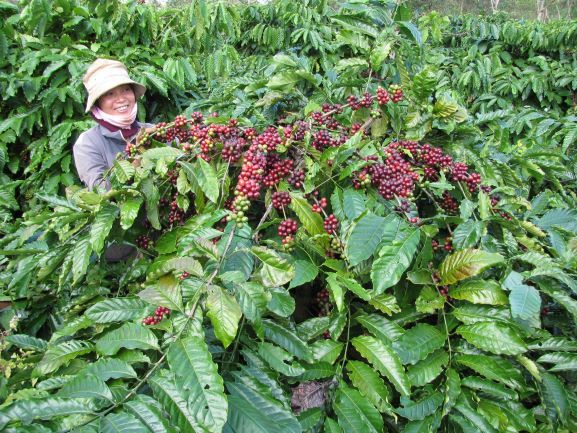 HANOI – The latest report Gain report from USDA’s Foreign Agricultural Service forecasts Vietnam ’s coffee production for marketing year 2020/21 to reach 30.2 million bags, down 3.5 percent from the previous year, due to unfavorable weather conditions. Post revised estimates of MY2019/20 bean exports down to 23.5 million bags, lower than the USDA official number, due to competition from foreign markets. Post forecasts MY19/20 and MY20/21 ending stocks up on low prices in MY19/20 and the resulting high carryover.

Vietnam’s MY19/20 harvest began in October 2019 and ended in January 2020. Post revised MY19/20 production down to 31.3 million bags, lower than the USDA official number, but three percent higher than the previous year.

According to Vietnam’s Ministry of Agriculture and Rural Development (MARD), the total coffee replantation and grafting area in the Central Highlands over the past five years reached 118,000 hectares (HA), mainly in Lam Dong and Dak Nong Provinces. (Note: MARD had originally planned for 120,000HA.) From now until 2025, MARD plans to expand the re-planted and grafted area by 30,000 to 40,000HA to replace old trees and improve yields.

Evidentially, declining area and production in Dak Lak, the largest plantation province, was offset by progress in Lam Dong and Dak Nong Provinces.

MARD’s policy is to maintain coffee cultivation in the Central Highlands steady at approximately 600,000HA and switch to other crops where conditions are not favorable for coffee cultivation. Therefore, coffee farmers in some areas are reportedly switching to more profitable fruit crops such as durian, avocado, mango. Traditionally, pepper was a preferred substitute when coffee prices decreased, but pepper prices are unstable and recently falling to a five-year low.

In MY20/21, Post forecasts production down to 30.2 million bags due to unfavorable weather conditions that could affect yields. Data confirms dry weather with lower rainfall in the main growing areas of Dak Lak, Dak Nong, and Kon Tum Provinces .

According to the Vietnam Meteorology and Hydrology Administration, during the first five months of calendar year 2020, temperatures in the Central Highlands were 0.5-1.5 degrees Celsius above average, while cumulative rainfall was 15-30 percent lower than average.

The Mekong River Commission also forecasted moderate to extreme droughts in the Central Highlands from mid-March to May, documenting relatively low rainfall.

February to May are normally dry months and coffee requires irrigation to ensure proper blossom and cherry setting. However, low prices, especially in recent months, might discourage coffee growers from spending on irrigation, potentially reducing coffee yields in MY20/21. Nevertheless, rainfall levels may improve in the second half of the year, increasing yields.

Arabica production accounts for 3 to 4 percent of Vietnam’s total coffee production. It is mainly grown in elevations above 1,000 meters in remote mountainous areas with ethnic minority populations. Considering relative inaccessibility and difficulties with transportation, warehousing, and processing, cultivation expansion remains limited in these regions.

Coupled with unfavorable weather conditions, Post forecasts Arabica production in MY20/21 at slightly over 1.0 million bags, lower than the previous year.

The growth in both international and locally owned coffee shops, cafes, and vendors, is the main driver of the sustained increase in domestic consumption. In addition, instant coffee has gradually increased in popularity due to its convenience, capturing more local consumption.

COVID-19 has had a significant impact on Vietnam’s entire food and beverage (F&B) sector in the past two months. Under the Government of Vietnam’s (GVN) Directive 16, the Prime Minister ordered a 15-day nationwide social distancing policy, beginning on April 1, which was later extended to April 23, limiting F&B operations, including restaurants and cafes. Many F&B establishments physically closed during the social distancing period, with a limited number of businesses switching to online ordering and delivery.

While the increase of in-home consumption did not fully offset the loss of out-of-home consumption, it benefited packaged products, such as ground and instant coffee. Since the GVN lifted its social distancing requirements, consumers have been slow to reduce their household stocks. Some F&B businesses may face permanent closure or reductions, with others reopening in gradual phases.

The Vietnamese Prime Minister recently proposed reducing the country’s 2020 gross domestic product (GDP) growth rate target from 6.8 percent to 4.5-5.4 percent due to COVID-19. This potential slowdown may lead to increased cost-saving measures by consumers, such as preferring cheaper alternatives to high-end coffee products.

As a result of these ongoing uncertainties, Post forecasts a minimal increase in domestic consumption in the MY20/21 to 3.2 million bags.

COVID-19 has affected global trade flows for coffee, disrupting logistics and affecting demand following widespread lockdowns in many countries. Despite the gradual easing of social distancing requirements in many parts of the world, COVID-19’s impacts on trade may continue until the end of June.

Many researchers cited the International Monetary Fund’s forecast of a 3 percent drop in global GDP in 2020 and the International Coffee Organization’s study of the correlation between GDP growth and coffee consumption. Post revised its MY19/20 export estimates down to 26.3 million bags, lower than the USDA official number. High differentials of Vietnamese Robusta prices in the futures market diverted exports opportunities to Brazilian Conilon and Robusta from other sources, such as Indonesia.

Traders also noted that the ongoing currency depreciation in Brazil and pressure to sell the coming crop have pushed Brazilian farmers to de-stock quickly. According to some research cited by local industry, Conilon, which was only used in certain blends in the United States and other small niche markets, has recently found new markets. This included first-time importers such as Spain, Russia, and some African countries.

Exports of Vietnamese coffee in the first six months of the MY19/20 saw a 6 to 7 percent contraction from the previous year, to 12.8 million bags. Germany, the United States, and Italy continued to be the largest import markets.

As mentioned in the Consumption section, COVID-19 has spurred changes in global coffee consumption patterns, most notably causing a temporary switch from out-of-home to in-home consumption. Higher quality blends with higher Arabica contents are normally served in coffee shops, while packaged coffee designed for in-home consumption is generally of lower quality, with a higher ratio of Robusta.

This trend may continue post-COVID as global economic uncertainty may affect disposable incomes, causing consumers to move away from more expensive, high quality coffee products. Consequently, Arabica could lose market share to Robusta in the short to mid-term. Therefore, Post forecasts MY20/21 exports to rebound slightly to 26.9 million bags on the assumption of higher demand for Robusta and improving prices.

Post forecasts growth in soluble and roasted coffee exports at approximately 5 percent year-on-year. The instant coffee market is reducing its reliance on bulk exports which have faced unstable prices in recent years.

Vietnam continues to import small quantities of coffee beans, both green and roasted, and instant coffee from Laos, Indonesia, Brazil, and the United States to serve its growing high-end coffee retail chains.

However, Post revised its MY19/20 import estimates down to 0.7 million bags, lower than the USDA official number, due to impacts of COVID-19, and forecasts stagnant growth in MY20/21.

In the past two years, monthly export prices of common ungraded Robusta green been (FOB HCMC) decreased to a multi-year low, most significantly from January to April 2020. Industry stated that the depreciation of the Brazilian real made their coffee comparatively cheaper and affected the global futures market. As the supply of Robusta in Brazil, Vietnam, and Indonesia might tighten in MY20/21 due to smaller off-cycle crops and unfavorable weather conditions and Robusta demand might grow, Robusta prices may rebound in the coming months.

The decline in domestic prices mirrored that of export prices, which discouraged Vietnamese farmers from selling. Some sources said that farmers were expecting farm-gate prices at over 32,000VND/kg, but prices fell to below 30,000VND/kg in April.

According to industry, Vietnam is sitting on high stocks, including those at bonded warehouses and warehouses of traders, exporters, collectors, and farmers. As noted in the Price section, low farm-gate prices have discouraged farmers from selling beans, resulting in traders and exporters’ difficulties in buying beans for export. In addition, Vietnam has lost export opportunities to Brazil and other countries, leading to lower exports in MY19/20 and, consequently, higher stocks. Post revised MY19/20 stocks up to 4.6 million bags, higher than the USDA official number, and forecasts MY20/21 stocks at 5.5 million bags on high carry-over.